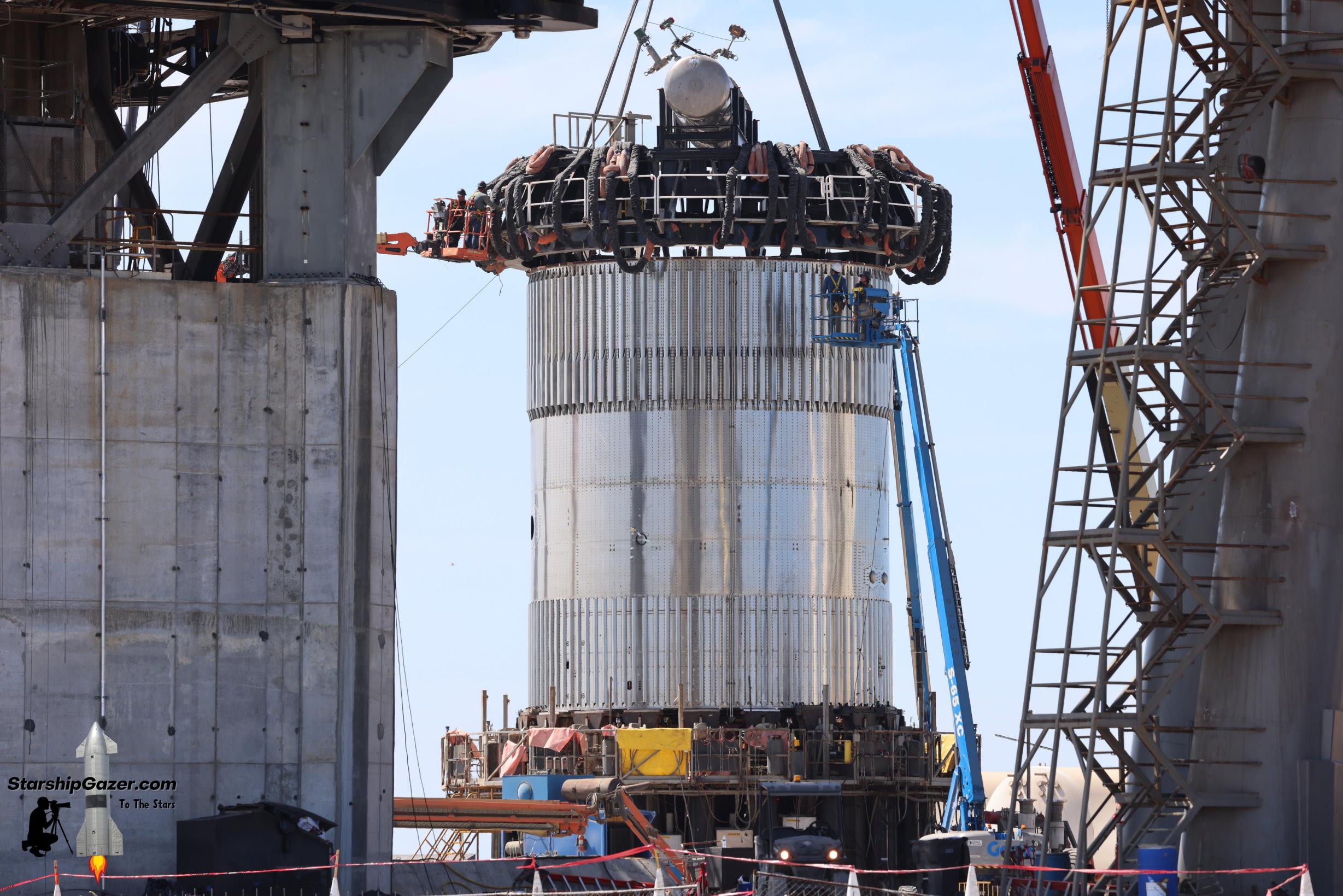 SpaceX is preparing to subject Super Heavy tank B7.1 to a test that will essentially try to crush it. (Starship Gazer)

A week after rolling a different ‘test tank’ from its South Texas Starship factory to nearby launch and test facilities, SpaceX has moved a second test tank to the pad.

Hearkening back to a period in 2020 where SpaceX built and tested six different Starship test tanks in a period of six months, the company appears to be preparing to test another batch of tanks in the hopes of qualifying Super Heavy booster design changes and clearing the way for a significant upgrade to all Starship tank domes. The sequencing of the latest tank raises some questions, however.

Known unofficially as the “EDOME” tank in reference to a cryptic label on the side of one of its halves, the first new test tank’s purpose is much more cut and dry. While its steel rings appear to be unchanged from current Starship and Super Heavy prototypes, the tank’s two domes share almost nothing in common with the dozens of domes SpaceX has built and tested over the last three years of development. The new domes are much simpler and should be easier to manufacture than the domes SpaceX is familiar with. Thanks to their more spherical shape, they should also be more efficient, allowing future Starship tanks to store a bit more propellant while taking up the same amount of vertical space. SpaceX has yet to begin testing the EDOME tank since its June 8th rollout and does not appear to be much closer to starting 12 days later.

On June 16th, SpaceX rolled a second test tank to the launch site, which eventually joined the EDOME tank at a staging area that used to be a Starship landing pad. Whereas the EDOME tank is more of a generic test article, the second tank – known as B7.1 – is specifically designed to test Super Heavy booster design changes.

B7.1 is a bit like a miniature Super Heavy. Its three-ring top section is mostly similar to the top section of a booster and is reinforced with dozens of external stringers. Oddly, it is missing cutouts for grid fins, and the tank’s forward dome does not have the reaction frame those hypothetical grid fins would anchor to. On the tank’s bottom half, the same stringers are present, and the tank features a new design that squeezes four slightly shorter rings into the same height as three. The Super Heavy thrust dome those rings enclose is also a new design that expands the number of central Raptor engines from 9 to 13.

It’s unsurprising that SpaceX wants to test those significant design changes. SpaceX did technically conduct a similar test in mid-2021 with a test tank known as BN2.1, but that tank featured a thrust dome with room for 9 older Raptors that would have generated about ~1700 tons of thrust. B7.1’s testing will go a step further than BN2.1 and use a structural test stand that should allow SpaceX to simulate the compressive forces Super Heavy boosters might experience in flight, adding another dimension of stress on top of the 13 hydraulic rams that will simultaneously subject the test tank to the equivalent of ~3000 tons (~6.6M lbf) of thrust.

And lift over to the crusher for a nice bit of torture. pic.twitter.com/SxV3BTs7ry

What is surprising, however, is the fact that SpaceX has waited so long to build and test a tank like B7.1. SpaceX has already completed an entire Super Heavy booster (B7) with all the design changes B7.1 is meant will test and recently installed 33 new Raptor 2 engines on that prototype. A second upgraded booster, B8, is also nearly finished. In that sense, B7.1 is quite unusual and feels more like a reluctant afterthought than part of a methodical development process. If B7.1 suffers an unintentional failure during testing, SpaceX could be forced to abandon two nearly-finished Super Heavy boosters, wasting months of assembly and testing and rendering prototypes that are likely worth tens of millions of dollars all but useless.

The design changes B7.1 is meant to test are not exactly radical, but it’s still unclear why SpaceX has chosen to conduct those tests after building two entire Super Heavy boosters. Earlier on in Starship development, SpaceX regularly used test tanks to qualify significant design changes before applying those changes to full prototypes, limiting the amount of resources that could be wasted on any unproven prototype. Thankfully, Super Heavy Booster 7 may have already completed similar Raptor thrust simulation tests on the same test stand B7.1 was recently installed on, meaning that SpaceX’s confidence may have been well-placed. However, if the first use of the ‘can crusher’ stand on a Super Heavy test tank finds any problems or ends in failure, B7 and B8 could still be easily rendered unusable or incapable of flight, significantly delaying Starship’s first orbital launch attempt.

Lately, SpaceX has been focused on preparing Starship S24 and Super Heavy B7 for static fire tests that could eventually qualify the pair to support the first orbital test flight. It’s not clear if or when SpaceX will be able to set aside time and evacuate Starbase’s busy orbital launch site to test B7.1 or the EDOME tank.