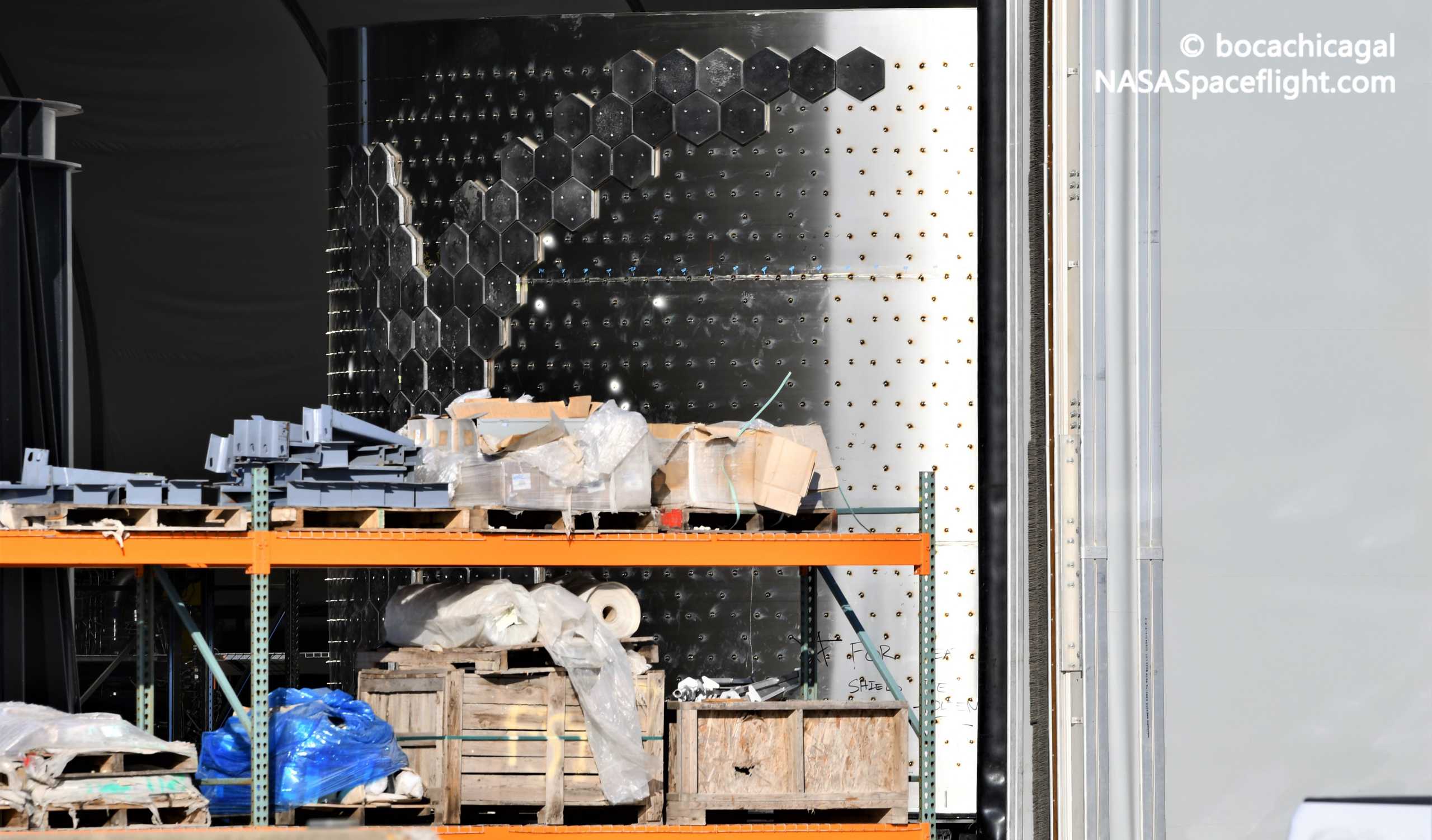 SpaceX has begun large-scale Starship heat shield installation tests with the help of robots delivered last month in a sign that the company has already begun preparing for the rocket’s first orbital flight test campaign.

Designed to eventually replace SpaceX’s workhorse Falcon 9 and Falcon Heavy launch vehicles, Starship is a fully-reusable two-stage rocket powered by methane and oxygen-fueled Raptor engines. Just like Falcon 9, Starship’s first stage (known as Super Heavy) will launch the combined spacecraft and upper stage to an altitude of 70 to 100 km (40-65 mi) and velocity of ~2.5 to 3 kilometers per second (1.5-1.9 mi/s). Super Heavy will separate, boost back towards land, and either land back at the launch pad or on a floating platform.

SpaceX already has extensive experience launching, landing, and reusing orbital-class rocket boosters thanks to Falcon 9 and Heavy, which have completed 57 landings and been reused 39 times in less than five years. The Starship upper stage, however, will have to survive orbital-velocity atmospheric reentries some 3 to 5 times faster and exponentially more energetic than Super Heavy boosters. To do so routinely while keeping Starship cost and complexity low and reusability high, SpaceX will have to develop an unprecedentedly effective heat shield that is easier to install, maintain, and reuse than anything that has come before it.

As with all SpaceX programs, the company began Starship heat shield installation development as soon as possible, installing a handful of tiles (presumably early-stage prototypes) on Starhopper as far back as H1 2019. This continued with small hexagonal tile installation tests on Starships SN1, SN3, SN4, SN5, and SN6 throughout 2020. While those coupon tests obviously didn’t involve orbital-class reentry heating or buffeting, they were still useful to characterize the mechanical behavior of heat shield tiles under the stress of cryogenic propellant loading, Raptor static fires, and hop tests.

In 2019, SpaceX even tested a few ceramic Starship heat shield tiles on an orbital Cargo Dragon mission for NASA. The fact that no more orbital Cargo or Crew Dragon tests were acknowledged seems to suggest that the demonstration was a success, proving that the tiles can stand up to the stresses of reentry from low Earth orbit (LEO).

Behind the scenes, SpaceX is assuredly performing extensive laboratory-style tests with tiles and an agreement signed with NASA Ames Research Center confirmed that the company is using the facility’s arcjet to physically simulate the conditions of orbital-velocity reentry. Tests on the scale of a full Starship, however, are an entirely different story.

The first signs of large-scale heat shield installation testing appeared on July 9th when local resident and photographer Andrew Goetsch (Nomadd) captured photos of a test coupon covering half of an entire steel Starship ring. In April 2020, CEO Elon Musk confirmed on Twitter that the current design involved affixed heat shield tiles directly to Starship’s steel hull with steel studs. It’s unclear how exactly the company is installing steel studs directly onto the ~4mm (0.15 in) thick skins of a pressure vessel or if an off -the-shelf solution was available but Nomadd’s July 9th photos explicitly show the process required to refine the settings on the mystery stud installer.

One month after Nomadd’s spotting, three weeks after a robot delivery, and five days after one of those robots – labeled “HEAT SHIELD – was spotted in action, the first large-scale heat shield installation test article was spotted inside one of SpaceX’s several production tents. The team involved clearly had some fun with the process, installing the tiles in the form of a SpaceX “X”.

In retrospect, robots could be a perfect solution for the affordable, high-volume installation of the thousands of heat shield tiles a single Starship will need. Once tolerances are high enough, it’s conceivable that multiple different Starship sections could be individually outfitted with studs and heat shield tiles by robot, inspected by humans, and joined together to form a complete Starship. Humans would likely need to manually install a gap of tiles around the weld lines of those final sections, but the manual installation work would be reduced to a minimum while keeping the required infrastructure dead simple.

Ultimately, a great deal of work remains before SpaceX can even begin to feasibly attempt orbital Starship test flights, but it’s hard not to get excited by the fact that some of that preparatory work has already visibly begun in South Texas.