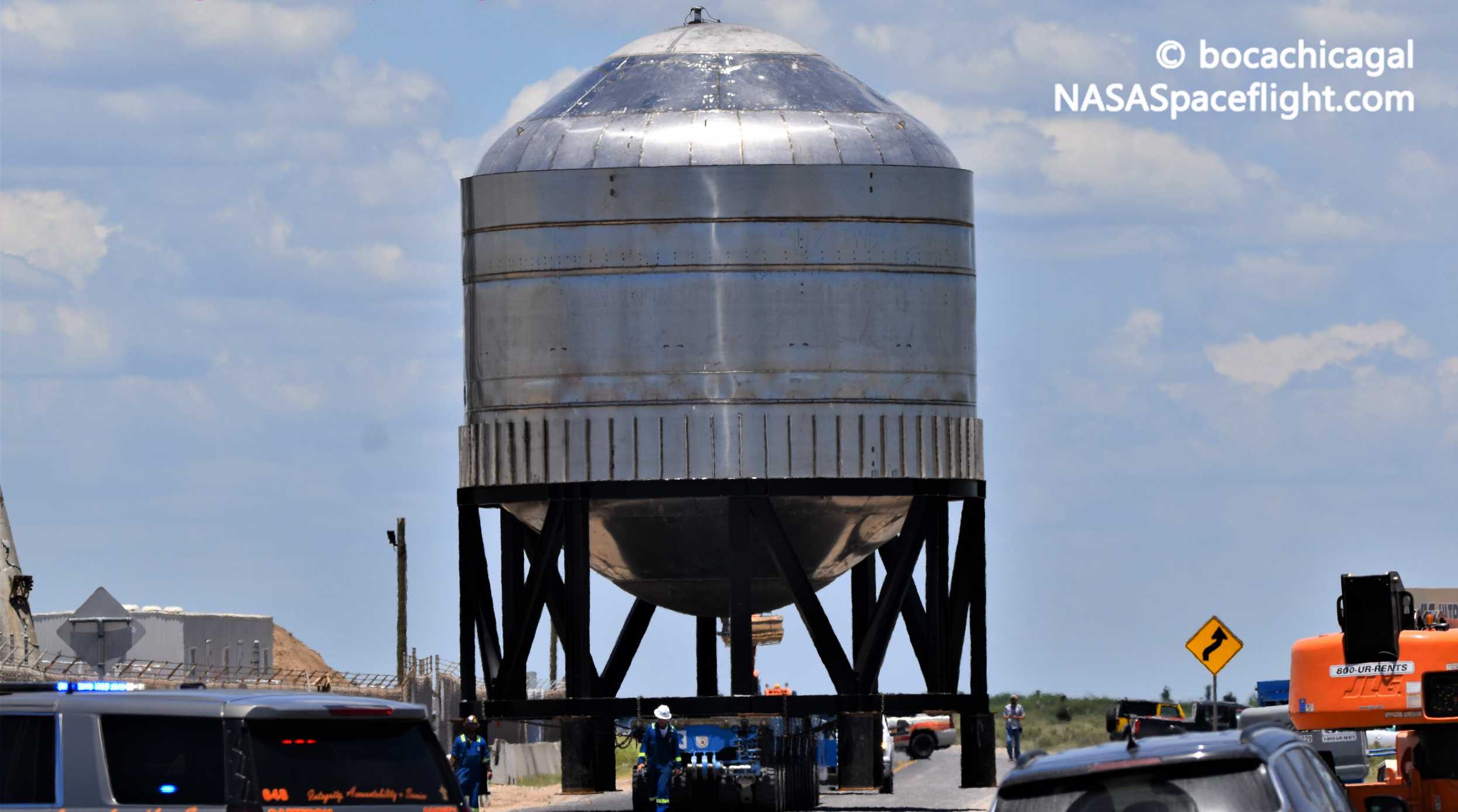 SpaceX appears to be re-upping a tried and true foundation of its Starship development with a new rocket 'test tank'. (NASASpaceflight - bocachicagal)

SpaceX’s Starship rocket development program has returned to its early-2020 roots as teams work to assemble the first new ‘test tank’ built in South Texas in more than three months.

Just like its three predecessors, the newest test tank’s purpose is relatively simple: demonstrate – at full scale – the efficacy of SpaceX’s current manufacturing processes. Back when SpaceX built and tested the first two tank prototypes in January 2020, the company was in the midst of making big changes throughout its coastal Boca Chica, Texas Starship factory – a major leap forward compared to the methods used to build Starship Mk1. While the first tank made it to 7.1 bar (~103 psi) before failing, a second tank survived all the way up to 8.5 bar (~125 psi), as did a third separate test tank built about a month later. According to CEO Elon Musk, 8.5 bar is more than satisfactory for Starship pressure vessels to safely launch humans into orbit, offering a safety margin of more than 40%.

Most recently, Starship SN4 became the first full-scale prototype to replicate the results SpaceX achieved with its shorter test tanks, effortlessly reaching 7.5 bar (~110 psi) during a cryogenic pressure test completed just last month. Despite those myriad successes, however, SpaceX rarely stops moving forward and Musk has already hinted at improvements the company may be hoping to prove out with a fourth Starship test tank.

The most obvious reason to build a new test tank after the success of full-scale Starship prototype SN4 is a substantial change in the steel alloy SpaceX is building rockets out of in South Texas. CEO Elon Musk has teased such a shift for almost a full year and it appears to have happened right on time – if not ahead of schedule. SpaceX currently uses 301 stainless steel for Starship production, while the new material – discussed earlier by Musk and confirmed by inscriptions on the exterior of what would later become the fourth test tank – is a slightly different 304 steel “with higher ductility” (malleability).

It’s unclear if this is the custom-built “30X” alloy SpaceX was planning on creating, given that “304L” steel is an already-available commodity material that is slightly more durable and corrosion-resistant but less ductile and ~10% more expensive than 301. Regardless, changing to a new alloy would almost certainly benefit from real-world testing to confirm that behaves in the ways SpaceX expects it to, while also verifying that existing fabrication methods (particularly welding) still suffice.

The only other notable visual differences between Starship Test Tank #4 and its predecessors are small changes in welding. On the new tank’s dome and ring, SpaceX has removed wavy strips of metal known as a weld doublers, used to strengthen vertical welds on all previous ships and test tanks. While only realizing miniscule weight savings, the change is a visual confirmation that SpaceX is growing more confident in its weld quality, perhaps also signifying the introduction of a new kind of welding.

Last but not least, the circumferential weld joining Test Tank #4’s dome and ring (a dark horizontal line) appears to be centered on the ring, whereas the domes of previous ships and tanks have typically been attached to the upper or lower 20-30% of their respective rings. The purpose of this change is unknown.

Regardless, Test Tank #4 is currently in the midst of an hours-long cryogenic proof test and appears to be almost fully loaded with several hundred tons of liquid nitrogen. Check out the frosty tank live at the link below as we wait to see if the Starship hardware survives.