The Tesla Cybertruck is expected to enter the electric vehicle market by the end of the year. The fact that the Cybertruck is still around 7-8 months away from production and deliveries has not stopped third-party companies, like Stream It, from inventing crazy mods for the all-electric truck. The CyberLandr, a mod that would make the Cybertruck completely liveable with the addition of a bedroom, kitchen, and bathroom, all within the vault of the truck, has already gained massive publicity and pre-orders: $50 million worth of future revenue, to be exact.

The Cyberlandr aims to make the Cybertruck completely liveable by its owners. While it would be more likely to be used as a deployable camper, it is confined to the bed, or vault, of the Cybertruck, and includes a bathroom, bedroom, and kitchen. While the CyberLandr adds 1,200 pounds to the weight of the Cybertruck, there is only an estimated 5% reduction in range.

When the Cyberlandr was unveiled on April 6th, it gained quite a bit of publicity and attention from everyone far and wide. It appears that Cybertruck owners were quite impressed with the idea, and a $5,000 deposit wasn’t too steep for many of the future owners to throw down. Stream It, the parent company of the Cyberlandr, announced that it has already taken in “more than $50 million in future revenue,” according to a press release.

Stream It, Inc. co-founder Bill French said, “We believe the enthusiasm is a direct result of people envisioning how this new adventure vehicle can improve their lives. People are telling us of many new uses for both wilderness and urban adventures. For example, parents at athletic matches, or the ability to boondock and overland to places previously inaccessible to a traditional RV. We estimate CyberLandr™ will be used 2-3 times more than traditional RVs because it is so easy to take with you.” 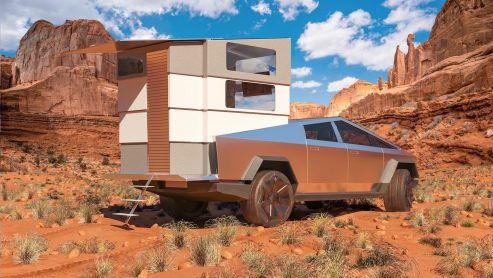 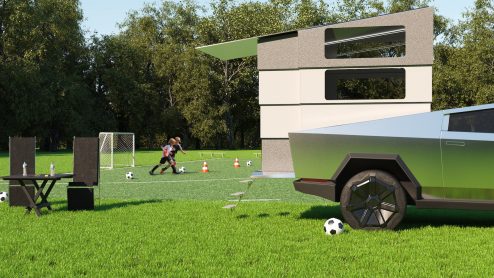 The development of the CyberLandr is still continuing, and Stream It is getting some advice from legendary teardown expert and well-known Tesla fan Sandy Munro. Munro has a notable presence in the EV space, especially after his teardown series on the Tesla Model Y last year. Munro & Associates was summoned by Stream It to “help ensure high quality while we scale manufacturing to meet demand,” CEO Lance King said.

King also believes that only a small number, about 10%, of Cybertruck reservation holders have seen the CyberLandr in the three weeks since its unveiling. He believes that an overwhelming number of Cybertruck orderers will inevitably place orders for the add-on, and conservatively estimates around 10,000 units in 2022.

The CyberLandr is available for $49,995, but the company is running several promotions that offer more savings for larger down payments. You can order one at this link.