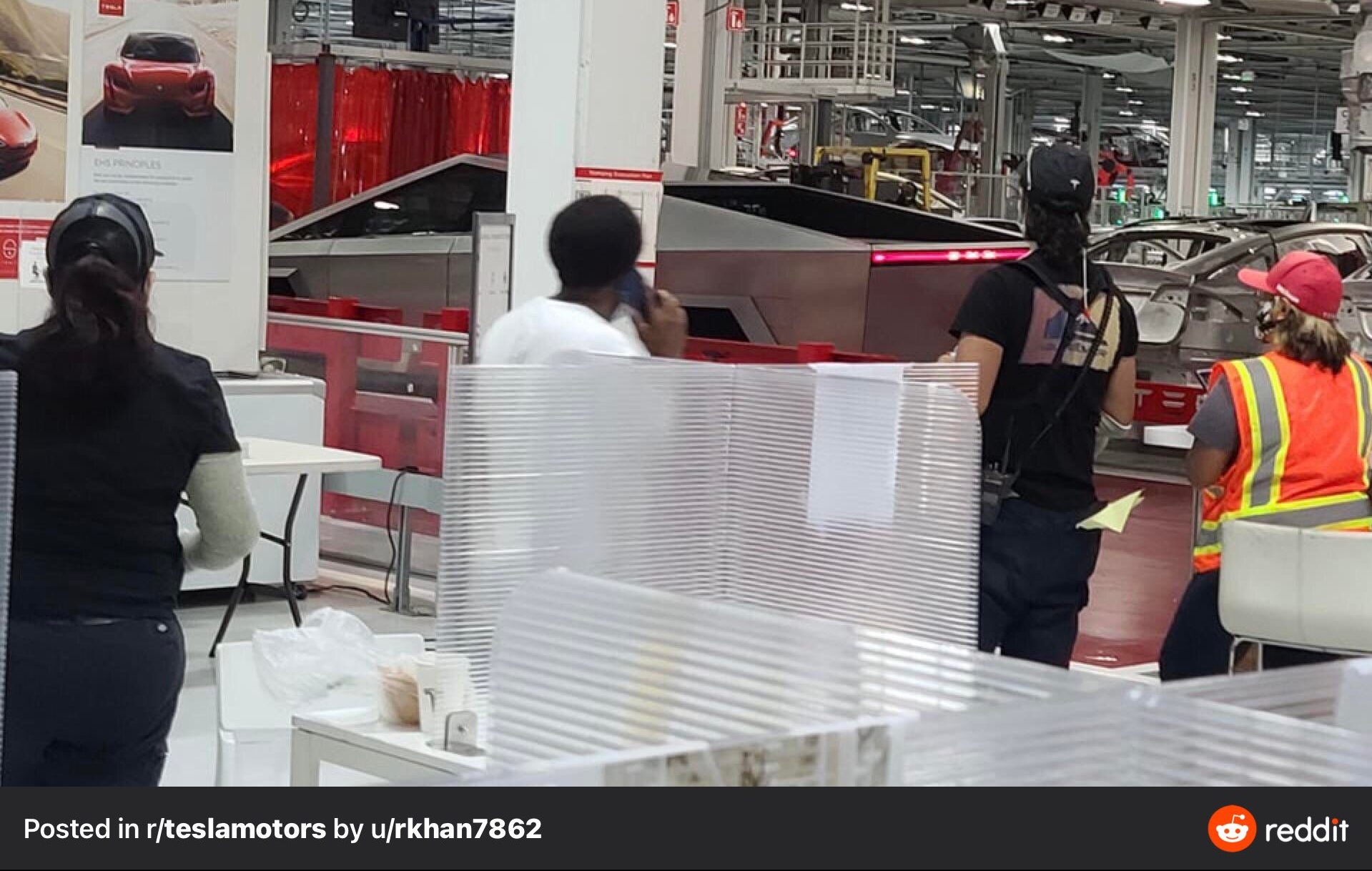 A Tesla Cybertruck prototype was spotted on production lines at the company’s Fremont factory in Northern California. The Cybertruck is not expected to be produced until late 2021, but Tesla has several prototypes floating around, and it may be adding to the list.

Fremont is the only currently-operating manufacturing facility that Tesla has in the United States as Giga Texas currently is under construction. Interestingly, the Cybertruck is not supposed to be built at the Fremont plant because company plans have indicated that Tesla will make the pickup at the Texas factory next year.

However, a post on the r/TeslaMotors subreddit from user u/rkhan7862 showed the Cybertruck near bare chassis in the Fremont plant. Other cars are visibly being manufactured in the same vicinity as the Cybertruck, so it is possible that Tesla was building an additional prototype for unknown reasons.

In the photograph, four workers are also admiring the company’s first attempt at a pickup truck as it could have been the very first time they had seen the interestingly-designed Cybertruck.

Tesla unveiled the Cybertruck in November 2019 at an event in Hawthorne, California. Since the event, the truck has been spotted several times in public. Once when CEO Elon Musk took it to a Los Angeles restaurant with friends and another when Musk and former late-night TV show host Jay Leno were filming a bit for MSNBC’s “Jay Leno’s Garage.”

The Cybertruck also appeared at the Petersen Automotive Museum earlier this year after Tesla delivered the truck for a week-long appearance at the historic establishment.

The production of the Cybertruck is scheduled for late next year, and, interestingly, Tesla would take the time to manufacture another prototype if that is what is going on in the picture. The end of Q3 is quickly approaching. Tesla has historically used the final two weeks of a quarter to focus on producing and delivering as many vehicles as possible in preparation for the subsequent Earnings Call.

While it is possible that this could be one of the already existing prototypes of the Cybertruck that Tesla produced in the past, it would be interesting to know why the vehicle is sitting this close to production lines. Typically, production lines at automotive facilities are tight and not very spacious, so to park a prototype, especially of the Cybertruck’s size, this close to other cars that are being built, would not make much sense.

Tesla will begin producing the Dual and Tri-Motor variants of the Cybertruck at Giga, Texas, in late 2021. The Single Motor variant will be available sometime in 2022.