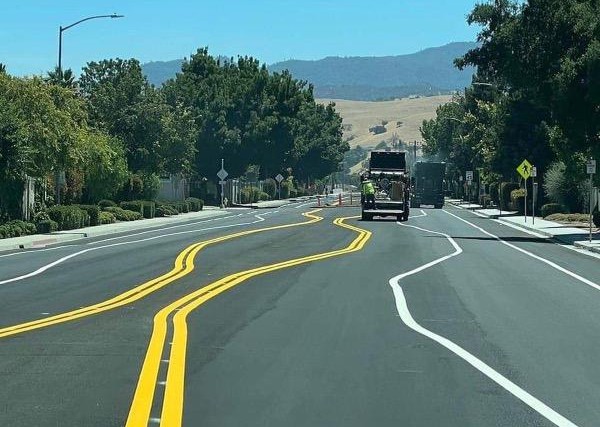 Yup, that road is definitely real, crooked and “drunk” lane lines and all. Images of the strangely-painted road at Hollister, CA were shared extensively a few days ago, to much humor and mockery from online users on platforms such as Reddit. It was then only a matter of time before a Tesla FSD Beta user decided to test the advanced driver assist system in the area.

As per a report from KKTV, the street in question at Hollister, CA was the result of a mistake by a contractor who incorrectly drew the lane lines on the road. The city had redesigned the road to add bike lanes and central circles, so the contractor was tasked to add lines that correspond to obstructions that are designed to slow traffic.

The city had intended the lane lines to be slightly curved in some areas, but reportedly due to the contractor’s error, the lane lines ended up as a zig-zag mess instead. The road will be repainted this week so that its lane lines will be up to code, but over the weekend, at least, it was open to motorists. This was where FSD Beta showcased some impressive behaviors.

When images of the “drunk” lane lines in Hollister, CA were shared online, some commenters noted that it would be an interesting area to test Tesla’s FSD Beta software. Needless to say, this was exactly what happened, with an FSD Beta tester sharing a video on the r/TeslaMotors subreddit featuring the advanced driver-assist system navigating the crooked lines.

Interestingly enough, Tesla’s FSD Beta actually managed to navigate the area pretty well, “drunk” lane lines and all. The advanced driver-assist system kept a consistent speed, allowing the Tesla to maintain a safe and comfortable pace overall. Tesla’s FSD Beta navigated the area just like it did any other road — it stayed within its lane, even if the lanes themselves didn’t make sense.

It should be noted that FSD is poised to receive a number of key improvements in its next few updates. Tesla appears to have started its internal rollout of FSD Beta 10.13 last week, which Elon Musk noted would be more capable of handling complex left turns. Upcoming versions of FSD Beta, such as v11, are expected to be even more extensive, as they would reportedly use a single stack for both city streets and highway driving.