Tesla has revised the delivery time frame for the Model 3 from 3-5 weeks to 2-4 weeks, indicating the company is ready to perform its regular End of Quarter push. After Tesla stock has underperformed through the first three months of the year, the automaker will be looking to outperform Wall Street and internal estimates, looking to boost its performance in the stock market.

The change occurred late on Monday evening, as Tesla revised its delivery time frame for the Model 3, its most popular vehicle, from 3-5 weeks to 2-4 weeks. This would indicate that Tesla is looking to push all systems to go in an attempt to pad delivery figures after reaching its 2020 full-year guidance. Tesla managed to deliver 499,550 cars in 2020, marking the year as a win for the company as it not only managed to expand greatly in the year of the COVID-19 pandemic, but it also experienced an over 700% increase in stock price during the year.

The company’s design studio for the Model 3 shows a newly revised timeframe. 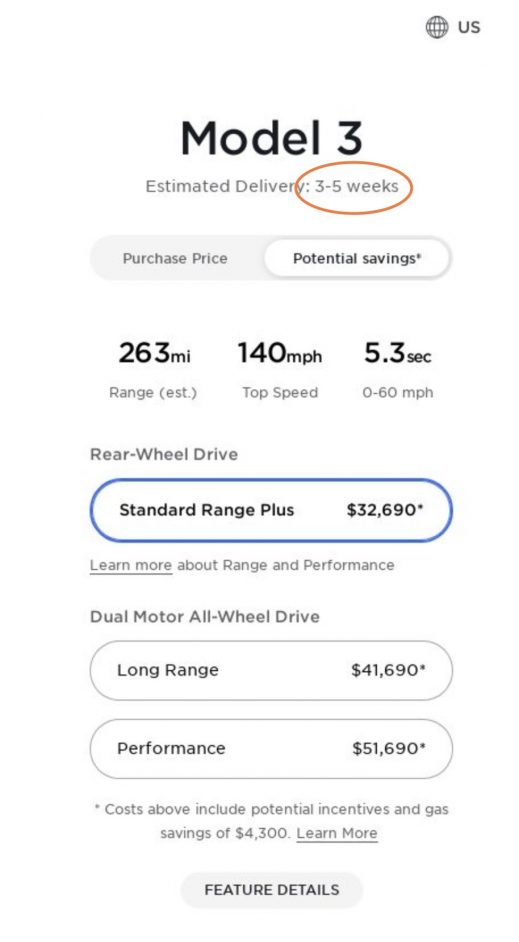 Tesla has a knack for performing accelerated and enhanced production and delivery pushes at the end of a quarter. During the final month of any quarter, Tesla employees are called upon to work as hard as possible to assist the automaker in outperforming itself compared to the previous three-month span. With demand continuing to increase globally, Tesla has the consumer base to sustain its expansion as a company. Its products are becoming more affordable, and its reputation as the best electric car company on the market has complemented its reduced prices and shorter delivery timeframes.

Coming off of its best performance as a company in Q4 with over 180,000 deliveries, Tesla will undoubtedly have its work cut out for it in Q1 2021. As Giga Shanghai began deliveries of the Model Y crossover in China in January, and Tesla revamped its flagship Model S and Model X vehicles, a sense of revitalization enters the automaker’s forecast for the future. Moving into the second quarter of 2021, Tesla could begin producing vehicles at its European production plant, Giga Berlin, within the coming months, which would only enhance the company’s footprint in the EV-concentrated European market.

Tesla is taking the necessary steps to increase production and enhance its ability to reduce delivery timeframes. With another U.S.-based production facility on the way and an expansion of its Fremont Factory in Northern California underway, there is plenty of evidence to suggest that Tesla is preparing for another year of massive growth. In 2020, Tesla increased deliveries by 36% compared to 2019. With two new production facilities and new vehicles on the way this year, growth continues to be the main focus of the world’s leading electric car company.

What do you think? Let us know in the comments below, Tweet me or e-mail me.