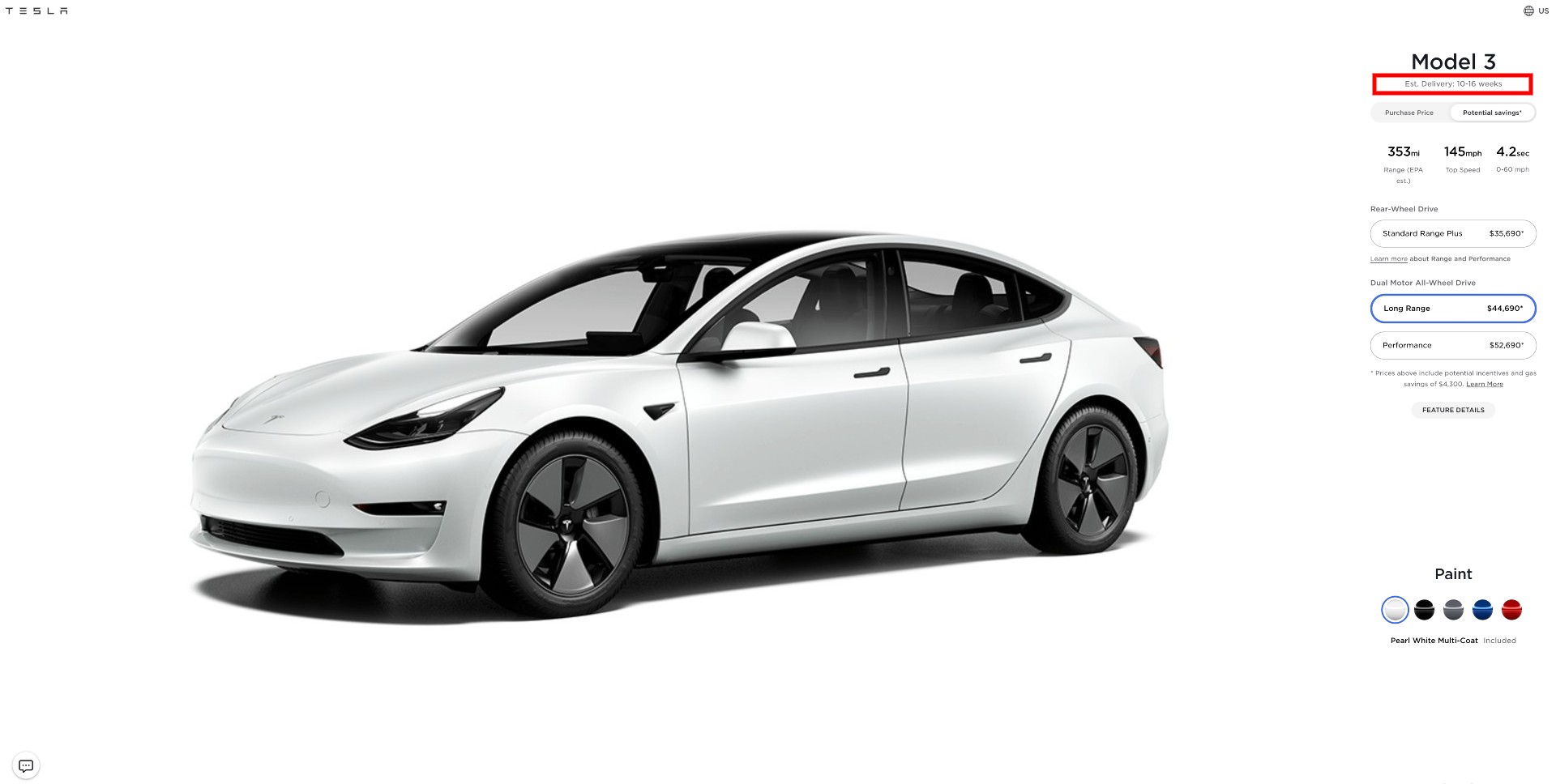 Tesla Model 3 deliveries pushed back in U.S. due to high demand

Are you looking to order a Tesla Model 3 soon? You might be waiting a while for it to show up at your local Showroom to accept delivery if you are in the United States. According to Tesla’s online Design Studio, demand for the all-electric sedan’s Long Range All-Wheel-Drive variant continues to skyrocket, and new order delivery dates are being prolonged to dates as late as November. Currently, expected delivery is slated at between 10-16 weeks for the Model 3 configuration. Demand for the vehicle is still rising, just in time for the company to open a new production plant in Texas that will assist consumers’ ever-growing want for the car.

Tesla’s all-electric vehicles, especially its mass-market Model 3 and Model Y, have been among the most popular EVs globally. In mid-June, we reported that the Long Range Model Y was nearly sold out for Q3 as estimated delivery dates had extended to the final month of the quarter. The demand for the Model 3 has evidently surpassed that of its automotive sibling, with delivery dates for the Model 3 extending into mid-November.

Tesla’s Design Studio for the Model 3 Long Range has extended the estimated delivery time frame to 10-16 weeks, meaning the earliest scheduled delivery for new orders would be the final week of September. The latest would be the second week of November.

The Model 3 has been Tesla’s best-seller globally for some time, only eclipsed by the Model Y in some regions like Tesla’s home state of California. However, the Model 3’s affordable price points combined with industry-leading software and range ratings make it an ideal choice for consumers, especially if it’s their first time buying an electric car. Outside of the United States, the Model 3 has remained a dominator of many EV-heavy markets, including Norway, Ireland, and Japan. The Model 3 has cemented itself as a Top 3 vehicle in China, sparring for the top spot with the Wuling HongGuang Mini EV for nearly a year straight.

Tesla has continued to grow its production and delivery figures quarterly. On July 2nd, Tesla reported it had produced 206,421 cars in Q2, with 201,250 vehicles being delivered. This was an increase from Q1, where the automaker reported 180,338 vehicles produced, with 184,800 deliveries. Both quarters were overwhelmingly dominated by the Model 3 and Model Y.

The Model 3 is manufactured at Tesla’s Fremont Factory in Northern California currently. Within the coming months, it will also be produced at Tesla’s Giga Texas facility near Austin. The Texas plant will produce Model 3s for customers in the Eastern half of North America, while the Fremont plant will continue its production for the Western portion of the continent.

It is interesting to note that the Model 3 Long Range is not the least expensive variant of the all-electric sedan. However, this has not stopped the car from having the most prolonged delivery date. The vehicle has 353 miles of range and a lightning-quick 4.2-second 0-60 MPH time. The car offers sufficient range with incredible performance, making it an ideal combination for consumers who want a little taste of both.

As demand for the Model 3 and Tesla’s other vehicles continues to grow, the company continues to expand its footprint of factories to handle the increasing demand for its cars. While Tesla is currently building its vehicles in Fremont and China at Giga Shanghai, Tesla will open the Giga Texas plant and its first European factory, Giga Berlin, later this year.

Tesla Model 3 deliveries pushed back in U.S. due to high demand