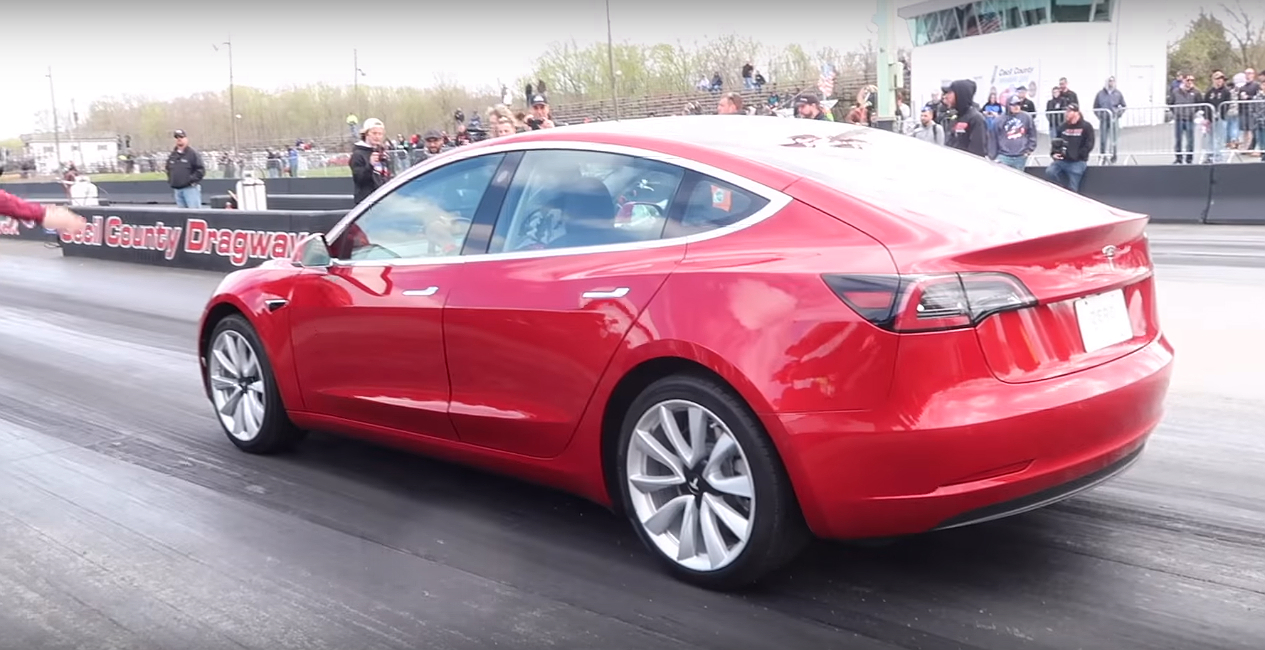 The record-setting Model 3 was driven by the host of YouTube’s JR Garage channel, who participated in the Street Speed 717 YouTuber callout event. Several popular auto YouTubers with Teslas were in attendance, including Brooks of DragTimes and Parker from Vehicle Virgins. As could be seen in JR Garage’s upload, however, the drag strip might have been filled with supercars left and right, but the Tesla Model 3 still attracted a lot of attention from onlookers.

The Model 3 driven by JR Garage was completely stock. According to the YouTuber, he was really just hoping that the Model 3 would break 100 mph. Much to his pleasant surprise, however, the compact electric sedan exceeded his expectations, finishing the quarter-mile in 13.338 seconds at 104.48 mph. Not long after that, the YouTube host was informed that his car had just beaten the Model 3’s quarter-mile record.

A second run was conducted soon after, with even better results. This time around, the Model 3 finished the quarter-mile in 13.330 seconds while traveling at 104.07 mph. Thus, within two quarter-mile runs, JR Garage’s electric car managed to set the Model 3 record not once, but twice.

Considering the time it took the Model 3 to finish its runs, the YouTuber noted that the 0-60 time of the electric car would have to be somewhere in the mid-4-second range. This estimate is in line with the observations of DragTimes, who previously conducted an informal test of the Model 3’s acceleration. During DragTimes’ test, the Model 3 was able to hit 60 mph in 4.6 seconds, .50 seconds faster than the 5.1 seconds listed by Tesla.

The Tesla Model 3 might not be Tesla’s quickest car, but the compact electric sedan is steadily becoming a favorite among driving enthusiasts. Just recently, we reported on a Model 3 being driven on an Autocross course. During its run, the driver of the electric car noted that the Model 3 handled perfectly, taking the twists and turns of the Autocross track without any problems. The driver of the Model 3 even compared the electric car with the Subaru BRZ — an ICE car popular for its cornering prowess.

Earlier this year, a Model 3 also took on the challenge of finishing a number of laps around the Laguna Seca Raceway. During that racing session, the driver of the Model 3 was able to finish all nine laps around the course without the car throttling its power.

Watch JR Garage‘s two record-setting quarter-mile runs with the Model 3 in the video below.