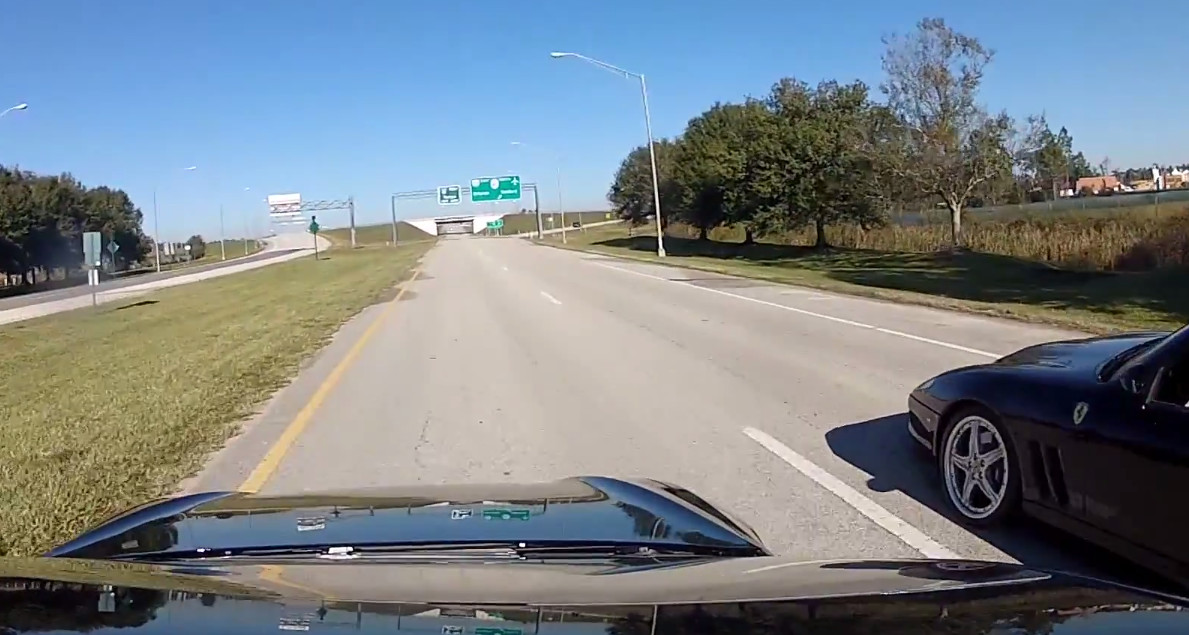 “What you got in there?” is heard from the Ferrari in the next lane over. Looking over is the driver of a Ferrari 575 Maranello unaware that he has just pulled up to a rare sighting of one of the first Tesla Model S P85Ds to hit American soil. “691hp” says Allen Wong, a young entrepreneur in his 20’s who made his fortune through a series of successful iOS apps.

Allen, who incidentally drives a Lamborghini Aventador as his other daily driver, has just agreed to an impromptu test of acceleration with the neighboring 12 cylinder Ferrari. “Yo yo, go!” is heard as the ubiquitous vocal cue to signal  for a drag race.

Not to much surprise, the 691HP dual-motor Tesla Model S P85D raged with as much ferocity off the line as any Tesla does. It’s Ozzy Osbourne ripping the head off of a live bat. The P85D has just made minced horse meat out of the legendary brand.

Allen describes the acceleration of the P85D as “the border between fun and frightening”. According to Allen’s Facebook page,

I got a chance to drag race a 691-hp Tesla Model S P85D against a Ferrari and a Lamborghini today, and this is what it felt like…

First impressions: The acceleration is ridiculous. I daily drive an Aventador, and I thought I got used to fast accelerations. But no, the Tesla Model S P85D hauled some serious ass. As a passenger, you do not get a chance to get ready for it at all. My internal organs were glued to the back of my body. I’ve done the P85+ test drive before, and it was already pretty fast. But this P85D is on a whole other level.

We pitted the car’s acceleration against other cars. It pretty much beat everything at the car show (Ferraris and R8s didn’t stand a chance). So I had to pit it against my Aventador, which does 0-60 in 2.8-2.9 seconds. Tesla P85D does it in 3.1-3.2 seconds. Right off the bat, the Tesla got ahead. It gets a good maybe half a car length ahead before the Aventador grips fully and starts hauling. So we decided to make it fairer and only accelerate the Tesla when the Aventador grips and starts moving. That’s when we truly got both cars to start moving at roughly the same time.

Drag Race Results (Note: This was completely casual and not in anyway in ideal, scientific conditions – the Aventador was not doing launch control): The Tesla pulled ahead in the beginning by about the hood length. But Tesla never got a chance to pull away. Instead, the Aventador kept up and was slowly cutting the difference between them with each gear shift. By the 50-60 mph, the Aventador caught up. By the 85 mph mark, the Aventador was half a car length ahead and the Tesla was only at 70-75 mph. So from around 0-60, the Aventador and Tesla P85D were pretty much neck and neck. But from 0-30 or so… the Tesla beat the Aventador. This gives you a general idea of how ridiculously fast the P85D is at the jump.

More observation: It feels different as a driver. Since I can anticipate the acceleration, I don’t get the same scare/thrill that I get as a passenger. It’s to a point where I actually enjoyed being a passenger rather than a driver. But after about a dozen of those 0-60 accelerations, I felt like I had to puke – probably the first time I felt this way in many years. It was a different feeling than what I got from an internal combustion engine car, because when you hear the engine roar, you can kind of anticipate the acceleration that comes after it. But since the Tesla is silent, there’s no warning. I think I almost got a concussion from my head suddenly banging into the headrest because of how little anticipation the car gives you. At one point I was in mid-sentence when my driver floored it, and I had trouble getting the words out of my mouth. It really takes your breath away (literally). The acceleration is at the border between fun and frightening.