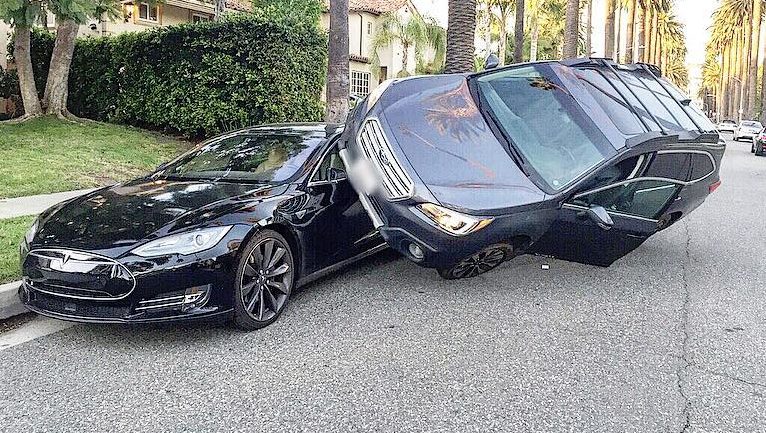 It is no secret that Teslas are among the safest vehicles on the road today. Being constructed from a hybrid of aluminum and ultra-high strength steel, Tesla’s electric cars can take a beating. Thanks to their all-electric design, the vehicles also feature generous crush zones to protect its passengers in the event of an accident. Sometimes, though, Teslas get involved in traffic incidents that are so unusual, they have to be seen to be believed.

Take this particular accident shared by the Beverly Hills Police Department on their Instagram account, for example. Before 2018 ended, the BHPD uploaded an image that pretty much looked almost like it was photoshopped. The image featured the aftermath of an incident involving a Subaru SUV crashing into a parked Tesla Model S. According to the BHPD, they were informed that the driver of the Subaru swerved to avoid an animal on the road, which caused the SUV to skid and almost roll over. Unfortunately for the Tesla, it was parked on the path of the SUV.

But how you ask? Great question! The driver of the Subaru “swerved to avoid a fox or a dog.” Oh by the way, the Tesla window did not even break. ?????? #accident #crash #real #truestory #hollywood #stunt #driving #fox #dog #beverlyhills #police #cops #subaru #tesla #thinblueline #lawenforcement #elonmusk #suv #lucky #oneinamillion

The Beverly Hills Police Department noted that fortunately, the strange accident did not result in any injuries. Thus, while the aftermath of the incident teases what could very well have been a frightening scene (particularly for the driver of the Subaru), the BHPD stated that they only assisted with the exchange of information for the parties involved.

Perhaps most notable about the accident, though, was the state of the Tesla Model S after the SUV practically mounted it. The Subaru’s right front wheel landed on the all-electric sedan’s rear window, but despite this, none of the Model S’ glass components broke. The BHPD deemed the accident so remarkable; they dubbed it as “one in a million.” Due to the lack of damage on the electric car, numerous users on the social media platform also praised the Model S for its toughness. It takes a pretty durable car, after all, to survive such an accident without even a broken window.

Tesla’s electric cars are no stranger to weird accidents. Back in September, a Tesla Model X traveling at West Houston became the victim of a falling airplane. During the incident, an aircraft owned by the Drug Enforcement Agency was forced to make an emergency landing, causing it to land on the road. As it was landing, the airplane clipped the Model X, ripping off a part of the all-electric SUV’s front end. Due to the vehicle’s toughness, the occupants of the Model X were virtually unscathed.

Tesla, for its part, has been engaging in a consistent effort to ensure that its vehicles are among the safest cars on the road today. So far, the company has been succeeding, with safety features such as a built-in dashcam being rolled out through a free over-the-air software update. The Model 3, Tesla’s latest and most ambitious vehicle to date, has also been granted a flawless 5-Star Safety Rating across all categories and categories by the National Highway Traffic Safety Administration (NHTSA). The Model 3’s headlights even received the approval of the Insurance Institute for Highway Safety (IIHS), a group which uses incredibly strict metrics to evaluate the safety of vehicles’ lights.