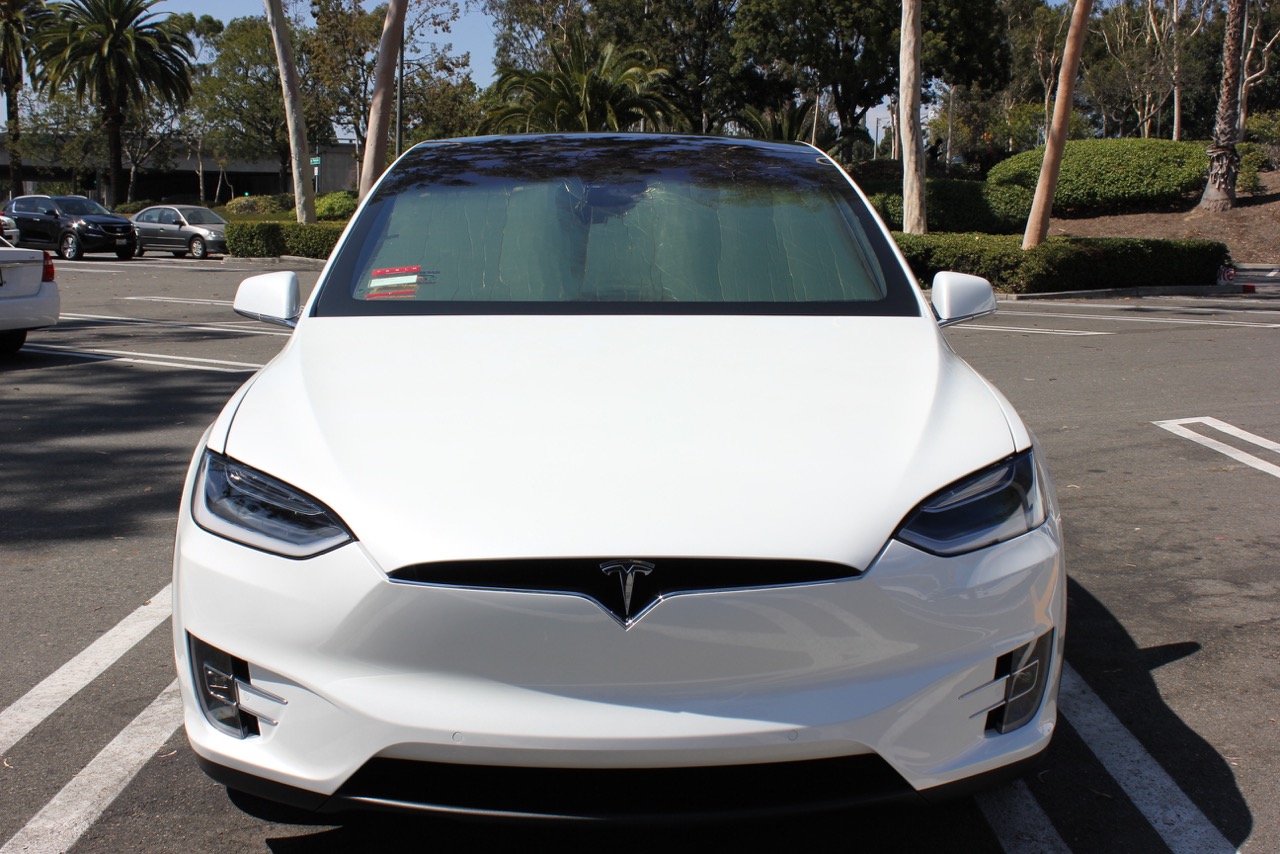 Tesla’s Model X boasts an enormous all-glass panoramic windshield that arches from the base of the front windshield to beyond the front seats making for an airy and spacious cabin feel, but with the dramatic effect of an IMAX experience. However, being able to keep the car cool while parked under the sun is quite the challenge, and that couldn’t be more the case here in sunny Southern California

Sure, there’s the Tesla smartphone app which allows you to remotely initiate climate control settings and “pre-cool” the vehicle before entering, but it often takes a good amount of time and energy (literally) to cool the interior temperature down by a few notches.

Enter HeatShield Gold Series Sunshade, custom made specifically for the Tesla Model X and designed to reflect heat and sunlight away from the glass. The manufacturer has created a shade that can be attached by using suction cups to every glass surface of the vehicle. With all of the sunshades installed properly, the Model X interior has a dark blackout effect akin to what you might find inside a home movie theater. The only visible light available is the one that peers through between the outer perimeter of each sunshade and the glass it’s mounted to. The sturdy corrugated box used in shipping the HeatShield ensured that parts arrived without damage. Instructions on how to use the Model X Gold Series HeatShield were printed onto stickers that adhered to the sunshade itself.  Just like the previous generation Silver Series edition HeatShield which we had a chance to review on a Model S, it takes little know-how to be able to install the Model X Gold Series sunshade. However I was a bit disappointed to learn that this time around there was no cloth storage bag included as part of the Gold Series set. Apparently cloth storage bags for each sunshade were included with the Silver Series HeatShield for Model S so I was expecting them this time as well. I would have used the bags to store HeatShields that were not in use as I couldn’t see myself needing to use every single piece on all occasions.

Total time of install: It took less than 10 minutes to install all 11 individual pieces. 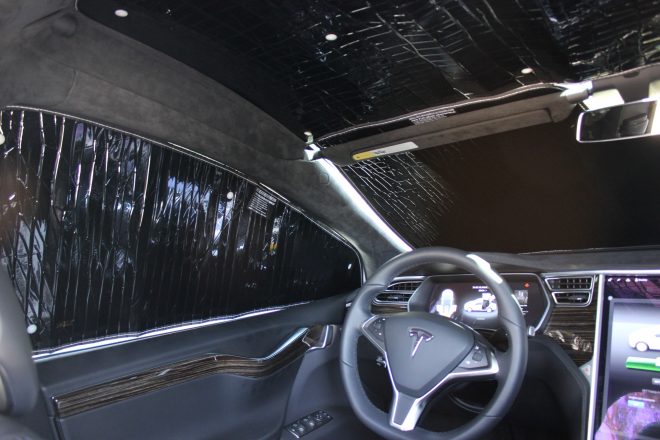 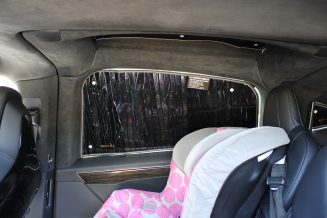 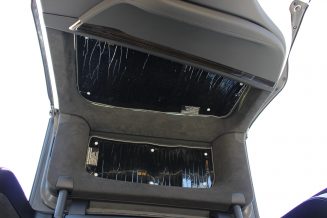 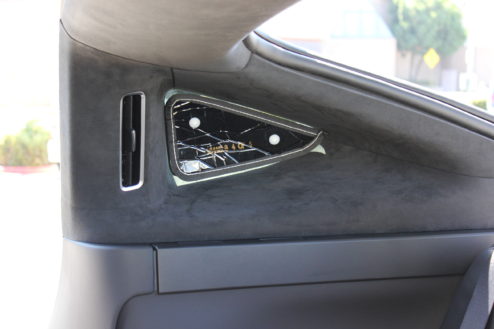 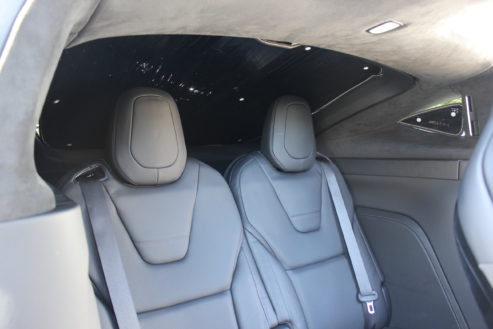 Fit and coverage is fantastic. The HeatShield tucks into all crevices along each window making for a snug fit. I was delighted to find that there was sufficient space for the rear view mirror and the BlackVue dashcam I have mounted directly behind it. I also noticed that the suction cups were strategically positioned on each sunshade to not only be effective in securing it to glass but was balanced in weight. Putting it to the temperature test

With the help of a digital laser thermometer and the Tesla iOS app, I measured the interior temperatures on three occasions as follows:

Test 1 – Starting point with no HeatShield

The Tesla app showed an initial interior temperature of 84 degrees Fahrenheit (29 C). I parked the Model X in the sun and installed the set of HeatShields to began the test. After leaving the car in direct sun for 60 minutes, the interior cabin temperature rose by 8 degrees Fahrenheit to 92 F (33C) according to the Tesla app. However pointing the digital laser thermometer to a hot surface showed the temperature to be fairly on par at 95.9 F.

Now, let’s see what happens when no HeatShield is installed. Test 3 – 60 minutes with NO HeatShield sunshade

Having cooled the vehicle to the same starting point, I tested the impact on temperature if no HeatShield sunshade was installed. The results were dramatic. HeatShield did the job and kept Model X cool from the drought stricken power of the sun. Unlike traditional vehicles, the huge windshield and port windows above the middle row passenger seats gives way to a lot of surface area for the heat and sunlight to penetrate. In this test, there was a 21° differential with and without the HeatShield according to the reading on the Tesla iOS app.

I’d like to state that the manufacturer clearly indicates to only use HeatShield in a parked car, however, I decided to test a portion of the HeatShield while embarking on a roadtrip between Los Angeles to San Diego and back. While I love driving with a completely unobstructed view and enjoy the helicopter cockpit-like experience that is unparalleled with any SUV in the market, I used the HeatShield 3-piece sunroof set to get some relief from the sun.

It’s no fun for me nor my passengers when the sun is beating down on you for hours on end while stuck in holiday LA traffic. So I decided to cover just the sunroof and port windows with HeatShield. I figured this could alleviate Model X from working so hard with keeping the interior cabin temperature comfortable and subsequently use less battery to keep the interior cool.

The HeatShield blocked all of the light and UV rays from entering the cabin and it did so without affecting my view of the road or surroundings while driving.  Surprisingly, after driving 200 miles, the HeatShield sunroof piece did not budge and was secure to the windshield by the 10 fixed suction cups. For good measure, I also used the magnetic sun visor to keep it locked in place. It didn’t move one bit.

It may look a bit unsightly from the inside but if you look from the outside of the car, you wouldn’t have even noticed anything was there. Rest assure the look of the Model X from the outside is still spectacular. When not in use, the HeatShield sunshades roll up and have attached velcro straps to keep them in place. They can be stored under the seats or in the lower compartment behind the 3rd row.

As much as I tried to find flaws with the HeatShield for Model X in order to “balance out” the review with some good and bad, I honestly couldn’t find anything wrong with the quality of the sunshades or the installation itself.  They are made of high quality, sturdy, and reflective materials that apparently have excellent insulating properties. The fitment of the sunshades on the obscure Model X window shapes are a perfect match.

More importantly the HeatShield sunshades kept my Model X interior significantly cooler and without having to use power to do so. It’s a welcome addition to our family’s Model X. We’ve been using the HeatShield on a daily basis and intend to do so throughout this hot summer.