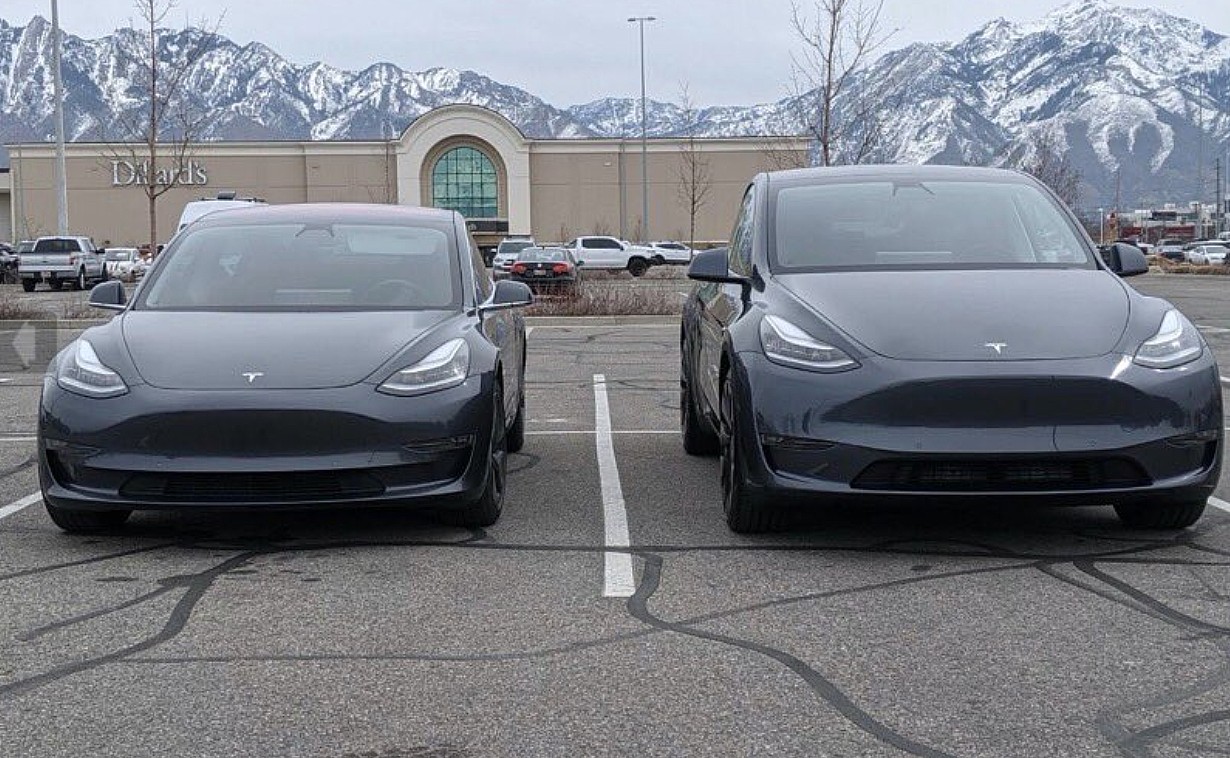 Tesla Model Y vs. Model 3: What are the key differences?

The Tesla Model Y and Model 3 are both designed to cater to the mass market. Both vehicles share 75% of their parts since they’re optimized for quick production. But even vehicles that are three-quarters similar have key differences, some of which were revealed in the recently-released Tesla Model Y Owner’s Manual.

From their tow eye hooks to their speakers to their wheel configuration, the Model Y and Model 3 feature subtle differences that make them distinct from each other. Here are 12 of these key differences, as outlined by Tesla owner-enthusiast Tesla Raj in a recent video.

We’ve highlighted some of the key differentiators below.

Tesla has added a second tow eye hook to the back of the Model Y for added convenience when towing the vehicle from either end.

In times when a Tesla Model Y may need to be transported on a flatbed truck, the vehicle can be placed in Transport Mode and winched by way of a tow eye hook and onto the back of a flatbed truck while its wheels remain free-rolling.

Compared to the Tesla Model 3, which is equipped with a tow eye hook only in the front of the vehicle, Model Y has a cover on the right side of the rear bumper to conceal the second tow eye. This can be seen in the vehicle’s diagram in the Model Y Owner’s Manual. 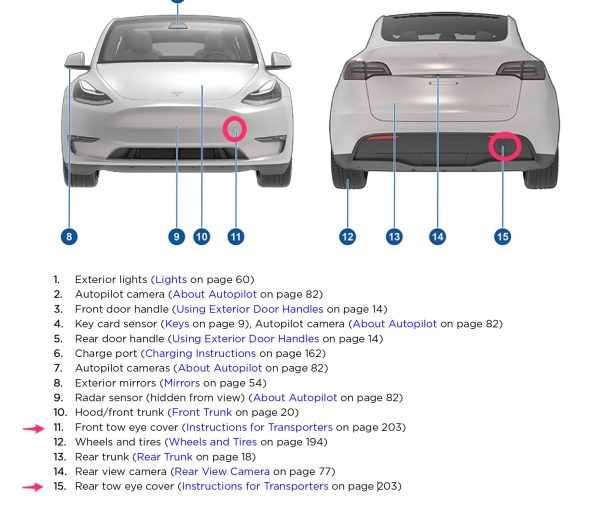 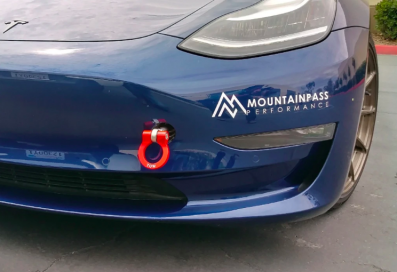 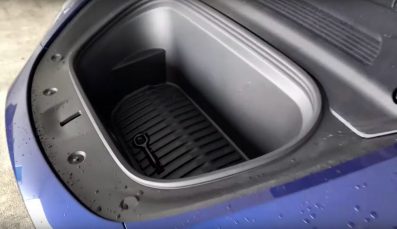 Emergency release handles are only required in situations where the vehicle does not have power. “In the unlikely situation that Model Y has no power, these electrically-powered buttons at the top of the door handles no longer work. However, the doors are equipped with mechanical releases so that you can still open them,” notes Tesla in its Model Y Owner’s Manual. 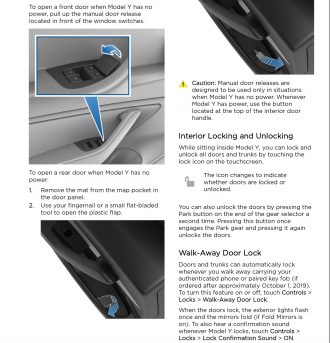 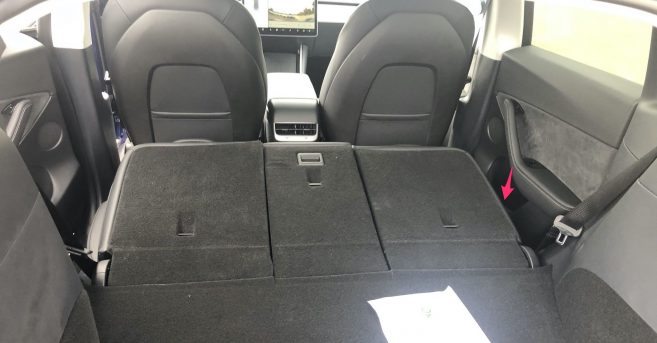 No surprises, but the trunk space for Model Y is drastically larger than that of the Model 3. Factoring in Model Y’s taller hatchback design versus Model 3’s traditional trunk and the difference in cargo space becomes obvious. Model Y boasts a massive 68 cubic feet of cargo volume compared to 15 cubic feet for Model 3.

The rear seats of the Model 3 and Model Y are also quite different in the way that the all-electric sedan’s fold 60/40. Model Y, on the other hand, has three seats, all of which could be folded down individually. The Model 3’s rear seats can also be folded down only through the rear, while the Model Y provides two ways to fold down its second-row seats and includes a center passthrough when the middle seat is folded down.

Model Y has two switches on the left side of the trunk that gives owners ease of access to the second-row seats directly from the trunk. Activating the switch will fold-down each corresponding rear seat.

The Model Y seats appear to be the same design as the Model 3, however, are mounted on risers for better legroom and overall comfort than Model 3. Rear seat legroom in the Model Y is improved over Model 3 by roughly 15%, although it looks like some of it was borrowed from the 2% reduction in front legroom when compared to Model 3. The headroom between Model Y and Model 3 is relatively the same and differ only by 1-2%. 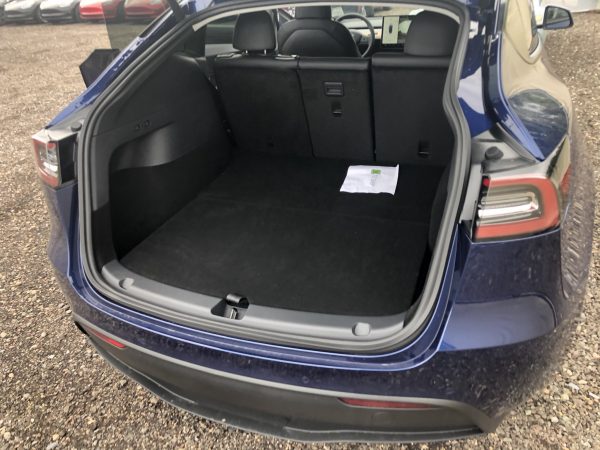 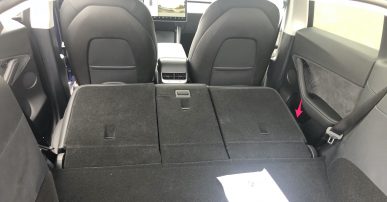 Arguably the most notable difference between the Model Y and Model 3 in terms of core design improvement is the wiring system and heat management.  Tesla added a heat pump to the Model Y, which could help the all-electric crossover maximize its range during winters. In addition and as pointed out by TeslaRaj in his video, the diagram for Model Y appears to show a single track for wiring as opposed to Model 3 which has two.

Teslarati will explore both of these points in detail in an upcoming story.

Both the Tesla Model 3 and the Model Y come with coat hangers, though the all-electric sedan’s is located on the crossbar that goes between the B pillars. The Model Y, with its seamless glass roof, has its coat hangers in the second row.

Tesla notes in the Model Y Owner’s Manual that the rear USB ports are for charging devices and do not communicate with the vehicle like the front USB ports that can be used for recording via TeslaCam.

The Model Y is equipped with a power liftgate, which provides owners an automatic and convenient way to open and close the vehicle’s rear hatch by way of the center touchscreen or Tesla mobile app. This feature is not present in the Model 3, which is one of the reasons why aftermarket power truck mods became quite popular in the Tesla community.

A big thanks to Tesla Raj for compiling this info. Check out this video below.

Tesla Model Y vs. Model 3: What are the key differences?