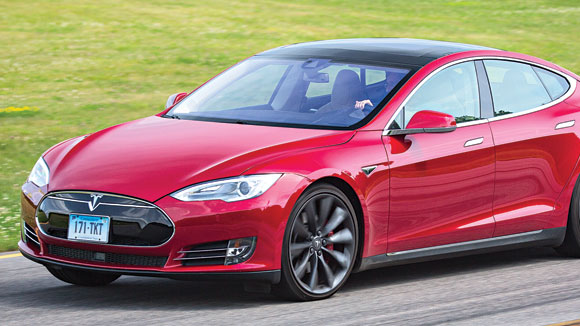 When Consumer Reports first tested the Model S, it gave it a near perfect score, something no other car had ever accomplished. Its latest review takes aim at the new dual-motor variant, the Tesla P85D – but it has a problem. The P85D received even higher scores for braking, handling and fuel economy than the previous generation, ending up with a total score of 103.

With a maximum 100-point scoring system in place, Consumer Reports had to revise how it scores all cars because of the exceedingly great performance of the P85D. The new scoring system put into place will not affect any scores awarded previously, but going forward, the P85D is the car against which all other cars will be judged.

Consumer Reports was at some pains to say the P85D was not a perfect car. “It has imperfections. The interior materials aren’t as opulent as other high-ticket automobiles, and its ride is firmer and louder than our base Model S. What’s more, a lengthy road trip in an electric car with a 200-plus mile range can be a logistical hurdle if a quick-charging station isn’t along your route. It’s also important to note that our Rating doesn’t include the Tesla’s reliability. The Model S has average reliability, according to our owner survey responses.”

Consumer Reports takes its car testing seriously. It has special machines that carefully prepare the surface of its test track so that the results it obtains are repeatable in the real world. It adjusts for variations in temperature and humidity. It makes sure that winds don’t disrupt the reliability of its results. It strives for objective, reliable results that have credibility with consumers and the press.

Despite saying the P85D is not perfect, it gave the car this accolade, “The Tesla Model S P85D is an automotive milepost. It’s a remarkable car that paves a new, unorthodox course, and it’s a powerful statement of American startup ingenuity.” It doesn’t get any better than that, no matter how you score the results.