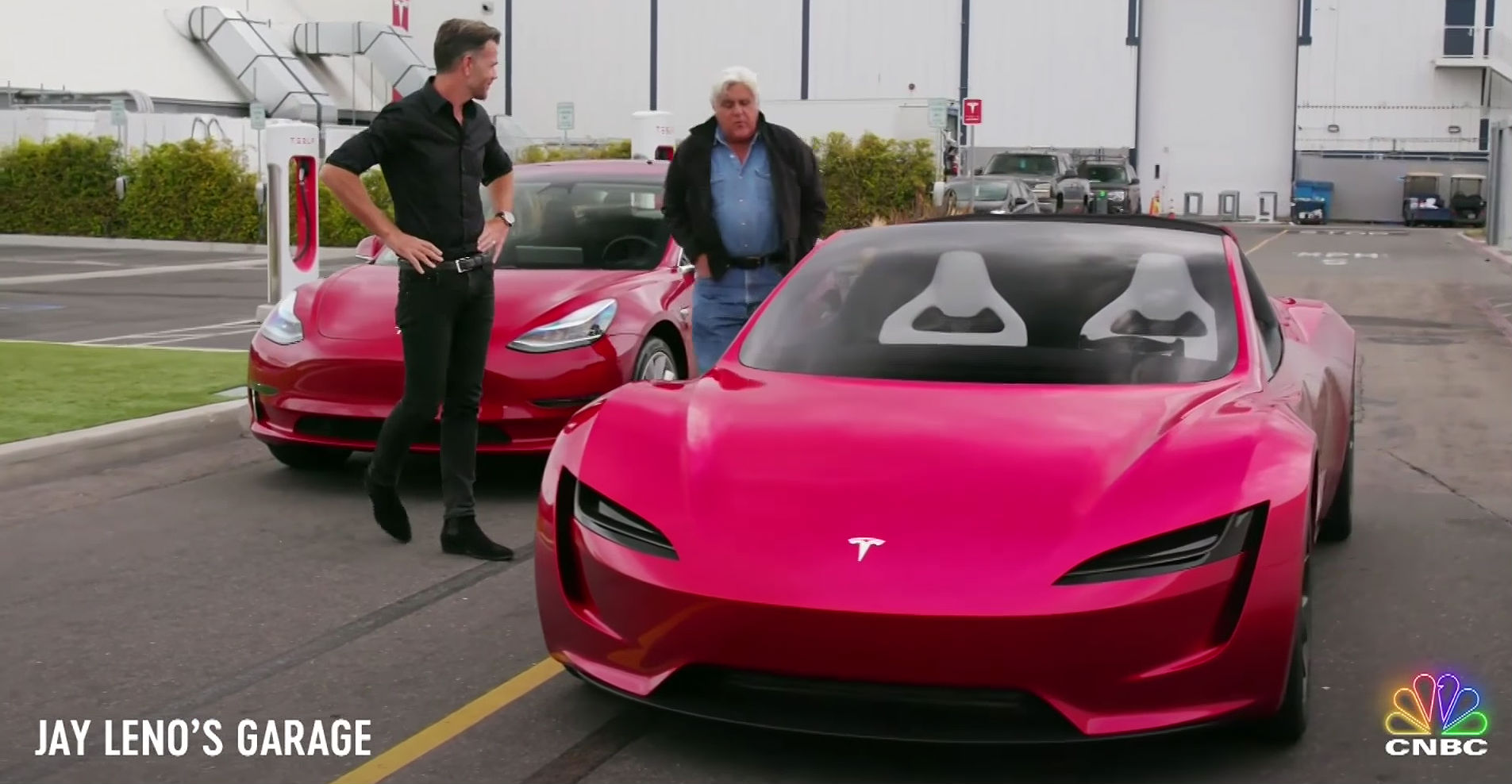 The next-generation Tesla Roadster is coming to Jay Leno’s Garage for this Thursday’s upcoming episode. A preview of the all-electric supercar’s segment was teased on CNBC this Friday, which featured the iconic talk show host talking about the next-gen Roadster with Tesla’s Chief Designer Franz von Holzhausen.

This would not be the first time that the veteran talk show host would feature a Tesla in his show. Leno also did a pretty extensive segment on the Tesla Model S back in 2012, where he discussed the design, performance, and features of the electric family sedan. Franz von Holzhausen also joined the veteran talk show host then, providing a background on the development and capabilities of the Model S.

The next-generation Roadster is Tesla’s upcoming halo car, a vehicle designed to showcase the ultimate capabilities of the company. Elon Musk shocked the automotive world with the specs of the supercar when it was unveiled last year, with its 0-60 mph time of 1.9 seconds, top speed of over 250 mph, 200 kWh battery, and range of 620 miles per charge. Inasmuch as these figures are nothing short of insane, Musk mentioned during the unveiling, and in subsequent tweets over the past few months, that these specs were actually true of the next-gen Roadster’s base model. Considering that there will also be a “SpaceX option package” for the vehicle, there is a very good chance that the specs Tesla announced last year for the all-electric supercar were actually conservative.

The next-gen Roadster is expected to start production sometime in 2020, but Elon Musk has already been dropping some hints about the vehicle’s capabilities every so often. A recent interview with noted YouTube tech reviewer Marques Brownlee, better known as MKBHD, saw Elon Musk discussing several aspects of the Roadster, including its lack of side mirrors, its space, and its range. Musk even addressed the company’s Track Mode, which is set to make a debut on the Model 3 Performance.

More details about the next-gen Tesla Roadster would most likely be revealed in the upcoming episode of Jay Leno’s Garage, particularly since the veteran talk show host has been largely supportive of Tesla over the years. Back in 2016, Leno noted in a segment on CNBC that Americans should be supportive of the California-based company.

“We live in a world now where every year, you lose about 5% of the new car companies. In the mid-teens, there were 350 car companies in the United States. Every year since then, two or three of them dropped out. I mean, just in my lifetime, we’ve lost Oldsmobile, we’ve lost Pontiac, we’ve lost Saturn. There’s a whole bunch that just disappeared.

“So here comes a brand new car company, so that’s impressive. It’s a tough business to get into; and the fact that Tesla is making a go of it and quite successfully, I think is impressive and should be applauded. We’re becoming like the British — we like noble failures. I would watch, listen to these radio talk shows just tear Tesla apart; and I go, ‘Here’s a guy, building an American car in America, using American labor. Why are you not rooting for it to be successful? Why do you wish it would fail?’ I don’t quite understand.”

Watch a preview of the next-gen Roadster’s segment in the upcoming episode of Jay Leno’s Garage in the video below.