Tesla CEO Elon Musk has revealed that the next-generation Roadster will have a “SpaceX option package” that will upgrade the all-electric supercar’s performance to even higher levels.

Speaking during Tesla’s 2018 Annual Shareholder Meeting, Musk addressed the room full of investors that range and performance of the Tesla Semi and Roadster prototypes that were unveiled last November will be even better in the final production version. “In particular, the Tesla Roadster. What we unveiled with the Roadster was the base model performance. It’s going to have a SpaceX options package. It’s crazy,” said Musk.

The announcement reinforces a previous statement made about the general specifications of the all-electric supercar. Following its debut, Musk tweeted that there would be a “special option package” that takes the vehicle to the “next level.” In a follow-up tweet, Musk candidly noted that with the special upgrade, the next-gen Roadster would be able to fly “short hops,” considering that applying rocket technology opens up new possibilities for the vehicle.

Not saying the next gen Roadster special upgrade package *will* definitely enable it to fly short hops, but maybe …

The specs of the next-gen Roadster with the SpaceX option package could very well be beyond hypercar territory. The base trim of the vehicle, after all, is already equipped with impressive features, such as a top speed of more than 250 mph, a 0-60 mph time of 1.9 seconds, a quarter-mile time of 8.9 seconds, a 200 kWh battery pack that gives 620 miles of range, and 10,000 Nm of torque from the supercar’s 3 electric motors.

The supercar is also equipped with “Plaid Mode,” Elon Musk’s latest nod to sci-fi comedy film Spaceballs that features even faster acceleration than the Model S P100D and Model X P100D’s Ludicrous Mode. With the SpaceX option, the next-generation Tesla Roadster would practically be an electric rocket on wheels — a vehicle that can, in Elon Musk’s words, truly deliver a “hardcore smackdown” to gasoline cars.

The next-gen Roadster carries much of the practicality that Tesla’s vehicles such as the Model S, Model X, and Model 3 are known for. Despite being a supercar, for example, the next-gen Roadster can seat four passengers, thanks to its 2+2 seating arrangement. Vehicles that feature comparable performance, such as the Koenigsegg Agera R and the Bugatti Chiron, and every vehicle in the hypercar trinity like the Porsche 918 Spyder, the Ferrari LaFerrari, and the McLaren P1, are exclusively 2-seaters. 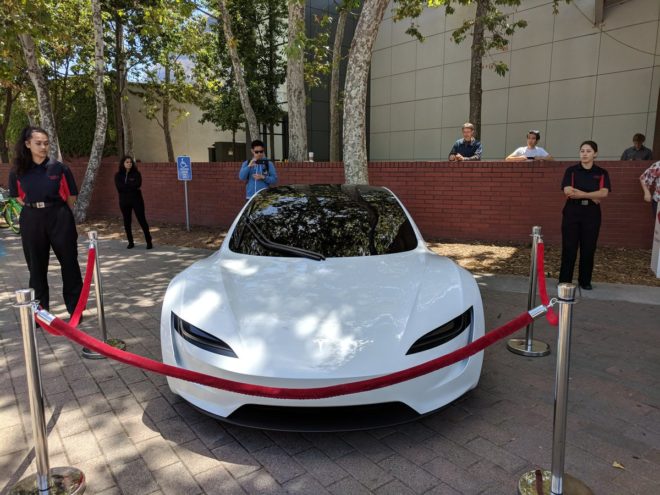 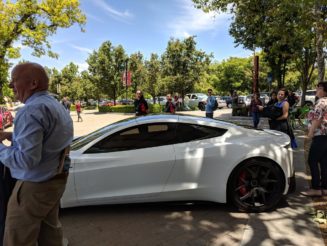 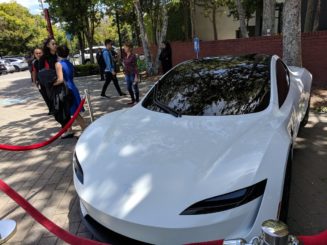 A white Tesla Roadster prototype is displayed outside of the Computer History Museum in Mountain View, CA on Tuesday, June 5, 2018 [Credit: Dennis Pascual via Twitter]

More importantly, the $200,000-$250,000 next-generation Roadster is also far more affordable than its gasoline-based competitors. The hypercar trinity, for one, are all in the $1 million price range. The Koenigsegg Agera R and the Bugatti Chiron, on the other hand, are even more expensive, with the former costing $2.1 million and the latter commanding a hefty $2.8 million price tag.

Tesla is starting to feature the next-generation Roadster more frequently on its social media channels and live events. During the company’s first-quarter all-hands promo video, the all-electric supercar’s blistering acceleration and its unique interior were highlighted prominently. Earlier this year, the vehicle was also displayed at Tesla’s Palo Alto headquarters.

Test drives of the next-gen Tesla Roadster are set to begin sometime towards the end of 2019. Production of the vehicle is expected to start in 2020.