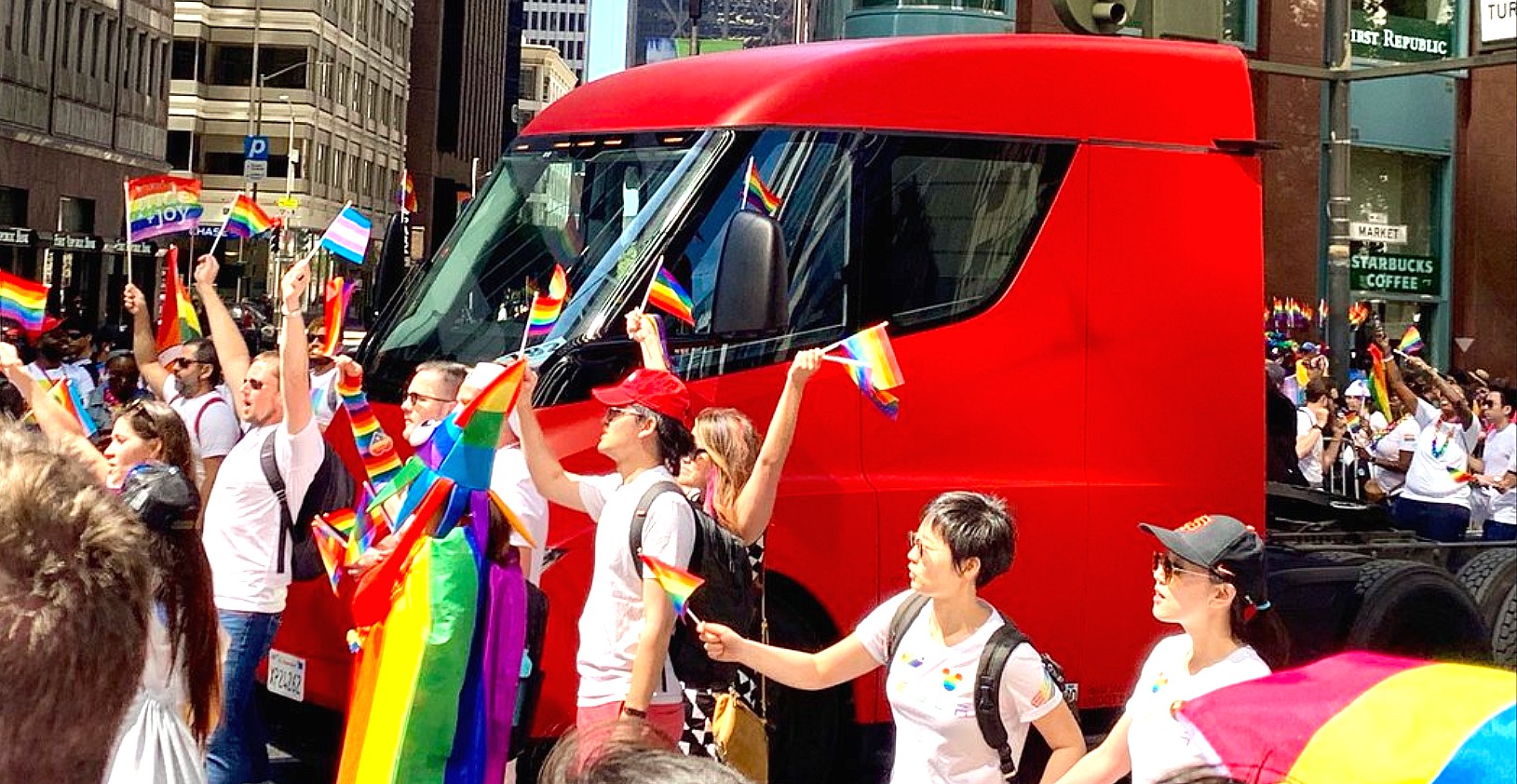 The Tesla Semi at the 2019 Pride Parade in San Francisco, CA. (Photo: SuaveLlave/Twitter)

Videos taken of the massive, red-wrapped all-electric truck reveal that the Semi carried a long banner on its back, which featured the iconic colors of the pride flag. The Semi, together with Tesla’s overall presence in the parade, appear to have been appreciated by those watching the festivities, as evidenced by the loud cheers for the electric car maker and its fleet of vehicles.

The Tesla Semi made an appearance at the recently held 2019 Pride Parade at San Francisco, CA. The all-electric long-hauler was placed up front, accompanying Tesla employees and leading the Model 3, Model S, and Model X, which the company also brought over to the event.

Apart from Tesla, several notable companies such as Google also made their presence known at San Francisco’s Pride Parade this Sunday. Interestingly, Google’s appearance had a shade of controversy, as some employees of the search giant showed up to protest the company’s stance on alleged hate speech present in platforms such as YouTube. Prior to the parade, Google was criticized by the LGBTQ community for allowing videos of conservative commentator Steven Crowder, who had constantly attacked Vox journalist Carlos Maza’s sexual orientation and ethnicity, to remain on the video streaming platform.

Upon review of Crowder’s content, YouTube noted that the commentator, while using hurtful language against the journalist, did not violate community guidelines on hate speech. Protesting YouTube’s decision, a group of Google employees then called on the Pride Parade organizers to drop the search giant’s sponsorship of the event. Google was ultimately still allowed to participate in the parade, on account of the company’s history of being a strong ally to LGBTQ communities.

Tesla, for its part, has developed a reputation for being one of the most inclusive companies in the market, ranking a perfect 100 score at the Human Rights Campaign (HRC) Foundation’s 2019 Corporate Equality Index (CEI) earlier this year. The HRC dubbed Tesla as one of the best companies for LGBTQ workers in the United States, thanks in part to policies such as equal health coverage for transgender individuals, equivalency in same and different-sex spousal medical and soft benefits, and policies that actively prohibit the discrimination of employees based on their gender orientation.

Tesla CEO Elon Musk is no different. Having made his stance clear on the LGBTQ conversation in the past, Musk has exhibited little patience for hate speech. This could be seen in an interaction with a Twitter user last year, who complained about Tesla’s pro-LGBTQ stance. In a quick response, Musk wrote “Don’t buy our car if that’s a problem. People should be free to live their lives where their heart takes them.”