Tesla’s all-electric Semi truck was spotted yet again, this time traveling at highway speeds on a major interstate that leads to the company’s Nevada-based Gigafactory. Vlad Fed took notice of the sleek Tesla Semi that happened to be traveling in the same direction as him near I-80’s Reed Avenue Exit, located close to IKEA’s West Sacramento outlet. As the truck passed beside Vlad’s car, several interesting aspects of the massive electric long-hauler could be seen.

For one, the long-range Tesla Semi appears to have a USDOT number of 2296288, which isn’t too far off from the registration number spotted on Tesla’s short-range matte black Tesla Semi that was spotted en route between the company’s Palo Alto headquarters and factory in Fremont.

Though not nearly as loud as the Tesla Semi that was seen performing a tire-shredding acceleration run on public streets, the unmistakable whine of the big rig’s four Model 3-derived electric motors can still be heard at highway speeds. 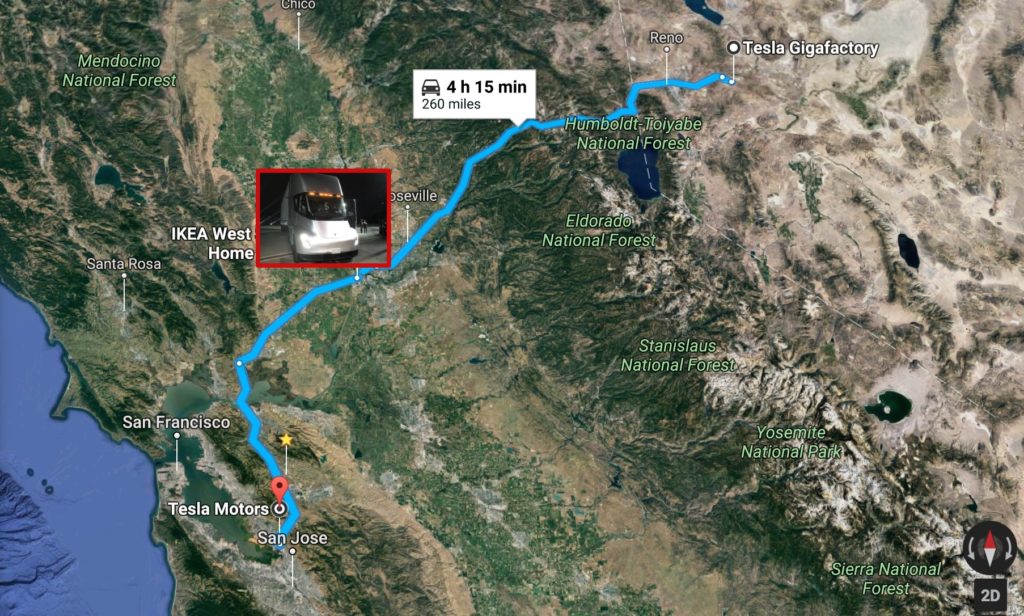 Considering the distance between the two Tesla facilities and the long-range Semi’s quoted range of 500 miles, the electric long-hauler could, at least on paper, easily travel between the two facilities without any difficulty. Coupled with several areas where the Semi’s regenerative braking could come into play, such as the 7,200-foot-elevated Donner Pass, the Semi’s specs seem more than enough to make constant trips between Tesla’s Fremont and Nevada factories.

While the Tesla Semi is expected to start production in 2019, the company has stated that it would be the electric long-hauler’s first customer. During a talk in the Netherlands, Tesla VP of Truck programs Jerome Guillen revealed that the company would be using the vehicles to transport components between the Fremont and Nevada factories.

“Tesla will be the first customer for its own truck. So we will use our own trucks to carry cargo in the US between our different facilities. We have (an) assembly factory in California, we have a battery factory in Nevada, so we’ll use our truck to carry things in between,” the Tesla executive said.

The Tesla Semi is poised to be a disruptive vehicle in the trucking industry the same way the Model 3 is for the consumer car market. During its official launch, Tesla CEO Elon Musk noted that the massive electric truck could haul 80,000 pounds (the industry maximum) of cargo faster than any other competing diesel truck of the same class. The truck is also equipped with a driving-assist feature to support Convoy Mode, which would give truckers a far easier time when traveling long distances.