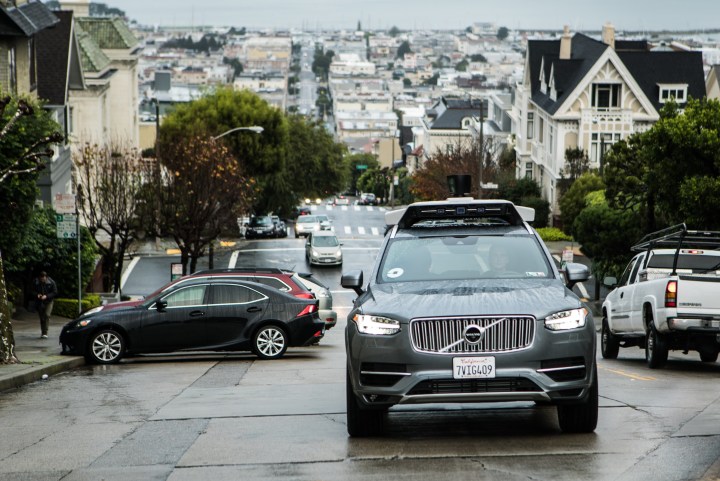 No longer will Uber’s self-driving cars be seen on San Francisco’s streets. The company announced on Wednesday that it was ending its autonomous car service, which began just a week ago, after clashes with state regulators and amidst much public concern.

The state’s Department of Motor Vehicles revoked Uber’s registrations, saying they “were improperly issued for these vehicles because they were not properly marked as test vehicles.” While competitors such as Tesla Motors, Google, and Nvidia have complied with state testing requirements, Uber claimed it didn’t need a permit, as it says its cars were not fully autonomous.

The sixteen Uber Volvo XC90s were equipped with a suite of roof-mounted sensors and dual driver controls. Two humans were onboard, one who was required to keep hands on the steering wheel at all times and another who monitored the technology.

Self-driving vehicles steer and brake independently but generally operate with a human in the driver’s seat who is prepared to assume driving responsibilities should the situation merit it. California law defines autonomous vehicles as those that drive “without the active physical control or monitoring of a natural person.” Under threat of legal action, Uber shut down the pilot program.

Brian Wiedenmeir, executive director of the San Francisco Bicycle Coalition, wrote on the organization’s website that, prior to Uber’s official launch, he encountered self-driving Ubers make multiple illegal and unsafe “right-hook” turns across bicycle lanes. “Those vehicles are not yet ready for our streets.” Uber, however, countered, explaining that a software fix for right hooks “has already been fixed operationally.” In other words, the two humans aboard were instructed to assume vehicle control when making these more complicated turns.

San Francisco Mayor Ed Lee commended the DMV for taking enforcement action against Uber. “I have always been a strong supporter of innovation and autonomous vehicle development and testing,” he wrote Wednesday in an emailed statement, “but only under conditions that put human, bicyclist, and pedestrian safety first.”

In a letter to Uber, DMV Director Jean Shiomoto assured the company that the department is a proponent of autonomous technologies. “We are committed to assisting Uber in their efforts to innovate and advance this ground-breaking technology.”

“Uber is welcome to test its autonomous technology in California like everybody else, through the issuance of a testing permit that can take less than 72 hours to issue after a completed application is submitted,” a DMV spokesman wrote in an emailed statement. “The department stands ready to assist Uber in obtaining a permit as expeditiously as possible.”

“We’re now looking at where we can redeploy these cars,” an Uber spokeswoman said in a provided statement, “but remain 100 percent committed to California and will be redoubling our efforts to develop workable statewide rules.”

Uber’s reveal of its San Francisco self-driving car rollout was quite the spectacle, intended to position the company as a keen rivals to its competitors. Anthony Levandowski, vice president for Uber’s self-driving technology, blogged that “the promise of self­-driving is core to our mission of reliable transportation, everywhere for everyone.”

Now Pittsburgh is the only U.S. city which allows Uber’s self-driving carshare service. No major incidents have been reported from the Pittsburgh test program, which began in September.