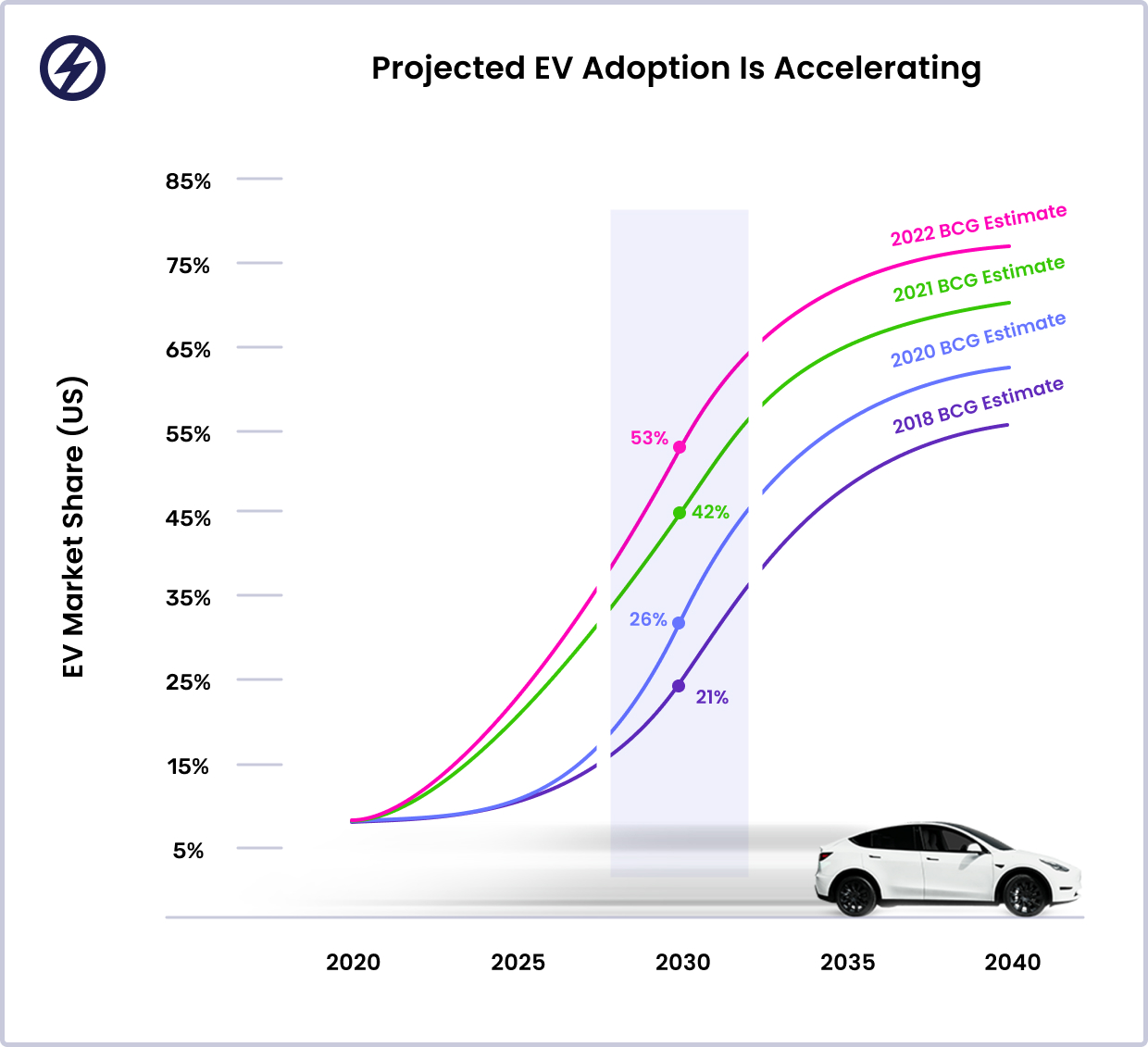 EV adoption in the U.S. happening much faster than anticipated, according to an observation of research by Recurrent Auto which is focused on providing transparency and confidence in pre-owned EV transactions. The research directly contradicts and challenges a statement by Jack Hollis, the executive vice president of sales at Toyota Motor North America.

In an interview with Teslarati, Recurrent CEO, Scott Case shared an observation of a study by Boston Consulting Group (BCG) which has released a market projection for EV adoption annually since 2018.

Scott told me that Recurrent noticed that BCG repeated the same analysis four times since 2018 and has gotten it wrong each time.

“What we’ve seen every time they’ve done this is that they’ve just missed their forecast and gotten too low every single time.”

He said what was really interesting was that they were seeing BCG’s forecast and noticed that despite having all of the data and models, they’ve been “systematically under forecasting how fast the EV adoption is going to happen.”

What Scott and the team at Recurrent found strange was that in the course of four years, the U.S. EV sales projections for 2030 more than doubled growing from an estimated 21% to 53%.

Scott pointed out that BCG isn’t the only company that has consistently missed how quickly the auto market is transitioning.

“The market adoption is just happening faster than any moment in the past. This is not about when we get to complete it, or what the numbers have been already. It’s what the best industry experts are forecasting about how fast this is going to happen.”

“We still have eight years between now and 2030. How many more times is this going to get forecasted? Eventually, they will get it right because we’ll be in 2030 and we’ll know exactly how many cars were sold that are EVs versus combustion engines. But there’s clearly only one direction that this adoption forecast is going.”

Scott went over the three major factors BCG uses in its model.

“First, it’s what are the projections for battery prices? This is a huge component of the cost of EVs. Second, is what the vehicle selection looks like and how many automakers are adopting different models. And the third is government policy changes. When you think about those three factors and over the course of the 2018-2022 models, you can sort of understand what’s been changing.”

Scott added that there was a 97% cost reduction in lithium-ion battery prices over the past three decades up to 2018.

“Since 2018, the decrease in cost flattened out, and even over the last year, it increased somewhat because of the supply chain difficulties and global issues. That’s not what was going on in this model. It’s not the battery price changes that are causing this forecast.”

“I think what you’re seeing over the course of this four-year period is the second factor. It’s vehicle selection and it translates into how many automakers are adopting and adding vehicles to their fleet. That’s a function of how automakers understand what consumers want to buy. I would say that this is a true reflection of market demand and not any government policy whether it’s a ban or a tax credit.”

Scott pointed out that next year, the Tesla Model Y will be the global best-selling vehicle without any help from any tax credit.

“You know what car it’s knocking off? It’s the Toyota Camry.”

One thing that BCG’s 2022 forecast did not include was the impacts of the Inflation Reduction Act which was signed just last month. Another thing not reflected in the 2022 forecast was California’s proposed ban on the sale of gasoline vehicles in 2034.

“California just passed the total ban on new ICE sales in 2035. Washington State where I live has–it’s nonbinding but it’s a 2030 cut-off. I’m not sure either of those is actually going to be needed because I think that the market going to take care of the transition well before those sales projections happen.”

“The most recent run of the BCG estimate was in the spring. They ran the model in the spring and published it in June. At that point, the Inflation Reduction Act was dead. Everyone thought the EV tax credit was dead and done. That doesn’t even reflect the impact of that. I would expect the next time that this model gets to run in 2023, you’ve got the impact of the EV tax credit which is a ten-year run, and the California gas car ban for 2035.”

He also said the bans will probably not be needed due to how fast the market is transitioning to EVs before they take effect. The forecast will most likely be even higher once they account for tax credits and the changing government policies.