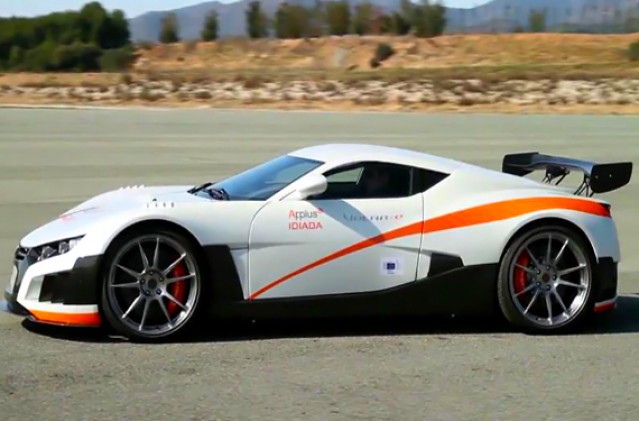 The Volar-e is one of the most powerful electric cars ever built and was showcased for the first time at a special event at the Circuit de Catalunya just outside of Barcelona, Spain, earlier today.

Its makers claim the car delivers a combined output of 1,000 horsepower and 737 pound-feet of torque, from a total of four electric motors powered by a lithium-ion battery.

The battery, which is made up of 10 individual cells, has its own rating of 38 kilowatt-hours and is said to take between 15 and 20 minutes to charge using a special fast-charging system. To help maintain charge, a regenerative system also features, helping to top up the batteries during breaking.

The technology behind the Volar-e was developed by Applus Idiada in collaboration with another firm specializing in high-performance electrics, Croatia’s Rimac Automobili, which recently unveiled its own 1,088-horsepower electric car.

Applus Idiada says the Volar-e will accelerate to 62 mph from rest in just 3.4 seconds and reach a governed top speed of 186 mph. Perhaps not surprisingly, the company hasn’t mentioned any range, as driving electric cars in race conditions is a sure way to deplete the batteries in a matter of minutes.

What may come as a surprise, however, is that the project received 50 percent of its funding from the European Commission, which says the aim of the project is to address the concerns of consumers who may be reluctant to purchase an electric car, such as limited driving range and long charging times.

The range of this vehicle is really going to be a determinant of whether the VOLAR-e can concept technology can be transferred to commercial use. It doesn’t really matter how fast an electric vehicle can charge and accelerate if it can only do one loop around the track before losing power. The design is beautiful, however the color scheme is definitely meant for a track car. Compare this to other super electric concept cars like the Eliica, the Ultimate Aero GT, and Venturi Volage.