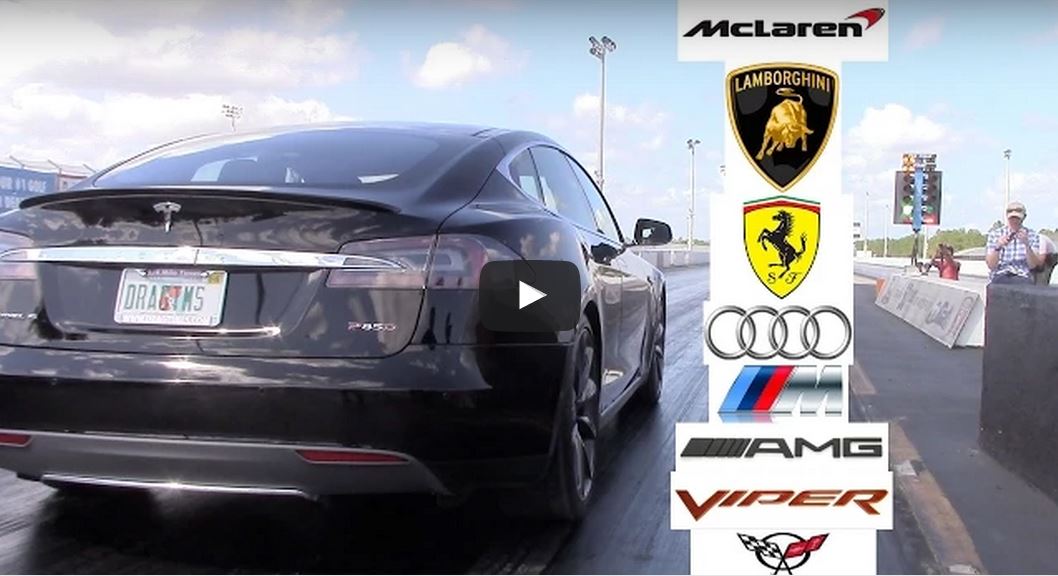 This Drag Times P85D video brings together all the fastest and most expensive cars on the planet and puts them up against the P85D. The Tesla easily wins every race.

Sure, we have all seen dozens, if not hundreds, of videos showing the Tesla Model S P85D shutting down all comers at the drag strip, but have you ever watched them all in one place, one after the other?

This video from Drag Times is proof beyond a reasonable doubt that the P85D is truly one of the great cars of all times. Why?  Because it goes about its business in a calm, dignified and (mostly) quiet way, while its competition features snarling exhausts and the sounds of expensive multi-valve engines revving up on the starting line.

In this P85D video, it makes no difference who the challenger is or how much it cost — the result is always the same. Thanks to the instantaneous flow of torque from the moment the lights on the  Christmas Tree turn green, the P85D simply rockets away down the track while the combustion engine powered car in the next lane waits a beat or two for the power to arrive. By the time it finally gets going, the Tesla is already car lengths ahead.

Sure, some of the sounds of those hyper-cars can stir the soul of a committed car guy. After all, one of the things that brings out crowds of people to local drag strips all across the country is the ear splitting madness of a Top Fuel dragster which joggles your intestines and sets your bones to clattering. That’s what people pay for.