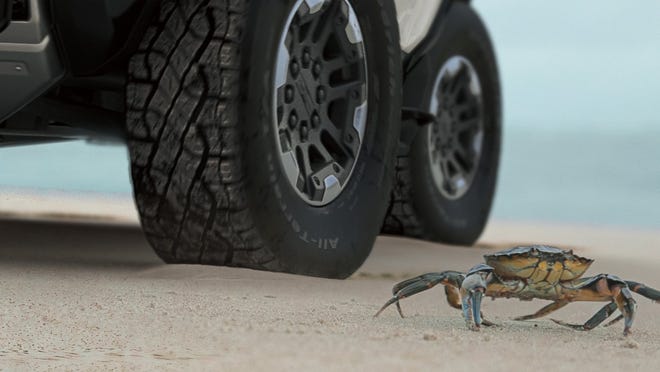 General Motors has announced that it will unveil the all-electric Hummer EV truck on October 20th. The legacy automaker will also detail the vehicle’s “Crab Mode,” which it teased last week with a cryptic logo that the company Tweeted.

GM confirmed that the Hummer EV would utilize Crab Mode, which will allow the all-electric truck to move across challenging terrain diagonally. The movement is similar to the way a crab navigates, and GM made it clear that the functionality will be beneficial for the vehicle’s more adventurous owners.

The company stated that it is “tailor-made for off-roading customers,” in a statement.

The addition of off-roading features to electric vehicles, especially pickups, helps some interested consumers answer their own questions of whether a battery-powered car can handle tough terrain. While this theory has been debunked several times in the past, no two automakers have the same technology. While one car company may have shown its technology to be functional enough in challenging terrain, other automakers may struggle with figuring it out.

Therefore, each carmaker has its own specific strategy of how its vehicles will attack rough and difficult-to-manage terrain. Tesla added an “Off-Road Mode” to its Model Y crossover, which proved to be beneficial for some owners who tested the all-electric car’s capability in less-than-favorable settings.

Crab Mode is GM’s take on how its EV will manage the terrain. By using a four-wheel steering system, the Hummer EV will aim to take on the most demanding roads with relative ease.

GM plans on expanding on the capabilities of Crab Mode during the October 20th event. “We will be taking reservations and expanding a little bit on what crab mode is, which has people intrigued … why it’s relevant in this space and what it can do,” Global VP of Buick GMC brands, Duncan Aldred said.

As far as the unveiling date, GM was supposed to reveal the truck on May 20th. However, the company was forced to delay the even due to the COVID-19 pandemic, which has effectively ruled out any large gatherings from taking place. The first sneak peek of the Hummer EV was pushed out to the public on Super Bowl Sunday, where GM took full advantage of the massive audience that watches the biggest day in American sports.

GM’s massive $20 billion push toward producing competitive electric vehicles will depend partially on the initial success of the Hummer EV. The name Hummer is synonymous with a low-efficiency humvee-style vehicle that the company released for the first time in 1992.