The Tesla Model Y is a quick and sleek crossover powered by an all-electric, but that doesn’t mean that the vehicle can’t handle rough and rugged trails in the mountains with the help of a lifted suspension and the company’s “Off-Road Assist” feature.

Brian Jenkins of the i1Tesla YouTube channel took his Model Y Performance into the North Carolina mountains to see if Tesla’s newest vehicle could handle the challenging terrain. Jenkins has made several modifications to his Model Y, which he refers to as the “Overlanding Build,” that would encourage the car to perform adequately in an off-road setting.

Jenkins installed a 4-inch suspension lift from Mountain Pass Performance to increase ground clearance, All-Season Toyo A/T III tires, aftermarket rims from TSW, and an Earthy-themed combat green wrap to his Model Y. With these modifications, he was ready to assess the capabilities of his electric crossover in a terrain.

Jenkins used 31-inch all-terrain tires from Toyo for increased confidence when maneuvering through the tough trails of the mountains. “These are probably the biggest tires you can put on a Tesla,” he said.

He also elaborated that the vehicle is not necessarily geared for off-roading, but more of an Overlanding style of driving. Overlanding describes a trip that requires traveling to remote destinations where journeying is the primary goal. Jenkins believes that the purpose of Overlanding captures his vehicle’s essence perfectly.

“That is what the Tesla is all about as far as going on trips. What better way to go off-road or into the wilderness than with a zero-emissions vehicle. Enjoy the adventure!”

To help the cause and test some of the Model Y’s unique features, Jenkins activated Tesla’s “Off-Road Assist” functionality, which improves traction and helps with overall improvements when driving on tricky terrains. The feature also works to balance the torque between and front and rear motors, which also increases traction during operation.

The Overlanding-geared Model Y encountered many tests during its session of driving. Steep hills covered with small rocks and small gullies that have damaged roadways were among the first terrain challenges that the all-electric crossover faced.

The steep terrain, nor the gulley managed to provide any challenges for Jenkins’ Model Y, as the vehicle was able to handle the deep divots in the road and the small rocks. Thanks to the upgrades that Jenkins made, combined with the confidence that the Off-Road assist feature provides, there was no issue with the electric car making its way through the problematic settings that it encountered.

Ultimately, Jenkins and his Tesla Model Y were able to climb the 3,400-foot mountain and reach the top. Along the way, the Model Y burned 38% battery, starting at 90% and reaching the peak at 52%. Thanks to Tesla’s regenerative braking system, the Model Y lost only 3% during the journey down the mountain. 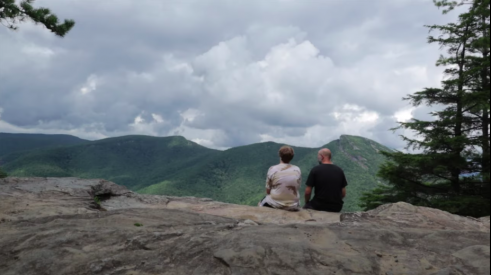 Jenkins and his son after conquering the 2,900-foot ascension up the North Carolina mountains. (Credit: YouTube | i1Tesla) 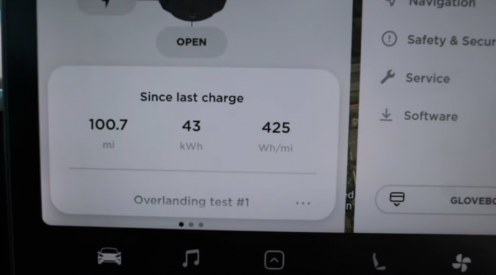 The total trip was 100.7 miles, and the Model Y used 43 kWh of energy during its 3,800-foot journey up and back down of the North Carolina mountains.

The Model Y was geared toward offering a sustainable crossover SUV from Tesla that would take a chunk out of the most popular vehicle segment in the United States. However, it is more than a grocery getter or a car to take the kids to soccer practice because it is capable of handling tough off-road terrain with relative ease. The test from Jenkins shows the all-electric crossover can handle difficult stretches of road, while still offering efficiency and world-class performance.

Watch Jenkins’ full Model Y climb in the mountains of North Carolina below.