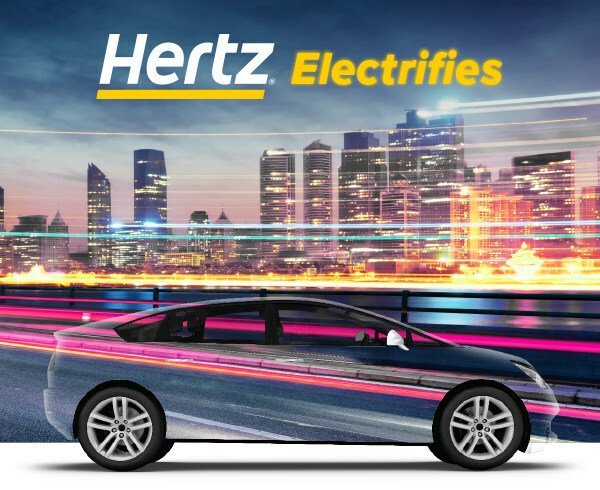 "Hertz Electrifies" is a new public-private partnership between Hertz and cities aiming to transform the rental car industry and accelerate mainstream consumer adoption of electric vehicles.

Hertz has made headlines over the past few years for making enormous purchases with Tesla, Polestar, and, most recently, General Motors. And as pointed out by the rental agency’s CEO, this has resulted in Hertz becoming the largest electric rental fleet in the nation. Now, the company is launching its electrified offerings via a campaign called “Hertz Electrifies.”

According to Hertz’s press release, it will deliver 5,200 EVs to its Denver locations while also helping place EV charging infrastructure at the Denver International Airport and surrounding Hertz locations. Hertz will also share driving telematics with the local government to help inform future EV charger placement. Hertz did not specify which city would be electrifying next, but the company stated that it will focus on large American cities over the coming months and years.

“Our goal is to reduce Denver’s carbon emissions 80% by 2050, and expanding the use and availability of electric vehicles will play a major role in helping us achieve that goal. This partnership with Hertz will provide invaluable data about where we need charging infrastructure the most, as well as provide new opportunities with this new technology to create good-paying jobs for our current and future workforce,” said Denver Mayor Michael B. Hancock

Hertz has ordered hundreds of thousands of EVs from Tesla, Polestar, and GM. The company ordered 100,000 Tesla Model 3s, an untold number of Tesla Model Ys, 65,000 Polestar 2 sedans, and most recently, 175,000 assorted EVs from GM. Each of these deals costing the American rental company billions of dollars.

From these orders, Hertz and its customers already feel the positive impacts. The rental agency has benefited from the incredibly high demand for EVs and the low ownership costs of the vehicles. And in turn, customers have benefited from the reduced cost of driving via affordable EV charging and an improved driving experience. But to meet the ever-growing demand for this transport option, Hertz will need to increase its EV ownership instead of gas vehicles continually.

Despite this enormous cost of electrification, the company is now far ahead of competitors that will likely need to spend similar amounts in the coming years. And with such clear benefits to the rental agency, its customers, and the community it operates in, there is no doubt that the shift will become ever faster in the near future.