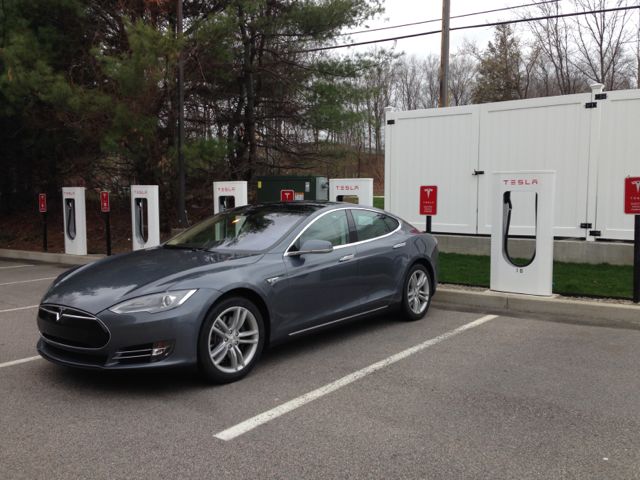 Today I had to drop off my mother-in-law at Providence airport and I used it as an excuse to make my first Tesla Supercharger visit at the East Greenwich, RI Supercharger. This is currently the northern-most Supercharger on the east coast in the US and located 10 minutes south of Providence Airport (PVD).

I decided not to charge up the night before and left my Model S with 127 miles of range on it. With that amount of range I would have enough to get to the airport, drive to the Supercharger and still drive home if for some reason the Supercharger didn’t work.

Connecting to the Tesla Supercharger Superchargers appear to have different layouts depending on the location, some you back into while others require you to pull forward – this one is the former. You’ll want to be pretty close to the Supercharger since the cable is relatively short. The charger will always need to be to the left side of the car since that’s where the charge port door is. The rear view camera helps a ton and combined with the parking sensors really allow you to get close without being too close. I love how the parking sensor displays your proximity measurements (in inches for the US).

Once parked and situated  you’ll want to pop open the charge port and insert the thick Supercharger cable. I had some difficulties with this at first and encountered a red ring indicating that there was a bad connection.

I pushed the handle in with a bit more force and noticed the red indicator light started to pulsate in green. The center touchscreen read “Preparing for charge” and so I waited. To my surprise the next message popped up and said “unable to charge” so I got out of the car, unplugged the cable and firmly reseated it once more. I waited through the same preparation phase until the car finally began to start charging.

I’ve heard from other owners that Tesla Supercharger connections can be a bit finicky at times so if you don’t succeed at first, try again before moving onto another charging bay.

Once you’ve successfully made it past the charge preparation sequence, the car will indicate that it’s starting to charge and display the voltage and amperage in which you’re charging at. It takes a few seconds before it ramps up to its peak charge rate which for me read 346 miles/hour at 262A/374V. The peak rate of charge will vary depending on whether its the older 90kW or newer 120kW Superchargers. I explored the shopping center where the Supercharger station was located. In fact the Supercharger bays at this location was simply eight additional parking spots slotted next to a Walgreens. There’s also an Outback, Ruby Tuesdays, Panera and McDonalds in the area all within walking distance. I decided to go into Panera for a warm drink. It was 40 degrees and approaching May – welcome to New England.
Another thing I noticed at the location is that 5 slots are marked for “Tesla Electric Vehicle” whereas the other 3 are marked for general parking 30 minutes. While I was sitting there waiting for my charge, a Walgreens customer took advantage of the 30 minute parking rule for a brief moment, but otherwise the slots were all open for Tesla owners. New England still ranks pretty low in terms of Tesla ownership per capita. All the displays on the car through the process were great. The one thing I wish they did was give you an estimated time to charge complete. The calculation isn’t simple since they’re varying charge over time, it depends on the state of the Supercharger, if the bay next to you is empty, etc. If it would pop up and say “You’ve got about 45 minutes to do something else” it would have been more helpful. I’m sure some smart people at Tesla can figure out how to do that.

In the end, I got 175 miles of range for free and the experience was great. Now all I need is an excuse to take an extended Supercharger road trip!