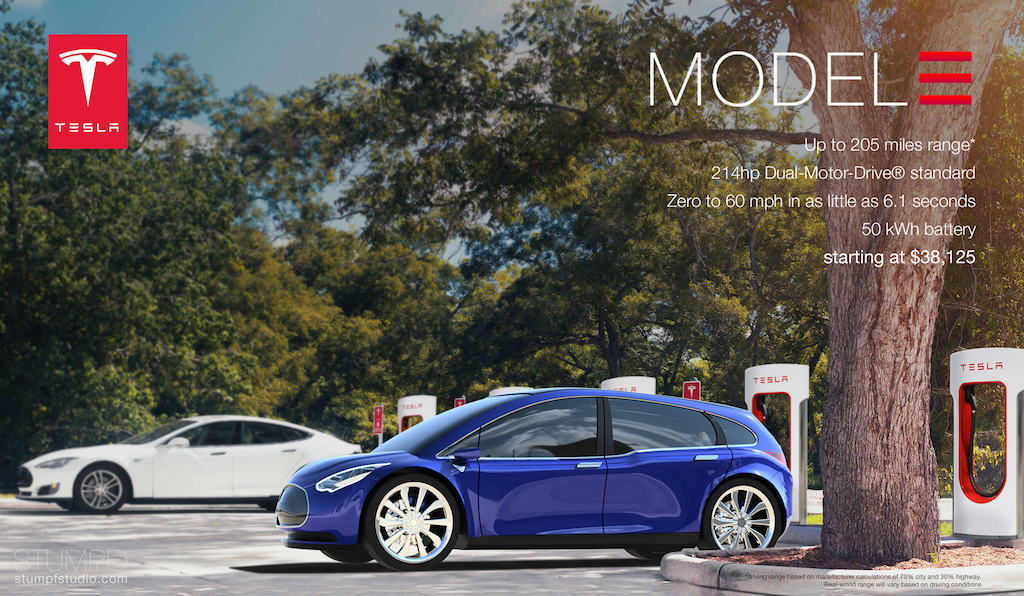 We have some idea about the size and features of the upcoming Tesla Model III. What we don’t know is what it will look like or how much it will cost. Tesla has been tight lipped about the Model 3 that is in the works. Elon Musk says it won’t look like any other car on the road, but what does that mean? Will it have 6 wheels or a raised seating platform so drivers can look down on the other, more mundane cars on the road? For guidance, we need to look at the words of Elon Musk himself.

Here’s what we know about the Tesla Model 3:

1. The Model 3 will be about 20% smaller than the Model S, says Musk. But in typical faction, he adds a hook to that statement. “One easy thing to do would be to make a 20 percent smaller Model S. That would be easy to do, but I think we might be able to do a few more interesting things than just that.”

2. It will probably be powered by the smaller of the two motors currently used by the Model S. “That smaller drive unit in many ways is a precursor for the Model 3. Because it represents a significant improvement in cost, and in steady state power, and a number of other factors. It’s a second generation motor, essentially, and that’s a good pathfinder for Model 3 on the powertrain side.” 4. It will arrive on time. Tesla seems to have learned from the on again/off again scheduling of the Model X that it is important to get this car to market when promised. A concept version of the Model 3 is expected to appear early in 2016. “We don’t want the delays that affected the X to affect the Model 3. We’re really being quite conscientious about this.”

Here’s what we don’t know:

1. What will the Model 3 look like? Stumpf Studio has released some design studies that may — or may not — offer clues to the appearance of the Model 3. Auto Moto has also floated its notion of what the Tesla Model 3 might look like on the internet. Bear in mind that neither are officially sanctioned by Tesla, even though the Stumpf Studios efforts include the official company logo. The Auto Moto concept incorporates some of the design language of the latest Jaguar F Type coupe, especially at the rear. One enthusiast’s rendition of what a Tesla Model 3 compact may look like. (Source: Autoevolution.com)

2. How much will the Model 3 cost? Elon Musk has said that Tesla will be selling “millions” of cars in a few years. But it won’t be selling millions of its Model S cars, despite the fact that the Model S is a wonderful automobile. Tesla needs a moderately priced car if it hopes to become a volume seller.

As far as anyone knows, the Model 3 is the car that will make Tesla a leader in the car business. That means getting the pricing right is critical to the company’s future. It is widely believed that the Model 3 will have about 200 miles of range and sell for around $35,000 after all federal and state incentives. But is that realistic?

One skeptic, Menahem Anderman, predicts Tesla will have to charge at least $50,000 for the Model 3 in order to make money. Anderman is not some flake. He has organized the Advanced Automotive Batteries Conference for almost two decades now.

3. When will it arrive? There are rumors that a concept car will appear in the spring of 2016, with production beginning sometime in 2017. But Elon Musk, despite his many good qualities, has always been overly optimistic about when Tesla products will be market ready. The Model S was almost two years late arriving and the Model X has had numerous delays.

How accurate is that “sometime in 2017” prediction for the Model 3? That’s anybody’s guess. One thing is for certain, though. The Model 3 will probably not feature anything resembling the “falcon wing” doors that are the trademark of the Model X.