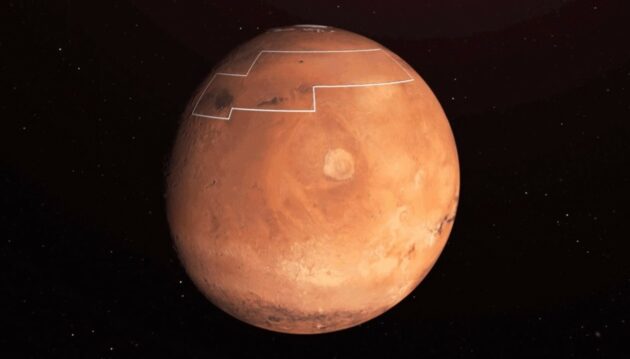 A view of the ice cap at Mars' north pole. Credit: ESA/DLR/FU Berlin

Mars: beautiful, desolate, and the planet in the solar system whose seasons most closely match ours.

The European Space Agency (ESA) recently released an image of the red planet’s north polar region and its stunning ice caps. The image coincided with the Seventh International Conference on Mars Polar Science and Exploration which took place last week (Jan. 13 to 17) in Argentina.

The image, taken by the Mars Express orbiter, highlights some of the natural processes that shape the planet’s surface.

Mars may seem like a dry, desert-like world devoid of water, but its supply is locked up at the poles. Thick layers of water ice cover the Martian polar regions all-year long, with an added layer of frozen carbon dioxide forming in the frigid winter months.

In the image, the Martian terrain peeks through the ice, appearing as zebra stripes. This view highlights the stark contrast between the ice and ruddy Martian terrain.

The stripes are part of larger spiral patterns that emanate outward from the center of the north pole. But what causes them?

Scientists think that this unique pattern is formed by katabatic winds, that carry higher-density air to lower elevations. On Mars, these winds ferry cold, dense air from the regions’ glaciers down to lower elevations containing valleys and depressions.

At the same time, Mars is rotating (just like the Earth) creating another cool phenomenon called the coriolis effect, which manifests as the spiral pattern we see in the image. (On Earth, the Coriolis force is seen in weather events such as hurricanes.)

Scientists are very interested in the ice deposits covering Mars’s polar regions. Not only do they contain evidence that can tell us how the red planet’s climate has changed over millions of years, but it’s also a source of water for future human missions.

The Mars Express orbiter was designed to study the red planet’s surface processes over time, documenting seasonal changes at the poles as well as track winds and any storms that pop up.

To date the orbiter has lived up to the task, expanding our understanding of just how wet ancient Mars was. It also sheds light on activities below the planet’s surface.

Understanding what sort of processes are happening at the poles will help inform future human missions to the red planet, especially in regards to the search for water.

Water is a precious commodity and if there are other places thanks to some recent data, NASA is hoping that future missions can land a bit further south, near a region called Arcadia Planitia, and rely on its water resources instead of having to travel to the poles and hauling water back.