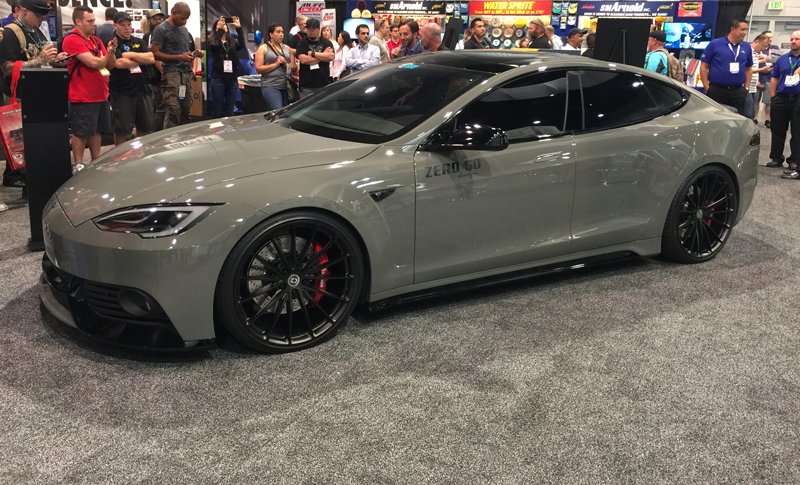 When the SEMA show went down in Las Vegas, I was particularly delighted to see so many companies featuring a Tesla on display at their booth. But one particular Tesla Model S made a splashy entrance at this year’s automotive specialty parts trade show when it unveiled a wide body transformation of the all-electric sedan.

I had the opportunity to sit down with Kenny Pfitzer at Zero to 60 designs to discuss his Zero TS body kit custom-designed for the Tesla Model S.

Pfitzer started restoring cars like the 1960 Volkswagen Microbus in his Dad’s garage. As a teenager, he learned the craft from his father Karl Pfitzer who was a rocket scientist with NASA. Later, Kenny went on to a prolific 20-year career at Metal Crafters, Foose Designs, and West Coast Customs where he worked on high-profile celebrity car builds made popular on their TV show.

Pfitzer started Zero to 60 designs to be one of America’s top creative automotive design houses. He decided his marquis project for SEMA this year would be a completely reimagined Tesla Model S. Pfitzer explained that he designed a full Model S body kit including a customized front, rear, rockers and optional side fenders to give it a bold, performance look.

Above: Subtle side fenders add style along with new wheels (Photo: EVANNEX)

Pfitzer noted that the Tesla Model S he had on display at SEMA included a $40,000 exterior PPG paint job in dolphin gray with a Solar Gard clear topcoat to help protect the finish. In addition, this Model S was also fitted with black HRE wheels, custom Brembo brakes, and Nexen Nfera tires.

Pfitzer also showed me the interior which was transformed with a European red leather — double-stitched in an ornate diamond-shaped pattern. Bolsters were also added to the seats for extra comfort. In addition, the windows were tinted with Solar Gard’s LX Series protective window film. Pricing for the Zero TS hadn’t been finalized but Pfitzer said the body kit starts around $6,500 and goes up from there.

In the past, Pfitzer had worked with the Ford Motor Company to develop their Ford Bronco Concept. So, I wouldn’t be surprised if he’s angling to have this customized Model S catch the eye of Tesla’s internal design team. In any event, judging by the chatter at the unveiling, the SEMA crowd seemed quite impressed with the car. And based on this successful showing at SEMA, it’s likely you’ll be seeing more from Fitzer (soon) with the Model 3.