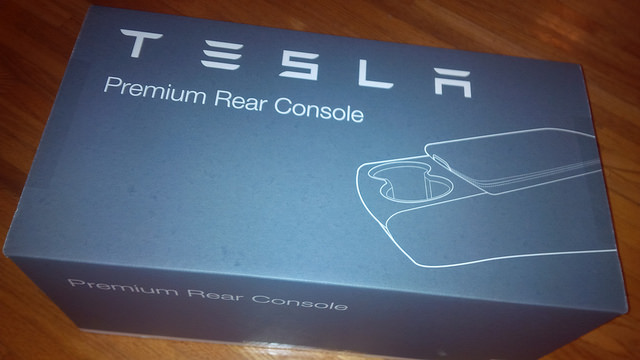 Most of the time I drive alone or with my wife on our Model S. We rarely use the rear seats for passengers. However, when we do, it’s usually one or two other people, and rarely are we fitting three people in the vehicle. It’s nice to have the option to fit three people, but we often ride with less.

One of the complaints that is common to owners of Model S are the lack of cup holders in the vehicle. The rear part of the vehicle have no cup holders unless the owner of the Model S opts for a rather interesting solution from Tesla.

I was uninterested in this rear cup holder solution and was surprised when I found the Premium Rear Console on Tesla’s site.

Since we rarely travel with five people, we figured that the Model S Premium Rear Console from Tesla would provide some traveling in style for our passengers. The installation instructions for the Model S Premium Rear Console seemed simple enough. The following pictograph was included in the shipment.

The box is nicely packed with the pictograph instructions.

What you’ll want to do is lengthen the hook and get it ready to slide under the center section and hook it on to the center child restraint. Feed the hook towards the trunk area and attach the hook the the latch on the back of the seat. Once it’s latched on, pull it tight in order to secure the rear console to the back seat. It took me about 20 minutes to install for the first time. This is going to go faster as I remove and re-install it in subsequent times.

Overall, I like it although the $600 starting price is somewhat pricey, but it works for us.

The original version of this review was published on Dennis’ blog.

It’s a great looking rear console for the times that you want your rear passenger to feel comfortable in the back. It fits nicely, but does move when passengers put weight on it as it is only secured by laying on top of the seat and the single child-seat latch in the back of the seat. The price point is a little expensive and is the most obvious deficit.