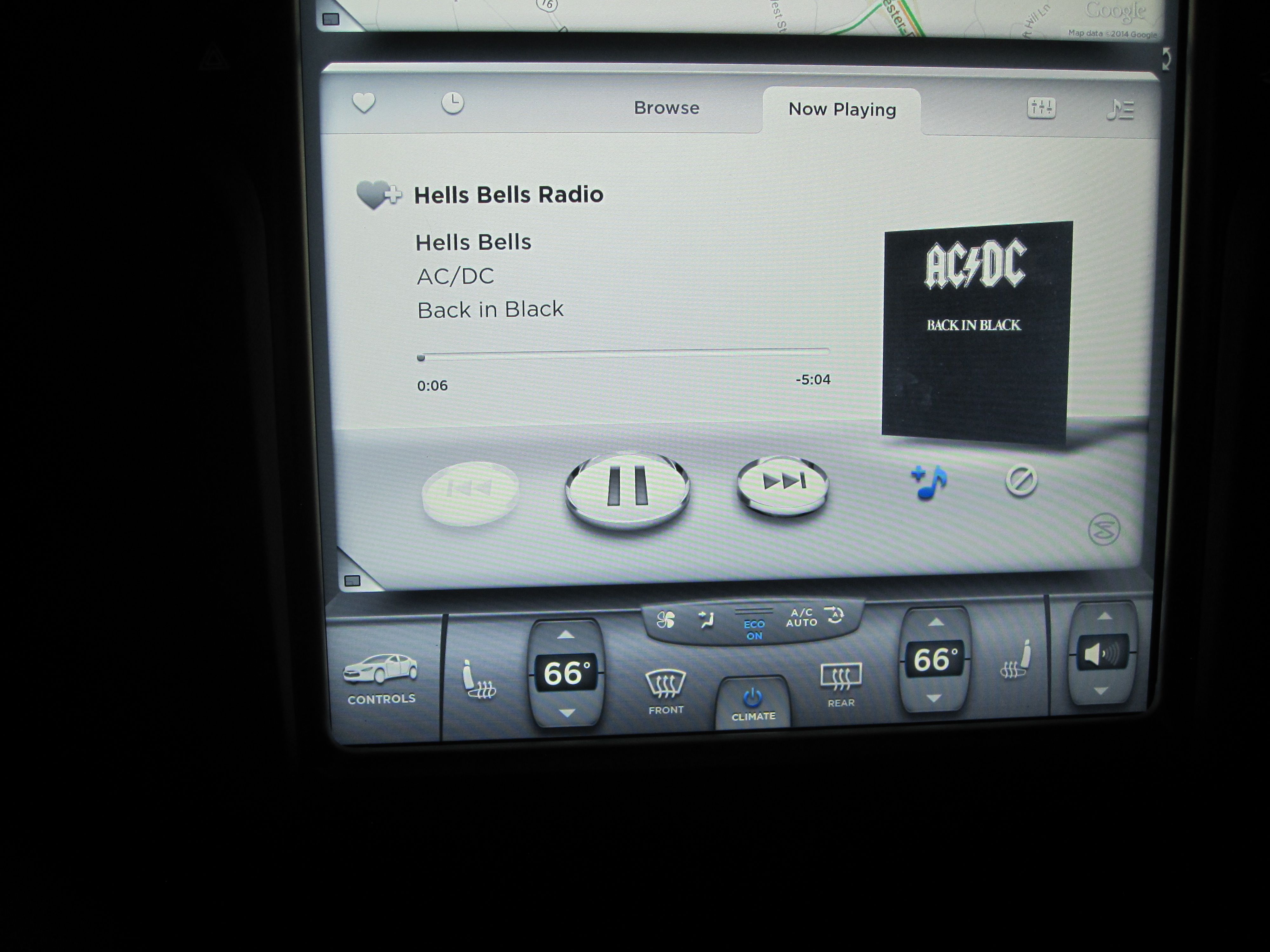 Before taking delivery of my Model S I had only heard about Slacker radio as a feature included with the Model S and even then I didn’t do any reading or research on it. I just figured it would either be useful or not, no big deal. I had low expectations. At the time I sort of thought it was going to be a bit like Pandora which I had used on and off in the past.

Slacker is one of two internet radio options included on every Tesla Model S. I’ll cover the other one, TuneIn, at some other time. Slacker Radio is music delivered over the internet via the 3G connection within every Model S. What’s great about the version of Slacker that comes equipped with the car is that it’s commercial-free.

Slacker appears to have two paid versions available, and the one provided with the Model S seems to fall somewhere in the middle in terms of features:

Full disclosure: this is my hack of a feature chart based on what I saw

It will be great if someday Tesla also added the lyrics and custom playlists options that Slacker is capable of.

Slacker offers a number of playlists you can choose from that are specific to genres, popularity etc. I find the selection to be quite rich. With Slacker you can listen to unlimited ad-free music of your preference any time you want. But what if a song comes on that you don’t like?

Slacker Controls on the Model S The basic options to Pause/Play and Skip songs are all there, but what’s missing is a re-play or go back to the previous song button. You may be able to get to a previous song with music search (more on that later) but otherwise once played it’s gone.

Two other options that I enjoy on Slacker are the “I like this song” and a “I hate this song” icon. This sends your preferences to the Slacker app, and in theory it should use this information to either play more songs like the one you liked, and omit the ones that you do not. Whether it’s using that information for more intelligent behavior tracking is unknown.

You can favorite stations which are either ones you’ve picked from a list or ones you’ve found via search, but you can’t favorite individual songs. Overall the controls are really decent. The Model S allows you to play songs on demand using the “push to talk” button situated on the right of the steering wheel.  Holding it down and speaking the name of the artist, song or both will return a list of results that matches your criteria.

What’s interesting is that selecting a result from the list doesn’t necessarily mean you’ll hear that exact song that you selected. It’s merely a station that Slacker feels is within that genre/category. Your song will eventually come up, but it’s definitely not always the first one played.

ALSO SEE: The Sound in the Tesla Model S Your Slacker equipped Model S gets the music over the internet via 3G connection. It requires a normal user account and password to connect, but thankfully Tesla pre-configured it using their own account. You can use your own Slacker account if you choose to do so, but unless it’s a Slacker Premium account with custom playlist settings, its really not worth your time.

One really cool feature of Slacker in the Model S is that you can pause and resume music at any time. It does this on its own when you exit the car. That means you can be listening to a favorite song, go out and do some shopping, get back in and the music will resume from where it last left off. You’d expect this behavior from a DVD or USB player, but not from internet radio. Pretty cool.

That said, there’s also a quirk in Slacker that makes it skip to a new song after resuming from a previous one. People have speculated that this may be due to some legal licensing limits, or perhaps even bugs in the Tesla or Slacker systems or software. Either way its annoying on the rare events it does happen.

I’ve been pleasantly surprised with how well Slacker works in the Model S. The album art is great, the controls are good and the sound quality is fine for me (even on the “medium” setting). Although I was disappointed with the USB music player, the Model S Slacker Internet Radio functionality is impressive.