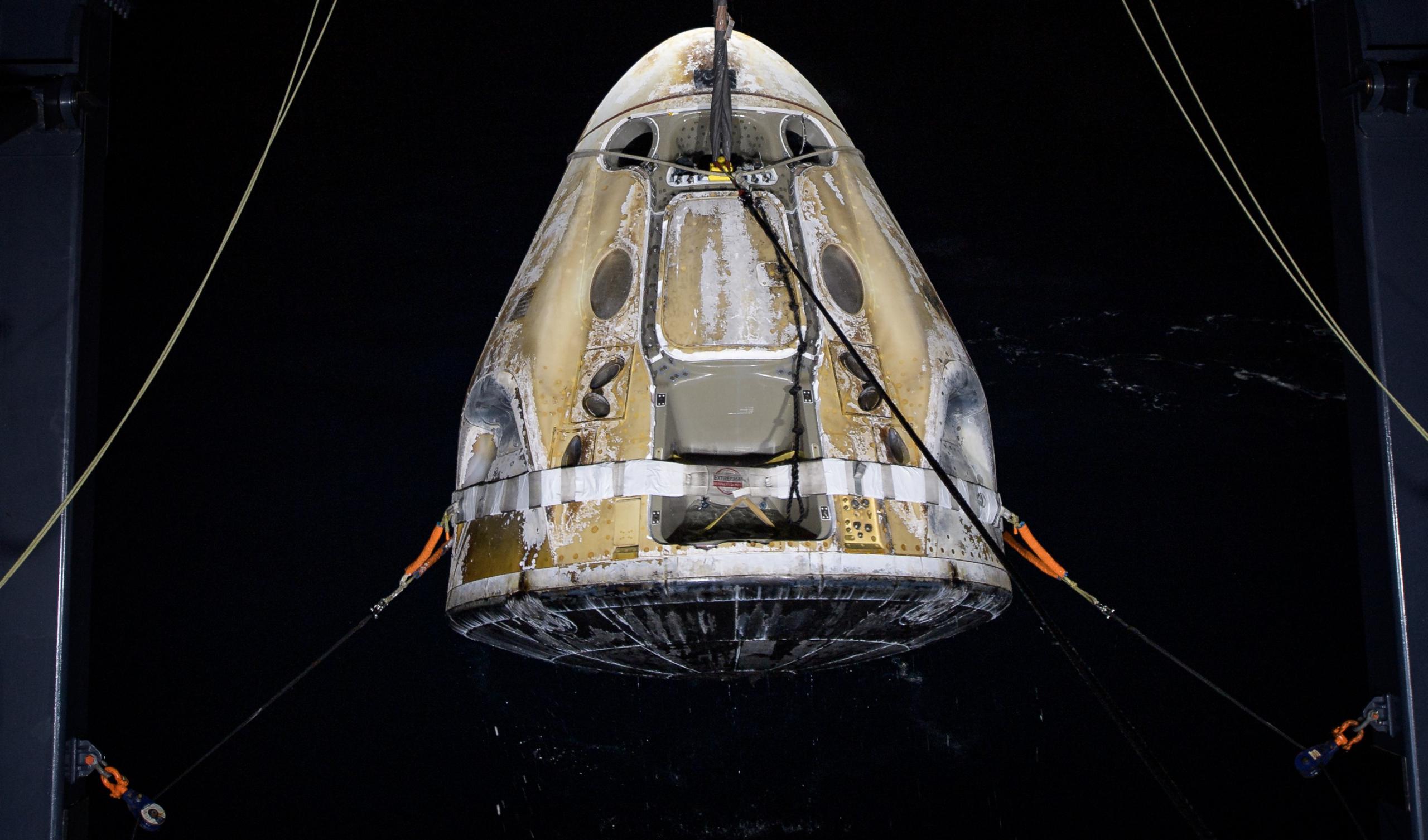 Crew Dragon and four astronauts are lifted aboard a SpaceX recovery ship just half an hour after splashdown. (NASA)

SpaceX’s first operational Crew Dragon spacecraft has safely returned its four-astronaut crew back to Earth after a record-breaking voyage in space.

Around eight hours after JAXA astronaut Soichi Noguchi and NASA astronauts Shannon Walker, Victor Glover, and Mike Hopkins undocked from the International Space Station (ISS) and began their descent, Crew Dragon ‘Resilience’ (capsule C207) gently splashed down in the Gulf of Mexico a few dozen miles off the coast of western Florida. Marking the second crewed splashdown of the first crewed US space capsule developed and flown since the end of the Apollo Program almost half a century ago, SpaceX’s successful Crew-1 recovery is extraordinarily significant.

First and foremost, Crew-1’s recovery marks the first time in US history that a crewed spacecraft has successfully returned orbiting astronauts to Earth after spending more than a few months (84 days) in orbit. In fact, Crew Dragon C207 ultimately doubled that Apollo era record, spending a full 168 days (almost six months) in the vacuum of space. Only Russia has extensive experience operating crewed spacecraft in space for half a year or more, meaning that NASA and SpaceX were venturing into the (relative) unknown with their first attempt at a similar feat.

Had something gone awry during Crew-1’s ISS departure or reentry, descent, and splashdown, SpaceX and NASA could have been forced to grapple with the fact that Crew-2’s Crew Dragon might not longer be considered safe enough to return its own four-astronaut crew back to Earth five months from now. Of course, the duo assuredly didn’t make the decision to fly Crew-2 before Crew-1’s recovery lightly and there was clearly a significant degree of confidence that an extra ~100 days in orbit would be a marginal risk – but a risk it still certainly was.

Thankfully, Crew-1’s ISS departure and splashdown was truly flawless, effectively retiring what little risk remained and confirming beyond a shadow of a doubt that SpaceX’s first crewed spacecraft is safe for human spaceflight.

Notably, in another demonstration of NASA’s increasingly extraordinary trust in SpaceX, Crew-1’s recovery was the first time a crewed spacecraft has landed in the ocean at night since Apollo 8 splashed down in 1968. While obviously far from preferable compared to a normal daylight recovery, sea and weather conditions were apparently too good to pass up and SpaceX’s recovery teams have already extensively trained for nighttime splashdowns.

Just a few weeks prior, the exact same Crew Dragon became the first US spacecraft ever to switch docking ports while in orbit – a feat it completed without issue. In other words, Crew Dragon Resilience (C207) is the first crewed space capsule to fly four people, splash down at night, and switch docking ports in orbit, as well as the first US crewed spacecraft to spend more than three months in space and first privately-developed spacecraft to complete an operational astronaut transport mission.

Now that Crew-1 has vacated its ISS docking port, SpaceX’s second upgraded Cargo Dragon spacecraft is clear to launch and dock with the ISS as early as June 3rd. In late October, SpaceX is scheduled to perform an almost identical Dragon ‘hand-off,’ launching Crew-3 and four more international astronauts to briefly join Crew-2’s Dragon at the ISS before the latter vehicle heads back to Earth with its own crew of four.