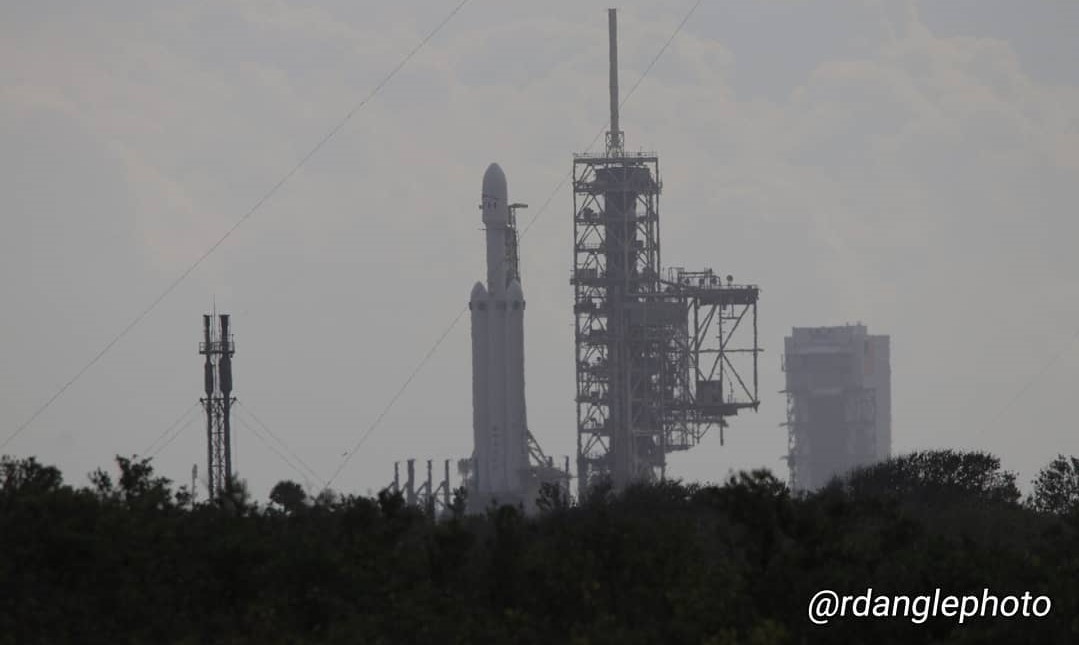 After approximately half a decade of concerted and less-than-patient waiting, long-time followers of SpaceX have, for the first time ever, seen SpaceX’s first completed Falcon Heavy rocket roll out to the launch pad and go vertical at the same complex that hosted every single Apollo moon landing, LC-39A.

This is a historic moment in SpaceX’s history, even if it culminates in nothing more than a quiet rollout and roll-back to the historic pad’s integration facilities. For at least several years, it has been a running (lighthearted) joke within the fan community that Falcon Heavy is permanently six months away from launch. Outside of the rocket company’s supporters, however, that fan humor gained a heavier tinge, and Falcon Heavy essentially became the strawman with which SpaceX detractors could ream the company’s greater (and even relatively minor) ambitions as over-promised, unrealistic dreams to one day also become permanently delayed. While seasoned spaceflight journalists rarely partook in the Falcon Heavy bashing, pop journalism and the titans of the global launch industry certainly took advantage of the apparent weakness as the preeminent example of SpaceX’s tendency towards delays. Even SpaceX’s conservative supporters understandably saw the significance when two customers ultimately chose to move their payloads elsewhere due to Falcon Heavy’s relentless delays.

Falcon Heavy went vertical at LC-39A for the first time today! Here’s a few shots (taken through much haze) from Playalinda Beach. pic.twitter.com/gsOL9tAfTN

However, the reality was rather clear to those that followed the agile launch company and paid attention to the statements of its executive management, including CEO Elon Musk. Ultimately, Falcon Heavy was not a priority and was only ever going to capitalize upon a minority of the satellite launch industry, given the rarity of satellites heavy enough to need the massive vehicle. While Falcon Heavy would undoubtedly be invaluable for SpaceX’s grander ambitions of interplanetary exploration and transport, those ambitions simply did not compare in importance to solving Falcon 9 design and supply chain issues that caused the failures of CRS-7 and Amos-6. Nor were they more crucial than the launch company’s need for a stable cadre of trusting customers, simply upgrading the already-operational Falcon 9, or the perfection of first stage reusability – all of which would explicitly impact the utility of Falcon Heavy.

A panorama of LC-39A from late-November. Falcon Heavy will likely launch from this pad in January 2018. (Tom Cross/Teslarati)

SpaceX’s official July 2017 confirmation that Red Dragon had been cancelled further guaranteed that Falcon Heavy would only ever be a niche product, maybe even little more than a symbolic stopgap to fill a tiny industry niche and soothe delay-stricken nerves. SpaceX does have at least a handful of Falcon Heavy customers still hopefully awaiting its operational status, but it is quite clear that the company sees its value most as a method of both reassuring the world that its infamous delays are only temporary, as well as relatively economically fueling the development of a reusable super-heavy launch vehicle, expertise that would inevitably benefit the Mars-focused BFR as it too begins development. At a minimum, it will provide SpaceX’s launch, design, and manufacturing experts a sort of base of knowledge about building and operating rockets with ~30 or more first stage engines – the 2017 iteration of BFR is likely to sport 31. It’s also possible that Falcon Heavy could provide the margins necessary to allow SpaceX to attempt recoveries of Falcon’s second stage, a purely experimental effort that would feed directly into the development of the fully-reusable BFR upper stage the company hopes to build, BFS.

Thus, while Falcon Heavy’s inaugural launch may not be explicitly important to SpaceX’s near-term business strategy, it will in almost every way mark one of its first tailor-made steps towards Mars, perhaps both literally and figuratively. Rather humorously, SpaceX (or Elon Musk … probably just Elon Musk) has chosen to replace the boilerplate mass simulator often flown as a payload for inaugural launches of most launch vehicles (Falcon 9 included) with a rather unique mass simulator: Musk’s own first-generation Tesla Roadster. While it has yet to be specified what the specific destination of the second stage and Roadster are, nor what – if any – functional payload is to be included, Musk did suggest that the destination would be a “billion-year Mars orbit.” The nitpick here is hugely significant, as ‘simply’ launching the Roadster into a solar orbit at a similar distance to Mars (still an impressive accomplishment) would be decidedly less impressive than actually injecting the Roadster into orbit around Mars. Pictures released by SpaceX show no additional boost stages attached to the Roadster, so a Martian orbit would require Falcon Heavy’s second stage to coast in deep space for several months while generating enough power to prevent its propellant from freezing and maintain contact with ground control, especially in the rather likely event that SpaceX (and Musk) hope to acquire some rather absurd and iconic images from the inaugural launch and its space travels. 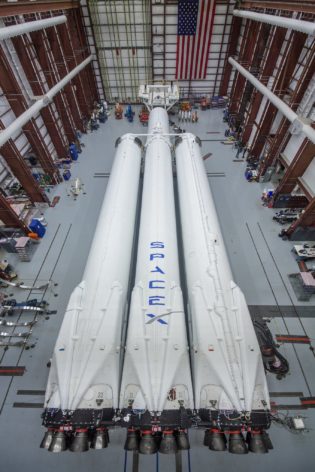 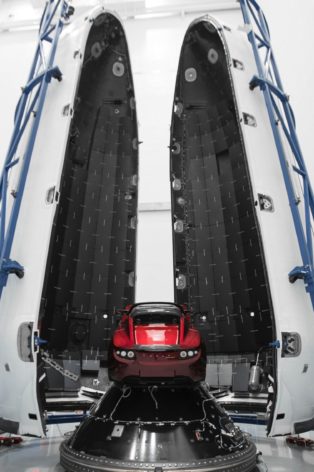 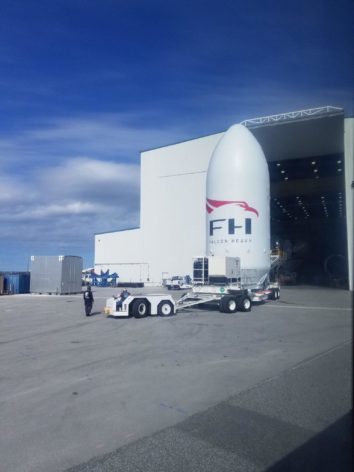 History and symbolism aside, it can now be said with utter certainty that Falcon Heavy is very real and is likely to launch very soon. The vehicle’s first-ever integrated rollout to Pad 39A is almost certainly intended only for “fit-checks,” a verification that the pad and brand new vehicle are meshing well together, but it is still the first time in the company’s history that FH visibly exists, and there can be little doubt that the photo opportunity was not taken advantage of. After fit checks are performed, likely over the course of a day or two, Falcon Heavy will be most likely be brought horizontal and rolled back into 39A’s integration facilities, where it will be prepared for its first full-up wet dress rehearsal (WDR) and static fire, possibly including the cautionary removal of the second stage and Roadster payload. Because the vehicle is inherently new, as are many of the upgraded ground systems needed to support it, bugs are highly probable along the road to launch. However, if the first WDR and static fire go precisely as planned, the first launch attempt can be expected to occur about a week later – maybe sooner, maybe later.

All things considered, SpaceX is clearly moving full speed ahead with Falcon Heavy’s launch preparations, and it seems highly probable that the company’s schedule will allow for January launch, even if minor issues mean that multiple WDRs or static fires are required. Elon Musk certainly hedged his bets earlier this summer by aggressively inflating the probability that Falcon Heavy fails on its launch pad, famously stating that a success in his eyes would be the vehicle clearing the pad without destroying LC-39A. In reality, SpaceX would not in a million years haphazardly risk the destruction of Pad 39A, and the company is almost certainly quite confident that the pad is at most marginally at risk of severe damage. One thing that Musk cannot be criticized for is the argument that one way or another, Falcon Heavy’s inaugural launch will be a sight to behold. While the payload may indeed be heading to or towards Mars, SpaceX still plans to attempt recovery of all three of Falcon Heavy’s first stages: both side cores are expected to land almost simultaneously at LZ-1’s two landing pads, while the center booster will follow a parabola out into the Atlantic for a landing aboard the droneship Of Course I Still Love You, truly a spectacle to behold regardless of success or failure.

My capture of @SpaceX #FalconHeavy making her #39A debut today. Taken with my Nikon D3300 with 300mm lens from the Canaveral National Seashore Vista 8. I must admit I have enjoyed watching the reactions to seeing it on the pad. My reaction… WHOA @NASASpaceflight @lorengrush pic.twitter.com/fEntFCwCO8

Follow along live on Twitter and Instagram as our launch photographer Tom Cross documents Falcon Heavy’s last steps along its journey to first flight, as well as Falcon 9’s imminent launch of the mysterious Zuma payload, currently NET January 4.