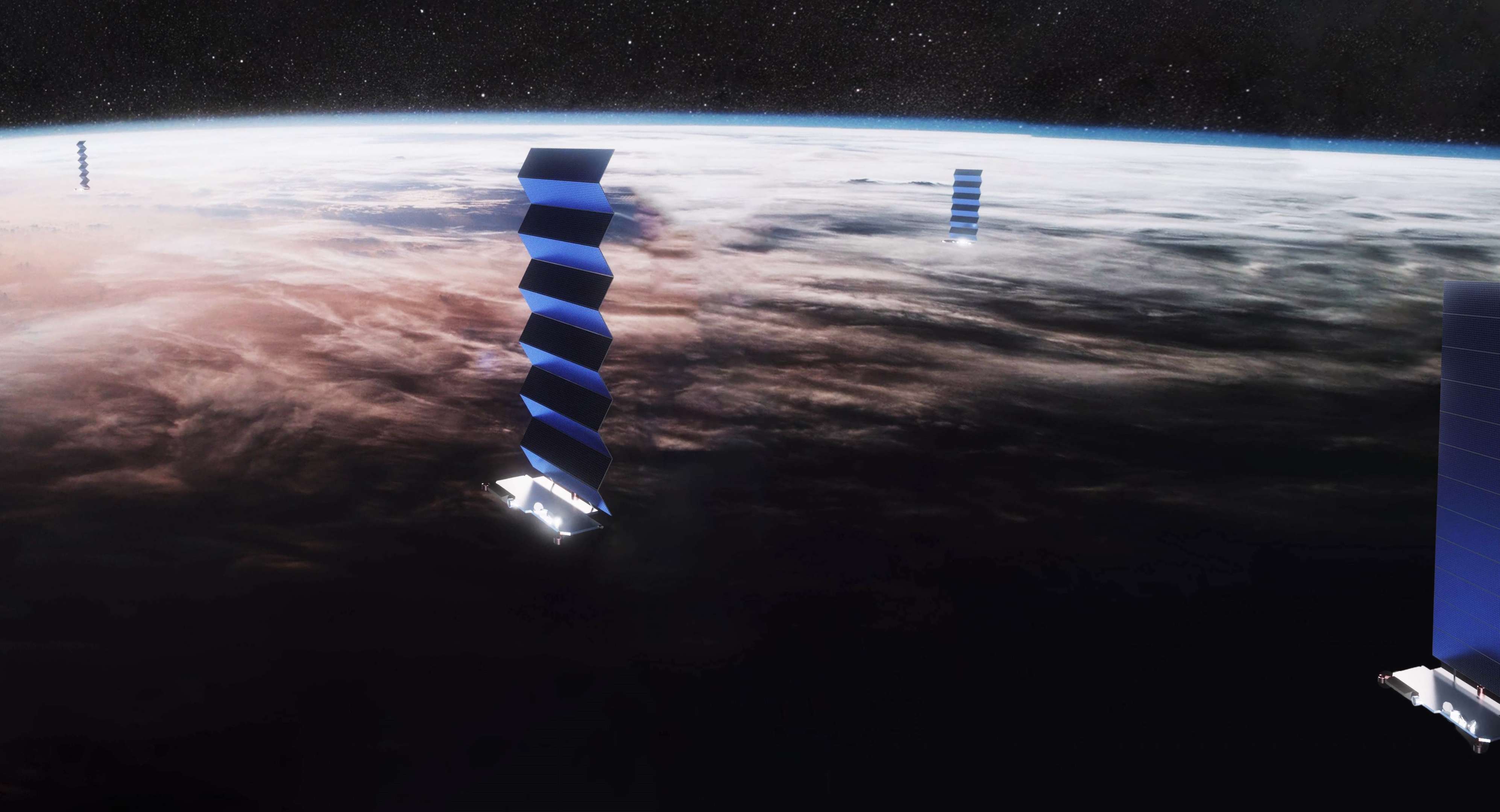 SpaceX's Starlink satellites have triggered a minor Twitter uproar among fans/practitioners of astronomy and spaceflight. (SpaceX)

Just a handful of hours after SpaceX successfully placed all 60 of its first Starlink v0.9 satellites in orbit, ground observers began capturing and sharing spectacular nighttime views of the spacecraft. Soon after, fans and practitioners of astronomy and spaceflight began bickering.

The topic of concern: light pollution, not from lights on the ground but from sunlight-reflecting satellites in orbit. Immediately after launch, the ‘train’ of 60 Starlink satellites were undeniably spectacular, easily visible to the eye and as bright or brighter than the brightest stars in the sky. For the most part, reactions seemed to lean more towards awe than concern, but it didn’t take long for people to begin extrapolating from 60 satellites to Starlink’s peak of ~11,900 (an increase of 200X), and some responses began to paint SpaceX’s constellation in a more negative light.

Fans, communicators, and practitioners of astronomy quickly grew into the loudest voice in the room, as fans of SpaceX and Elon Musk started to engage, ultimately making it clear that low Earth orbit (LEO) megaconstellations could soon become a highly controversial topic for unexpected reasons. As is typical of humans in the age of social media, the gentlest hint of controversy and criticism swelled into stone-throwing between two crystallized sides unwilling to breathe and engage in civil debate.

Meanwhile, barely 24-48 hours had elapsed since the first Starlink satellite reached orbit – not their final orbit (550 km) but an insertion orbit at ~450 km. Almost immediately, serious observers noted that the Starlink satellites were rapidly spreading out and dimming as they got to work raising their orbits with onboard ion thrusters. Situated in an urban area, Teslarati photographer Tom Cross described the Starlink ‘train’ as “way too faint to capture” on the evening of May 25th, although they were still subtly visible to the naked eye.

From a practical perspective, it should come as little to no surprise that Starlink satellites are visible – even highly visible – from the ground, particularly in areas with minimal light pollution. SpaceX’s flat-panel design and the location of their antennas means that each satellite will have a metallic, shiny surface constantly facing towards the ground, perfect for reflecting sunlight. Additionally, every satellite has a fairly large solar array, likely measuring about 3m by 12m (10ft by 40 ft). Combined, the 60 satellites have a collective solar array area of more than 2000 square meters (21,500 ft^2), nearly the same size as the International Space Station’s football field-sized arrays.

Here’s a 30 second long exposure of #starlink satellites marching across the sky. I saw them, framed this up, and started it as quickly as I could so there is zero creativity or planning here but I GOT THEM! Aghhhh. @elonmusk — you seen your satellites overhead yet? pic.twitter.com/91KzFKOUq1

However, the visibility of SpaceX’s Starlink satellites for laypeople was never the most contentious concern or a leader of vitriolic responses. Rather, even if the ~12,000 proposed Starlink satellites are minimally visible to the naked eye, they will almost certainly still appear in the sort of long-exposure images used by astronomers to catalog, track, and better understand the universe. This is a reasonable concern and one that should come as little to no surprise, given that astronomy already deals with the thousands of operational and defunct satellites, rocket upper stages, and pieces of large space debris already in Earth orbit.

The problem with giant LEO constellations is that satellites in LEO can appear far brighter and far larger than the traditional geostationary satellites used to provide communications services. This is a critical benefit for the spacecraft, as geostationary distances (~36,000 km, 22,000 mi) create major latency (lag) problems for communications networks.

Will Starlink (alongside other constellations from Telesat, OneWeb, and LeoSat) destroy the night sky as we know it, ruining the perfectly untouched cosmos for the rest of eternity? Will Starlink immediately create a global utopia by affordably connecting every single human on Earth to the internet, all while being completely invisible and undetectable from the ground? No, no, no, and no. As with 99.99% of things, the reality will fall somewhere in the middle and its consequences and benefits will be far more grey than black and white.

As more levelheaded spaceflight fans and astronomers thankfully point out, we need to wait weeks – if not months or even years – to actually understand the potential impact LEO mega-constellations might have on science and society. It would likely be beneficial for SpaceX – thus far silent – to open a dialogue with those concerned about those potential impacts. It would also serve astronomy well to find ways to cope with space-based infrastructure meant to eventually benefit tens of millions to billions of people, ranging from astronomers themselves to underprivileged members of developing societies. To accept tradeoffs and make compromises is to be human.