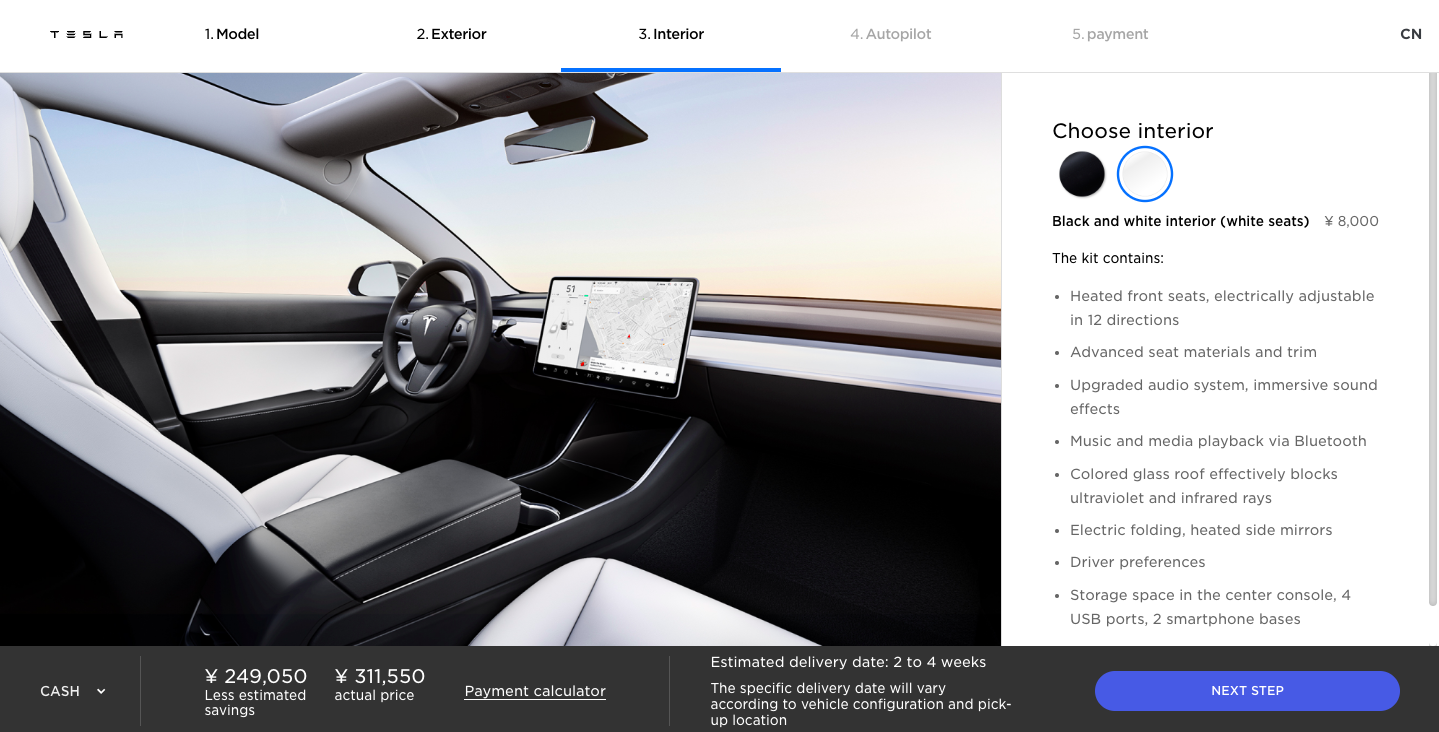 Tesla China has released the white seating option for its Model 3. Previously, the electric sedan was only available with black seats for Chinese buyers.

The Made in China Model 3 has been a hit in the world’s largest automotive market, but customization of the vehicle’s interior has not been available until now. Tesla officially made its white seating option available on April 23. The upgrade costs ¥8,000, or USD 1,132. The price of the upgrade is roughly the same as what’s priced in the U.S. at $1,000.

@Ray4tesla first reported the change on Twitter, who stated many consumers had been patiently waiting for the release of the white seats.

GOOD NEWS: White interior color is what many MIC #Model3 buyers have been waiting for. It’s finally come to China. Now customers are able to order it for ¥8000/$1132. White interior is definitely another Model 3 selling feature. pic.twitter.com/l2TI0XZq8o

Tesla’s addition of the white seats in China certainly adds another selling feature for consumers in the country. The interior option is available for all three of the MIC Model 3 configurations: the Rear-Wheel Drive Standard Range+, the Long Range Rear-Wheel Drive, and the Dual Motor All-Wheel Drive Performance.

When Tesla first released the Model 3 in the United States, the white interior option was only available for the Performance variant of the car. It wasn’t until a year later in July 2018 that the electric automaker made its white interior available to the Dual Motor Long Range configuration of the sedan.

While each vehicle is already exceptionally environmentally friendly and offers a considerable range rating of and high-performance standards, the customization feature could add appeal to buyers who do not like a black interior.

In a bid to make its vehicle’s as environmentally conscious as possible, the company began to use animal-friendly and leather-free material in July 2017. The interior within the Model 3 was officially made “vegan” in September 2019. Vegan meaning none of the seat options are animal-sourced; they are now all made of “Tesla Synthetic Material.”

Tesla’s presence in China has led the automaker to enjoy a considerable amount of success during a trying time. Despite the company shutting down its Giga Shanghai production plant for an extended period following the Chinese New Year because of the COVID-19 pandemic, Tesla has continued to develop into a competitive automaker in the world’s biggest car market.

Tesla’s registration numbers in China skyrocketed from February to March. As the pandemic reduced February’s registrations of the Model 3 down to 2,314, March saw a 450% increase in the vehicle’s bookings. Chinese consumers registered 12,709 Model 3 sedans with the Chinese Department of Transportation in the following month of March.