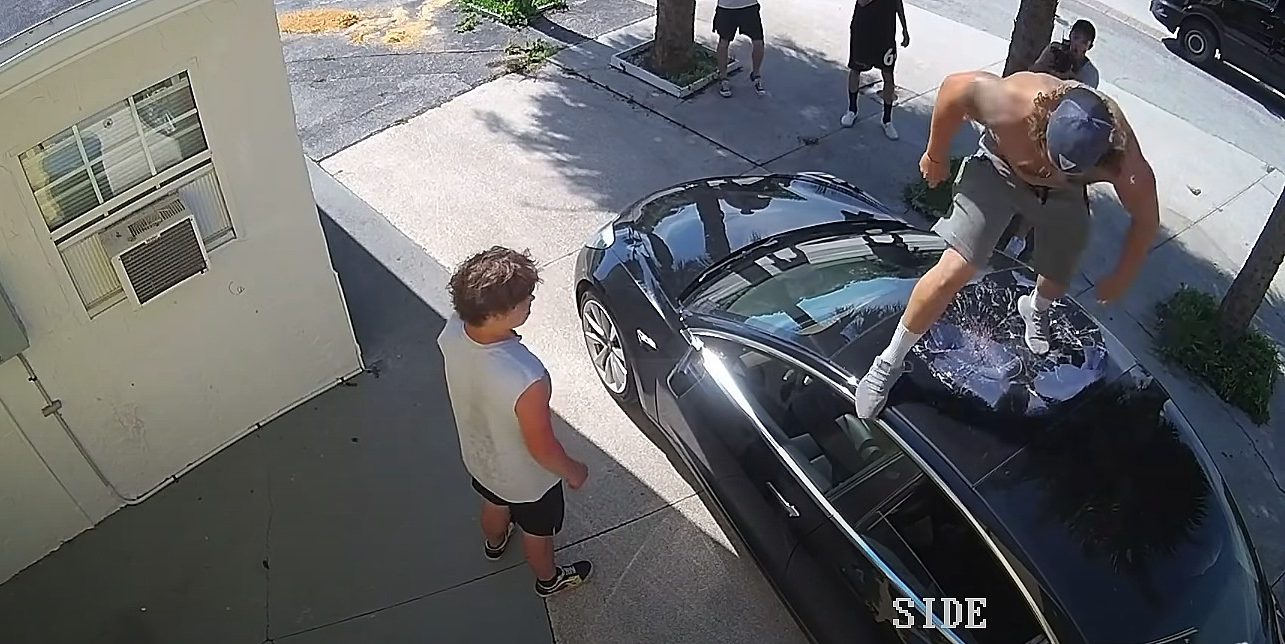 Tesla owners everywhere probably have some things they wish they could change about their cars. Some may want a cloth interior, and some may want to have a more spacious center console. In the case of YouTuber Danny Duncan, he wanted a convertible, so much so, that he chopped the roof off of his Tesla Model 3 after a friend smashed the car’s glass roof.

Duncan is a prominent YouTuber with over 4.55 million subscribers to his satirical comedy channel that consists of stunts and pranks. However, one day in 2020, Duncan decided to take his spontaneity to an entirely new level by making a convertible out of his all-electric sedan.

Although he jokingly claims that he was forced to do it because a friend of his shattered the glass roof, Duncan seemed more than enthusiastic to take his Model 3 to a local fabrication and bodywork facility to make his vehicle unlike any other.

A controversial topic for many owners, damaging any of the company’s vehicles is somewhat of a taboo subject within the community. A recent video that surfaced of someone kicking out a Model 3 dash screen was popular for owners to view, but not for the right reasons.

Damaging a Tesla intentionally has always been a sensitive topic for many of the company’s loyal enthusiasts. But more than that, the vehicles are not inexpensive, and the act of intentionally ruining an electric car manufactured by the Silicon Valley company is sure to get some backlash.

But Duncan’s controversial move was popular among some drivers on the road in Inglewood, California, where he took a drive after receiving his completely modified Model 3.

One pickup truck owner who was driving down the same street as the convertible Model 3 pulled up beside Duncan and complimented the chopped-down EV. “Frickin’ awesome pal,” the man said to the YouTube sensation.

Of course, doing anything like this will void your vehicle’s warranty. Cosmetic damage is explicitly mentioned in the company’s “Parts, Body, & Paint Repair” limited warranty handbook. The document states that the company’s coverage does not include “any damage or malfunction directly or indirectly caused by, due to, or resulting from, normal wear or deterioration, abuse, misuse.” So, Duncan’s hopes of getting a new Tesla from Elon Musk are slim.

Although Tesla has not had a convertible model since its original 2008 Roadster, those who are thirsting to have the fresh air dawn on them from their all-electric vehicle will have to spend a cool $250,000 on the company’s next-gen Roadster. The remake of the company’s original automobile will likely be produced in Fremont at Tesla’s main production facility.

A testament to clickbait culture, Duncan’s modification on his Model 3 is sure to drive some people up a wall. Nobody enjoys seeing a correctly functioning sustainable vehicle go to waste, but Duncan certainly wanted his Model 3 convertible, and he was going to get it in any way he could.

Watch Danny Duncan’s Model 3 convertible video below. Please be advised: there is explicit language, so the video is Not Suitable for Work.