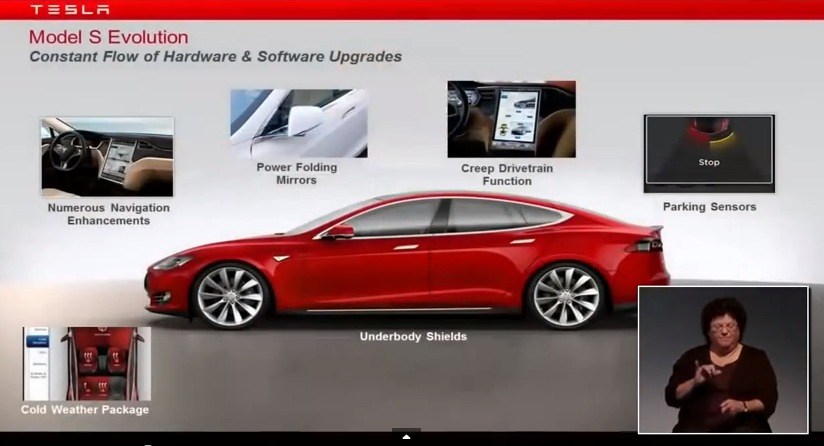 I finally found a chunk of time to sit down and watch Tesla’s 2014 annual shareholder meeting. There’s a lot of information scattered throughout the video, but for this write up I just wanted focus on the hardware and software features that were mentioned by Elon in the video. The features section is fairly short and starts at the 13:07 minute mark and runs through to 15:49.

Elon said that you’ll be able to personalize the car a lot more from from something as little as naming your car within the Tesla portal and app to more advanced personalization through learning behavior. Not a lot of detail was provided around the personalized learning, but he did mention calendar integration and the ability to factor in traffic data and commute times to your scheduled calendar appointments. This sort of sounds like what you get from an iOS or Android device when taking a look at your day view calendar. Traffic optimized directions, re-routing around traffic, alerts for upcoming traffic are also on its way. The intelligence for this is from both a collaborative network of other Model S cars on the road as well as external data sources (he said 20 million other data sources). The Model S network data will be given preference/priority over the other data sources, but it won’t be the only source of data. I sincerely hope that data sources include Google traffic. He compared the collaborative network between the Model S to Waze. There may be possibilities that would allow Model S drivers to interact with one another and collaborate on reporting speed traps, road closures, etc. The traffic re-routing will be a great addition but a more interactive environment between Model S’ really opens up some interesting possibilities for the future.

One flier that Elon threw out at the very end (~1h10min mark) is that he’s confident that within a year you’ll be able to go from highway onramp to highway offramp without touching any controls. Their dates aren’t very believable and its not clear if he’s just talking about the possibility of doing this (Google already can do this sort of thing) or if he meant this would be available in a Tesla product. Either way it will be an exciting next step in the driving experience! It should be no surprise to most Tesla owners that Tesla Motors does not have model years for their cars. Instead they roll out changes as they’re needed. Elon cited several cases of improvements made to the seats and undercarriage (Titanium). In addition to that, he mentioned several new features that were introduced like power folding mirrors and parking sensors. The only real “hardware” upgrade that he made mention of is coming later this year as another seat option. It sounds like the current seats will remain standard and this new seat will be an upgrade option that can be retrofitted into the existing Model S price. I’d expect the new seats to be a significant upgrade, but I’m quite happy with the current ones I have.

There wasn’t a lot of breaking news about features within this shareholder meeting but there were some good clarifications. The collaborative network part between Model S’ was the most exciting and something I hadn’t heard of before. I had assumed they would just use Google traffic. The other items like upgraded seats and a more personalized experience are also interesting.

In terms of a delivery timeline, Elon said it was “rolling out fairly soon” but given their poor history on date estimations, it’s anyones guess when this will be.