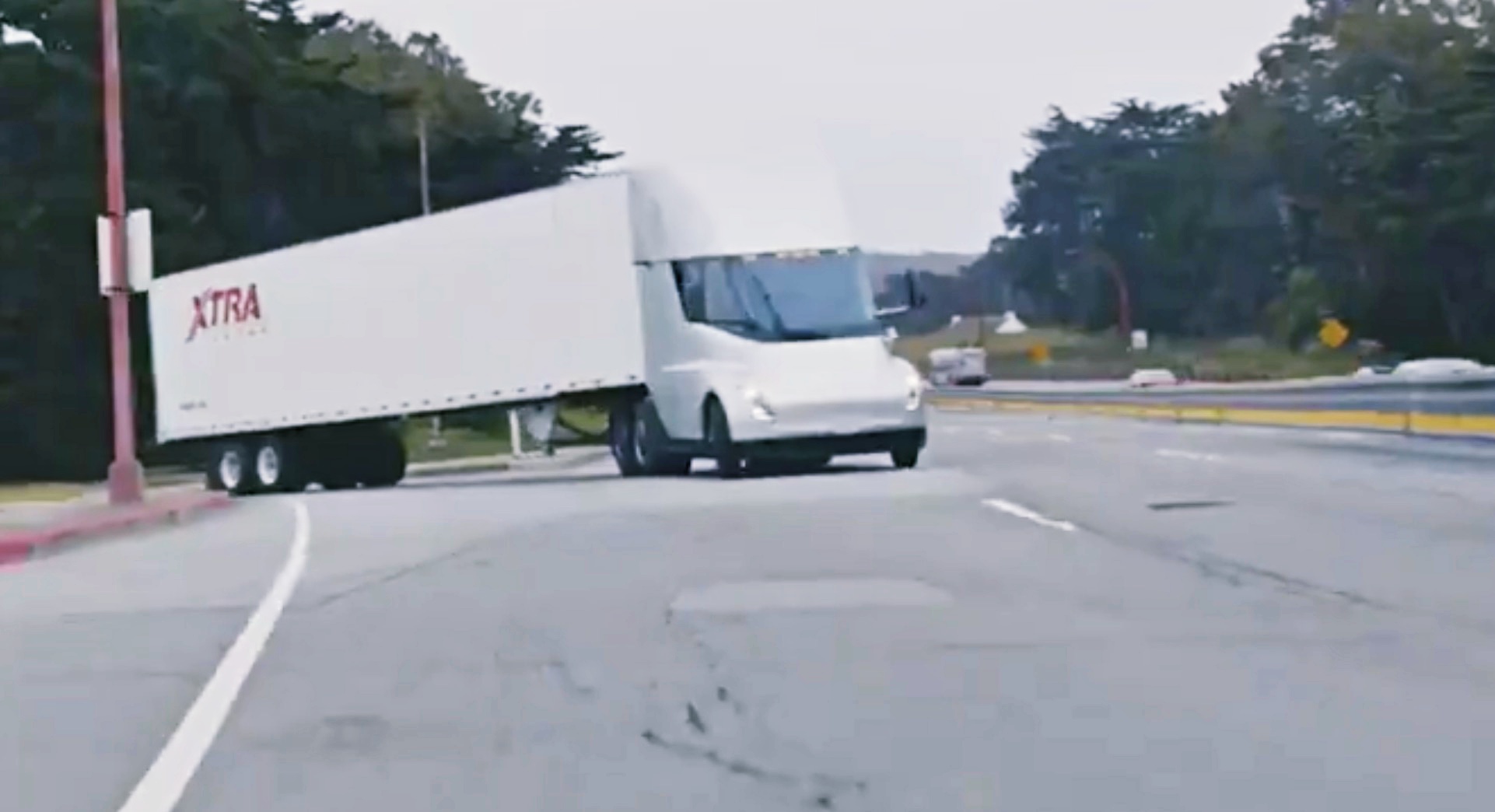 Tesla recently shared a short video clip of the silver Semi stealthily gliding over the Golden Gate Bridge while hauling a trailer on the way to Santa Rosa, CA.

The video clip of the silver Semi, with trailer in tow, was shared on Twitter, where it caused quite a conversation among Tesla’s followers on the platform. Some remarked that the vehicle was unearthly in its silence despite seemingly traveling at near-highway speed. Others jested that the way the Semi glided over the Golden Gate Bridge almost made the vehicle look like a computer-generated image, prompting a lighthearted response from Tesla’s Twitter account assuring that the footage was indeed real.

In a follow-up clip featuring the electric truck heading to the Golden Gate Bridge, the logo of Xtra Lease Trailers was visible on the Semi’s cargo, suggesting that Tesla could be a client of the leasing company. Xtra Lease Trailers, a Berkshire Hathaway Company based on St. Louis, MO, is among the United States’ most prolific trailer lease providers, with a fleet of 85,000 trailers to date.

A Tesla fan has also shared an image of the Semi on Twitter just as it was about to enter the Golden Gate Bridge. Just like in recent sightings, such as the one near the LA Service Center — a place that holds historical significance to the company.

Here's the @TeslaSemi about to cross the Golden Gate bridge pic.twitter.com/EYR23Zewpy

While the Elon Musk-led company did not specify the purpose of the Semi’s trip to Santa Rosa on its Twitter video, Tesla’s VP of Truck Programs Jerome Guillen noted in his LinkedIn profile that the footage was taken last week, and that the trip was conducted to visit “some great local customers.”

Guillen and the team currently testing the Tesla Semi have been spotted in several areas of the United States, especially in the route between the company’s Fremont, CA factory and the Sparks, NV Gigafactory. As stated by Elon Musk earlier this year, Tesla is now using the two electric trucks as part of its fleet tasked with transporting Model 3 battery packs from Gigafactory 1 to Fremont. The two massive electric vehicles have also been spotted in the route between Tesla’s headquarters in Palo Alto, CA and the Fremont.

The Tesla Semi has been well-received by several prolific transport and trucking companies, both in the United States and abroad. During the company’s Q1 2018 earnings call, Tesla CEO Elon Musk and CTO JB Straubel noted that there are roughly 2,000 reservations for the electric long-hauler to date. So far, companies that have publicly announced their orders for the vehicle include companies such as PepsiCo, FedEx, and UPS in the United States and Bee’ah from the United Arab Emirates.

Over the past few months, the Tesla Semi has also been spotted visiting the site of several key reservation holders, such as Anheuser-Busch in St. Louis, MO. The electric truck was also demoed for PepsiCo employees in Dallas, TX. The black Tesla Semi, speculated to be the short-range variant of the vehicle, was also spotted being transported at a highway near Des Moines, IA, close to the headquarters of Ruan Transportation Management Systems, another one of the Semi’s reservation holders.

Some companies with reservations for the Tesla Semi are currently working with Tesla to set up a charging network for the massive long-haulers. Dubbed as the Megachargers, the Tesla Semi charging stations will be installed at key locations that are frequently traveled by fleet operators. This would enable truck drivers to travel between facilities without having to recharge each time they load and unload cargo.