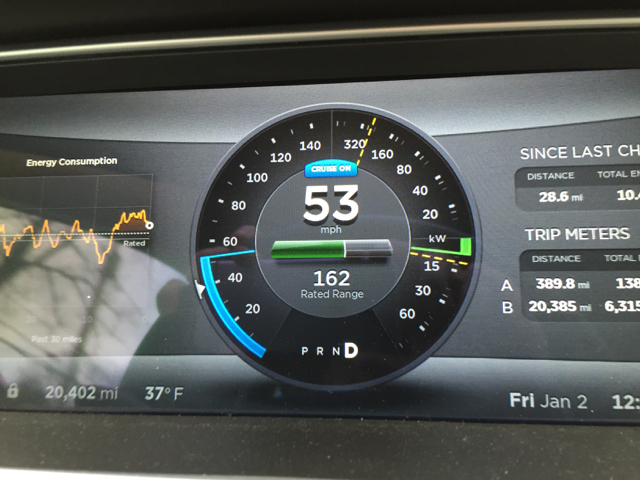 I use cruise control a lot when driving. Highways, back roads, you name it. My main motive for using cruise control as much as I do is to avoid the urge to speed. After all, it’s far too easy to speed in the Model S with its smooth instant acceleration and lack of engine noise.

I did a fairly detailed review of the Model cruise control system back in the spring of 2014 but it turns out there’s more to the story than I originally thought. The frigid New England temperatures have affected battery range and the ability to use regenerative braking but little did I know that it would also affect the cruise control system.

In most ICE cars, cruise control will not apply the brakes but will leave the car in gear allowing the vacuum of the engine and engine braking to slow the car down. Some cars will also downshift to further increase engine braking as a means of slowing the vehicle.

The Model S on the other hand has no engine or transmission that can be used for engine braking. Because of this the Model S cruise control system relies strictly on the effects of regenerative braking to slow the car down. When regenerative braking is limited, the rate in which the vehicle decelerates is also limited which in turn limits the ability for the vehicle to automatically slow down. In the image above, I had cruise control set at 40MPH but because of the limited regenerative braking due to cold weather combined with a down hill decent, the Model S ended up plowing right past the 40 MPH mark as gravity took hold of the car. I ended up speeding 13 MPH over the cruise control  speed.

Model S owners get to choose between standard and low regenerative braking but it doesn’t make that much of a difference during cold weather conditions since regen as a whole will be limited.

There is Tesla Life Outside of California

Some California Tesla friends were surprised that I was concerned about this winter quirk. Their thought was that the Model S would operate normally after a short warm up period and this issue shouldn’t be considered a big deal. They suggested I accelerate hard a few times to get the vehicle back to “normal” temperatures but that’s easier said than done when you’re dealing with winter road conditions. Warming 7,000 battery cells up to optimal operating temperatures takes time. Here in New England with temperatures well below the 40’s, it often takes 45 minutes of highway driving before regen kicks back in and can accept over 30kW. But more often than not I’m driving without regenerative braking because of the cold weather.

30kW of regenerative braking is needed for slowing the car down. Anything less and the car begins to gain speed as it begins to roll downhill. How fast it gains speed really depends on how limited the regen is.

If you live in colder climates and use cruise control on your Model S, beware of this winter quirk or run the risk of picking up a hefty speeding ticket.