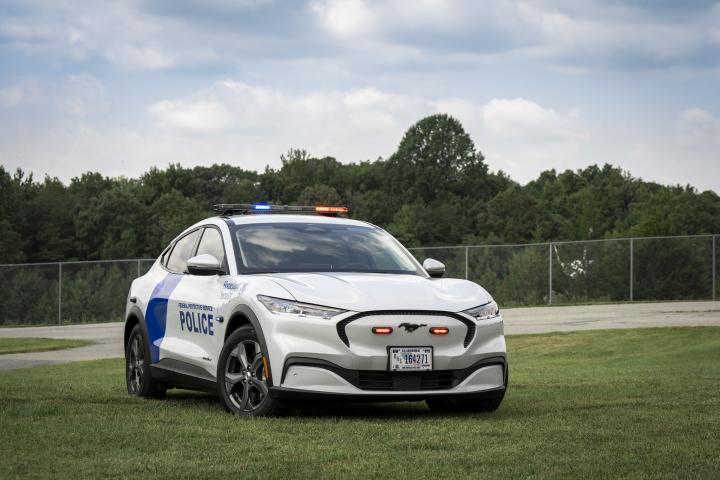 Ford Mustang Mach-E to be used by Homeland Security

Cheltenham, MD (September 15, 2022) Homeland Security Deputy Secretary John Tien participates in the rollout of the Ford Mach-E for use by the Department of Homeland Security. During the rollout, the Deputy Secretary test drove the vehicle, as well as participated in an operational tour and employee engagement at the Federal Law Enforcement Training Center at Cheltenham, Maryland. (DHS Photo by Tia Dufour)

The Department of Homeland Security has unveiled its new electric vehicle platform, the Ford Mustang Mach-E.

Ford has long dominated the law enforcement vehicle market. Nothing has been more synonymous with a sinking fear on the highway and quick glances at your speedometer than Ford Crown Victorias and, more recently, Ford Explorers and Ford Tauruses. Now, the U.S’s largest law enforcement agency, the Department of Homeland Security (DHS), is adopting the Ford Mustang Mach-E.

Believe it or not, the DHS is not only the largest law enforcement agency in the U.S. but also the third largest agency overall, maintaining a 50,000-vehicle fleet. As the agency looks to cut costs and reduce its CO2 emissions, electric vehicles are starting to be adopted by the agency.

Before the Ford Mustang Mach-E, or any EV for that matter, can be fully implemented into the DHS, it must first undergo serious testing by the Federal Protective Service. The FPS will test the vehicle’s performance on and offroad, its durability, and even its cyber defenses to ensure that it is up to the task of being the DHS service vehicle.

This is not to say the Ford Mustang Mach-E is the only electric option for law enforcement; far from it. Numerous local police agencies have chosen to use Tesla Model Ys for their enforcement needs, while others have opted for another Ford product, The Ford F-150 Lightning. As other brands begin to expand their offerings to the public, there is no doubt that law enforcement options will grow as well.

Dodge has long been a competitor of Ford in the law enforcement market, and with their upcoming Dodge Ram Revolution electric truck being unveiled in November, yet another EV truck may come to law enforcement agencies in the U.S..

Ford Mustang Mach-E to be used by Homeland Security