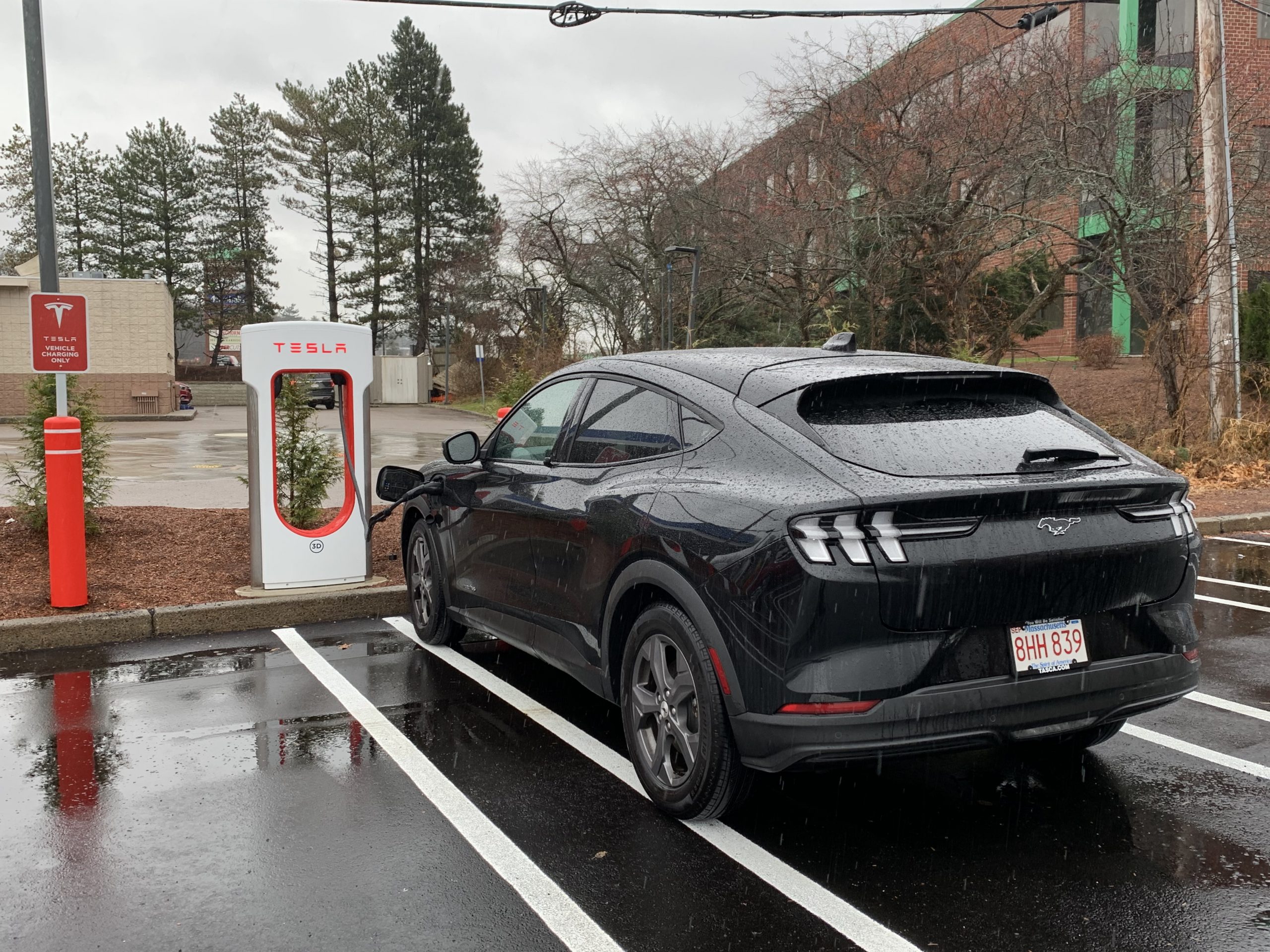 Update: The Ford Mustang Mach-E is not being charged, as the adapter being used is not compatible with Supercharging, only Destination Chargers.

A Ford Mustang Mach-E appeared to be successfully charging at a Tesla Supercharger in Franklin, Massachusetts, over the weekend. While Tesla Superchargers are not wholly available to other EVs, a few forgotten Tweets from CEO Elon Musk remind us that the automaker may be quietly allowing competing companies to utilize the largest electric vehicle charging network in the world.

The video was sent to Teslarati by a reader and Boston-area Model 3 owner, who sent the clip of a Mustang Mach-E utilizing a Tesla Supercharger in the New England region of the U.S. The Supercharger in Franklin, Massachusetts is brand new, Ted said, and is not currently listed as an active charging point on Tesla’s Supercharging Map. However, it is up-and-running, and it is apparently giving more than just Tesla’s EVs a charge.

However, this is not the case with the Mustang Mach-E, as the indicator light located to the right of the charging port is fully illuminated, revealing that the Mach-E has a full state of charge. If the Mach-E were not charging but still plugged in, it would flash and blink red or remain solid red, indicating that the vehicle is encountering a charging error, according to the Mustang Mach-E owner’s manual.

Tesla has not yet opened its Supercharger network to the general population of EVs in the United States. However, CEO Elon Musk said in late 2020 that Tesla does have Superchargers that are available to other EV owners, but it’s “low-key.” Musk continued by stating “Tesla Superchargers are being made accessible to other electric cars.”

They are, although it’s kind low-key. Tesla Superchargers are being made accessible to other electric cars.

Musk also stated in July that Tesla was “making our Supercharger network open to other EVs later this year.” With only eighteen days left in the year, it is likely that Tesla has started opening the network to other vehicles, and it could be confined to newly-opened Supercharging stations.

However, there is the possibility that there is a software bug that is allowing this to happen. In September 2020, some EV owners in Germany were able to utilize Tesla Superchargers through a software bug. It allowed eight European EVs to use the Supercharger network.

Tesla also has plans to open its Supercharger network to other vehicles in Europe. The pilot program for the Supercharging program started in the Netherlands in November.