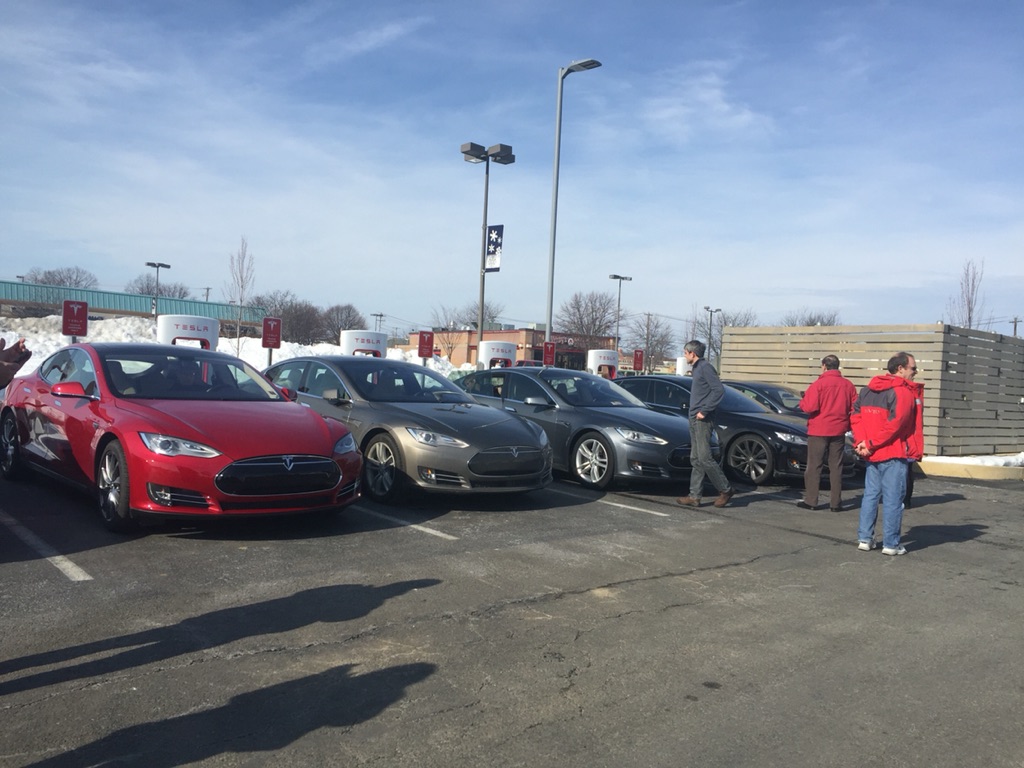 With every new Supercharger location that comes online, a certain population of people can no longer say a Tesla can’t get them from A to B. For some current, future and perspective Tesla owners, there is one particular trip they make regularly that can not be done in their Model S. I would wager that most of these people have one specific Supercharger location in mind – whether they came up with it themselves or it is on Tesla’s own charging map as planned for some day – that if built, would be the key to their trip. For me, that location is Allentown, PA. As I mentioned in my post about Giving Thanks to the Tesla Village, this particular location was intended to be built in 2014. As a yet unwise future owner, I truly believed the showroom employees and delivery team I worked with were correct in saying that location would be completed in time. Our car was set to be delivered some time in November or December of 2014, so we worried not about getting to our parents’ home in the Northeastern corner of PA for the holidays. Traveling round-trip from the Southeastern corner of PA, up and over mountains in the cold, would not be possible without a Supercharger en route or a reasonable destination charging option. (They have no driveway or garage, and the nearest L2 charger is a 15 minute drive to an adjacent town.)

Watching the “dot” on Tesla’s map move from 2014 to 2015 and learning that the original location at the Lehigh Valley Mall ran into reportedly insurmountable obstacles was very disappointing. As if owning such a grand car isn’t embarrassing enough, asking for a ride to drop off and pick up said car because you can’t make it home without charging really made me feel awkward. (Thank you Mom, Dad and little bro for being a team player for an entire year!)

The wait started getting a little ridiculous, so I searched and inquired for any tidbits of information that would bring good news about a charger. Finally, after what seemed to be an eternity, a new site was selected. The new township would have to have a zoning board meeting to determine how to categorize the space. (Parking vs. fueling.) They likened the need to vote with a time, years ago, when someone asked to build a cell tower there. The township just had no way to classify it yet.

Something told me that driving over an hour to attend this zoning board meeting was crazy, so instead I reached out to a local reporter and asked for updates. She happily obliged but unhappily gave me the bad news: the zoning board couldn’t vote due to some procedural snafu. That one month delay gave me a bad premonition that the charger would not be installed in time for the cold weather or our Thanksgiving trip.

“You see, one single charging location can mean the world to some people”

I was right, unfortunately, but still had hopes for Christmas. That too came and went, as did we, to and from that level 2 charger 15 minutes away. I visited the site while in construction and heard of others doing the same. One claimed a construction worker said they were trying to be done by the end of the year. Of course, done to them does not mean done to us, as testing and electrification requirements must be met before a charger officially opens.

Then one day it happened. On January 21, 2016, a TMC forum member that goes by the name 55 Sux successfully plugged in and took pictures to share the news. Just as soon as the news came out, various members rejoiced. Undoubtedly, others who travel within, to, from or across Eastern Pennsylvania but do not participate in forums rejoiced as well. So too did those hoping to be able to take their Model S to a ski trip at one of PA’s many resorts near or north of Allentown this year.

But don’t take my word for it, just look at how many owners breathed a sigh of relief and beamed a smile after getting to use their much awaited Allentown, PA Supercharger location. (Note: This unofficial ribbon cutting ceremony brought out curious onlookers that surely recognized how important these funny shaped charging stations were to us.)