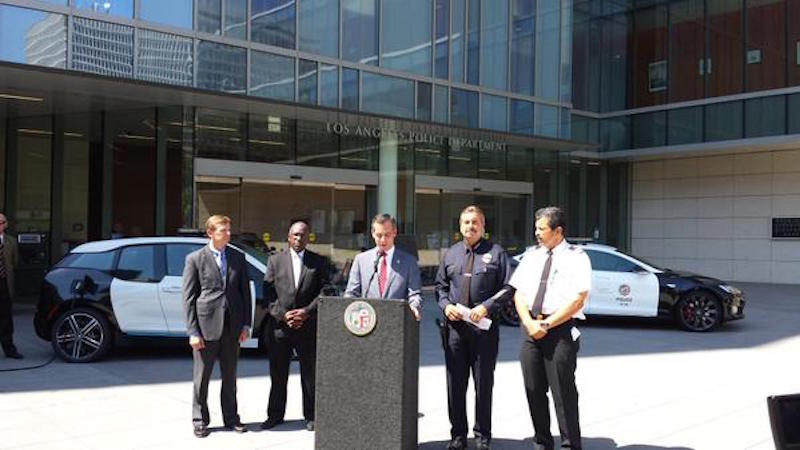 Los Angeles mayor Eric Garcetti made the announcement today that the city will be leasing 160 pure battery electric vehicles and 128 plug-in hybrids as part of a continued initiative to adopt green technologies.

Augmenting the city’s existing fleet of vehicles will be the dual-motor Tesla P85D and the BMW i3.

“Today, we take another step toward becoming the most sustainable city in America,” the mayor told reporters. “This year, Los Angeles will become home to the largest city-owned fleet of pure battery electric vehicles anywhere in the country, and we will save taxpayer dollars along the way.”

The mayor’s announcement comes on the eve of the U.S.-China Climate Leaders Summit to be hosted in L.A. on Sept. 15-16.

The movement to adopt cleaner technologies is part of a larger set of targets to reduce greenhouse gas emissions by 80% by 2050, increase local water supplies to 50% by 2035, and reduce water use city-wide 20% by 2017.

According to a posting on the LAPD Blog, the Tesla Model S P85D and a BMW i3 will be used will be used for testing and research by LAPD technical experts to determine how this technology can support their future needs.