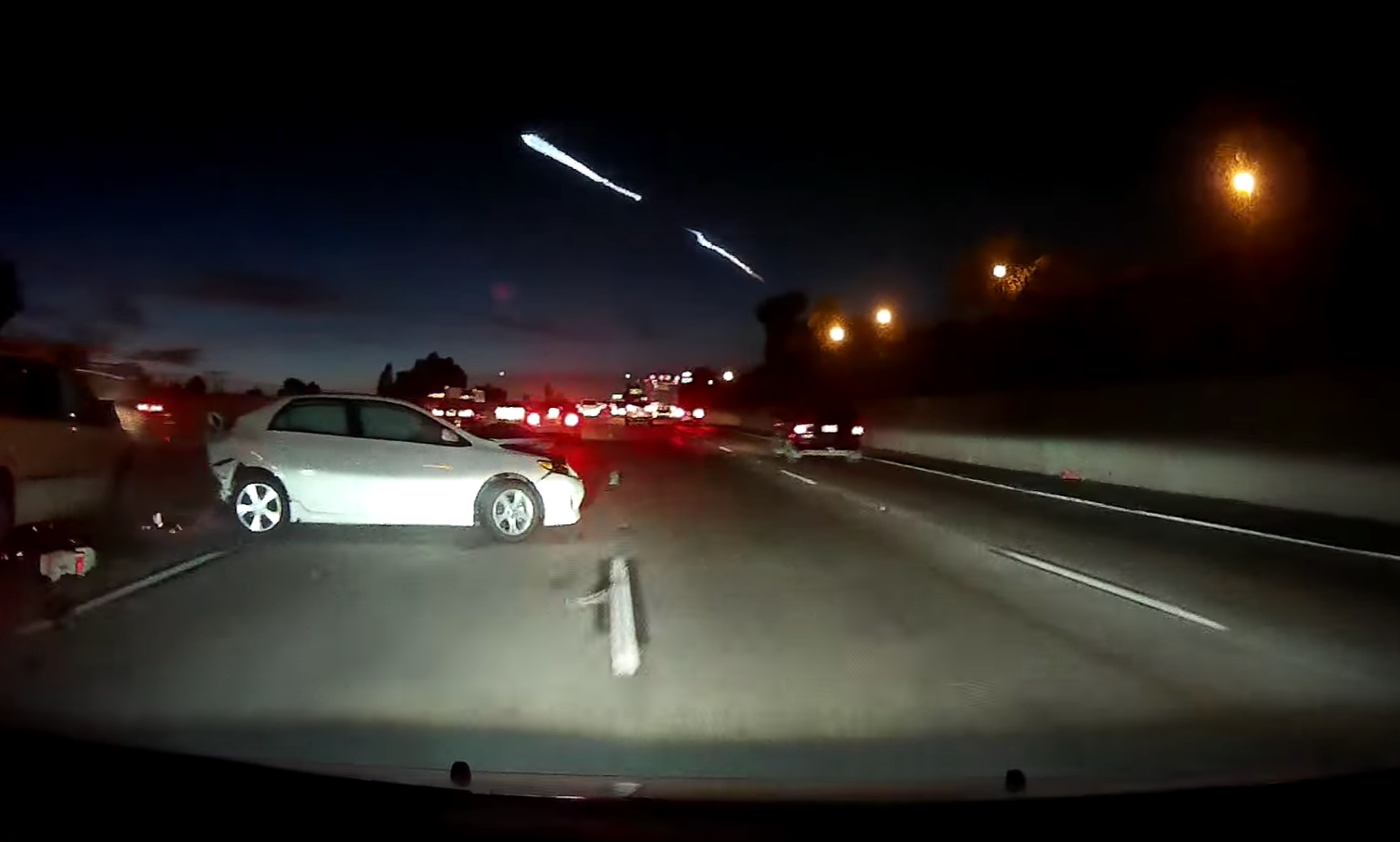 SpaceX’s last Falcon 9 launch of 2017, which carried yet another batch of Iridium satellites into space, was particularly stunning. The launch was so visually spectacular, in fact, that it ultimately caused a three-car pileup on Interstate 10 in Beaumont, located roughly 80 miles east of Los Angeles.

The incident was caught on tape and shared on YouTube by Mark Sales, who was traveling on the highway with his family. In a dashcam video recording of the incident, Sales and his family could be heard excitedly talking about the aerial display, with people in the vehicle audibly wondering what it could be.

As could be seen in the video, several drivers on the highway seemed to have gotten transfixed by the event. Not long after, a mid-sized SUV braked suddenly, causing a compact sedan to slam on its brakes as well. Unfortunately, a crossover SUV was not able to slow down on time, causing it to violently slam into the sedan, which in turn crashed into the mid-sized SUV.

The impact from the accident was so violent that the compact sedan was totaled and thrown across the road and into another lane. The mid-sized SUV was also pushed to the curb due to the impact. Details about the crash remain unknown, however, as Sales opted to move along after the incident, seemingly as a way to prevent a possible traffic jam.

Rocket launches are always quite the spectacle, and SpaceX, which conducts missions fairly frequently, has managed to freak people out on more than one occasion. The aerial displays that ensue after that the launch of the private space firm’s rockets, for one, have managed to consistently grab the attention of people from all walks of life, from random bystanders to dedicated UFO enthusiasts.

Last Friday’s mission, however, was a little bit special. Due to the launch occurring around 30 minutes after the sunset, the exhaust plume of the spacecraft was illuminated at high altitude by the sun, resulting in an aerial display that could only be described as atmospheric art. The trails left by the Falcon 9 rocket were so prominent in the sky; even Hollywood stars took to Twitter to excitedly discuss the event, as noted in a Vanity Fair report.

Unsurprisingly, the spectacle also attracted several alien enthusiasts, many of which speculated on possible UFO sightings. True to form, SpaceX CEO Elon Musk decided to add a little joke to the ongoing discussions, stating that the lights in the sky were definitely caused by aliens.

It was definitely aliens

Considering that SpaceX is preparing to launch the “world’s most powerful rocket” that will be carrying Musk’s personal Tesla Roadster into space, there is a pretty good chance that the trails it would leave in the sky would be even more prominent than the ones left by its smaller Falcon 9 siblings. In order to prevent a similar accident from happening, SpaceX would need to thoroughly warn everyone in the area about the massive rocket’s launch. Otherwise, more fun discussions about aliens, and other non-fun road incidents, might happen once more.