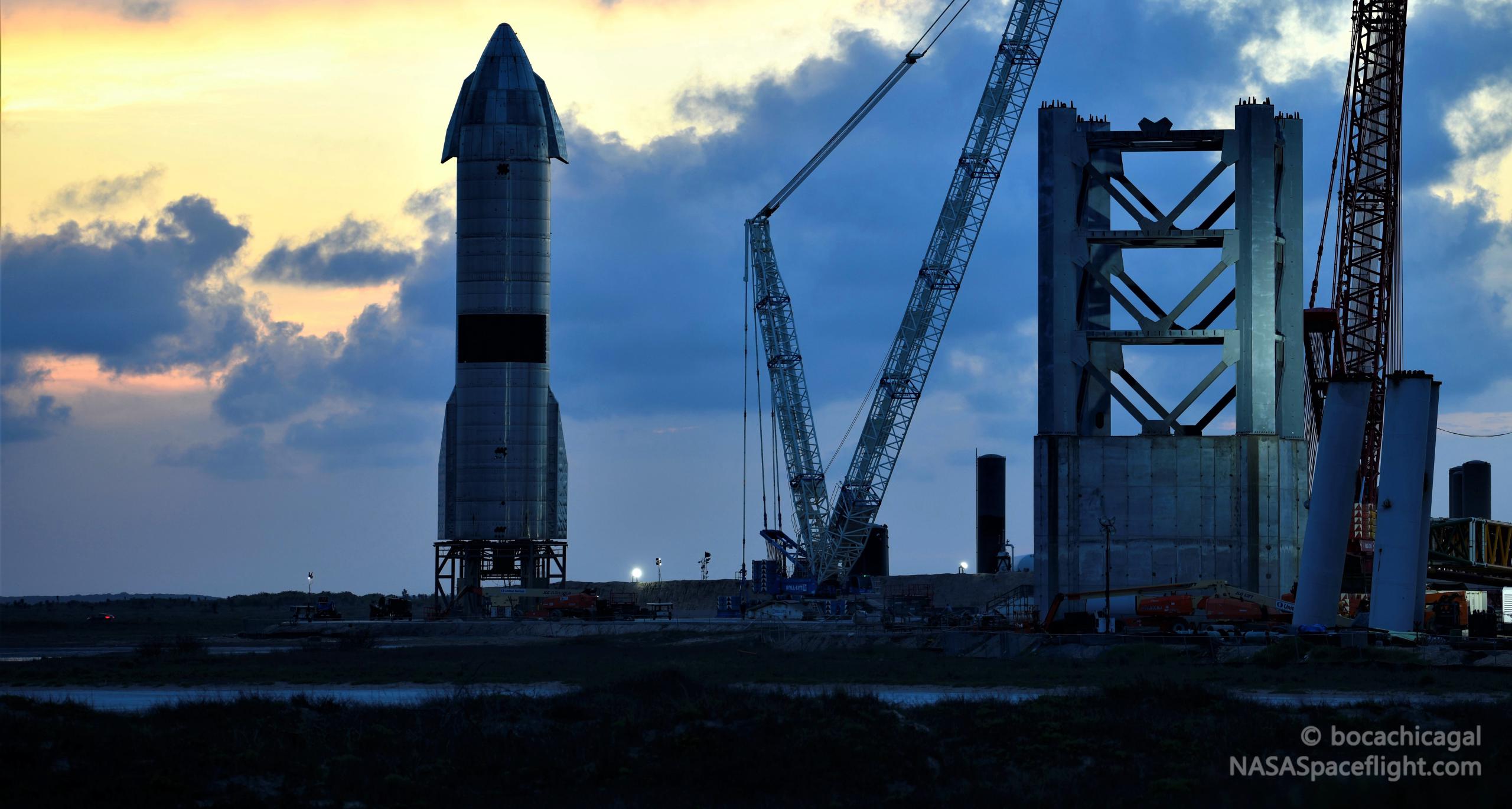 Nine days after this spectacular landing, SpaceX has installed Starship SN15 on a second launch mount to prepare for a possible reuse. (SpaceX)

Nine days after becoming the first full-size prototype to survive a high-altitude launch and landing, SpaceX has installed Starship SN15 at the second of two identical launch mounts to prepare for potential reuse.

On May 5th, after a week or two of several minor delays, Starship SN15 – the fifth full-size prototype of its kind – lifted off from SpaceX’s Boca Chica, Texas launch pad under the thrust of three Raptor engines. Like all four of its predecessors, the 50-meter-tall (165 ft) steel rocket easily ascended to an apogee greater than 10 km (6.2 mi), shutting down one Raptor every ~90 seconds to its keep velocity low. When the final engine cut off, SN15 arced over onto its belly and free-fell to around half a kilometer above the ground, using four hollow steel ‘flaps’ to control its orientation like a skydiver’s limbs.

The most radical maneuver came around six minutes after liftoff when the sideways Starship reignited two or three of its Raptors, aggressively flipped into a nose-up position, deployed six stubby landing legs, and gently touched down a few hundred feet east of the stand it took off from.

Despite a fairly large fire that burned for several minutes after touchdown, SpaceX ultimately found itself – for the first time ever – with a full-size Starship prototype that survived its inaugural ~10-km launch and landing. A careful process of safing and securing then followed as operators commanded (or monitored) SN15 to disarm explosive flight termination system (FTS) charges, vent any remaining propellant, and eventually depressurize its fuel and oxygen tanks.

Unlike Starhopper, SN5, and SN6 – which also survived flights – SpaceX was apparently able to safe SN15 without any real issues and recovery teams were able to approach the rocket within a few hours of landing instead of the 12-24+ hours that were normal prior. SpaceX also debuted a sort of supersized version of the ‘Octagrabber’ robots that remotely secure Falcon boosters after drone ship landings, allowing the recovery team to secure Starship SN15 to a stable platform and transporter without a crane.

No longer at risk of toppling over, Starship SN15 then… sat where it landed. Less than two days after touchdown, CEO Elon Musk unexpectedly revealed that SpaceX “might try to refly SN15 soon,” indicating that initial post-flight inspections had revealed that the first flight-proven three-engine Starship was in excellent condition. SN15 would ultimately spend another four days (six total) sitting on a transporter at the landing zone. On May 11th, SpaceX rolled Starship SN15 from its landing spot to “Pad B” – the second of two identical suborbital launch mounts.

Perhaps due to stormy weather and high wind gusts in the area, SN15 once again sat still – this time for another three days. Ultimately, the Starship prototype was rapidly lifted onto Pad B’s launch mount, secured, and detached from the crane in a matter of hours of May 14th – possibly the smoothest pad installation yet. In the two days since then, SpaceX has begun more in-depth inspections that will ultimately determine whether the first flight-proven Starship is truly fit for a second launch.

That process likely wont take more than a few days and even if SN15 isn’t deemed (re)flightworthy, there’s still a very good chance SpaceX will put the Starship through some kind of test(s) before it’s retired. Stay tuned for more details likely to come this week.