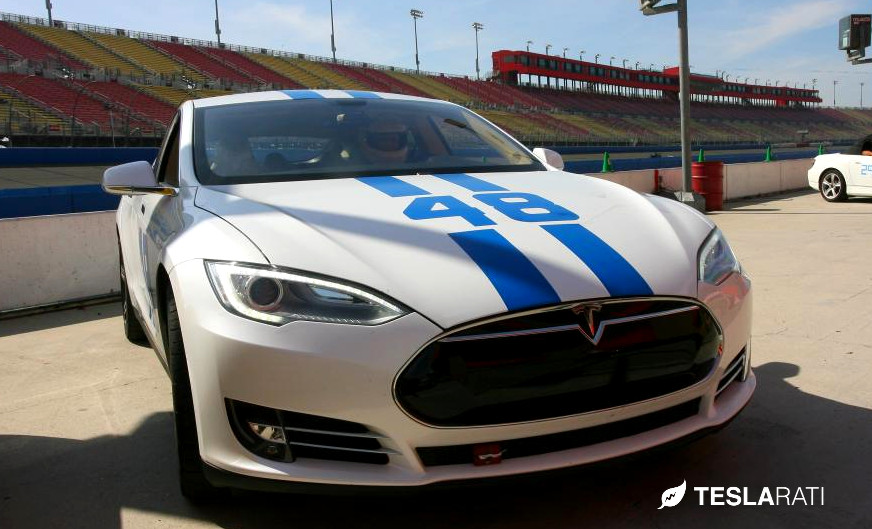 Buttonwillow Raceway in Bakersfield, CA is a 3.1 mile long road course that looks deceptively simple to drive, but requires the utmost precision to master.  We’ve never seen as many cars spin out and lose control as we have at Buttonwillow. This track really shines a light on Tesla’s advanced stability control system as we were was one of few cars that managed to stay firmly planted on the track. As you’ll see towards the later half of the video, some of the other cars really struggled with staying on course. We saw at least one car every other lap sliding off the course.

It was the first time we’ve run at Buttonwillow Raceway so we greatly underestimated the complexity of the track.  Without Tesla’s superb stability control we would have probably spun off the track a number of times.

The car pulls like a thoroughbred racehorse out of the gate and out accelerates most of the cars on the track – even a Porsche 911 Carrera as noted in the video. Power limiting on the Model S, as a result of the car’s ability to self-cool the battery system, eventually activates sometime around the second lap, of a 3.1 mile course. That being said, you’ll have a fairly short amount of time to compete at full power and get your best lap times in.

Being a fairly technical track, it won’t excite with high speeds, but there is a great deal of satisfaction to be had when you master a turn. For us it was being able to finally master the blind right that’s cresting a hill also known as “Phil Hill”.  What a rewarding experience that was!

When fine grained dirt off the shoulders gets blown onto the track, the effect are large dust clouds that linger on the course and completely limit driver visibility. Unless you’re certain there is no one on the other side, do not drive through it at speed.

The track has a number of 240V outlets at designated RV spots. They are not free and cost about $20 per day. We found that some of the outlets provided a charge at 30 amps while others didn’t work at all.

The Tejon Ranch SuperCharger is 50 miles away.

It’s a technical track and perfect for the Model S even in the standard configuration. The only detriment to the racing experience is that the power limitation starts kicking in after a couple of laps.

Want to know more?  Leave us a comment below!