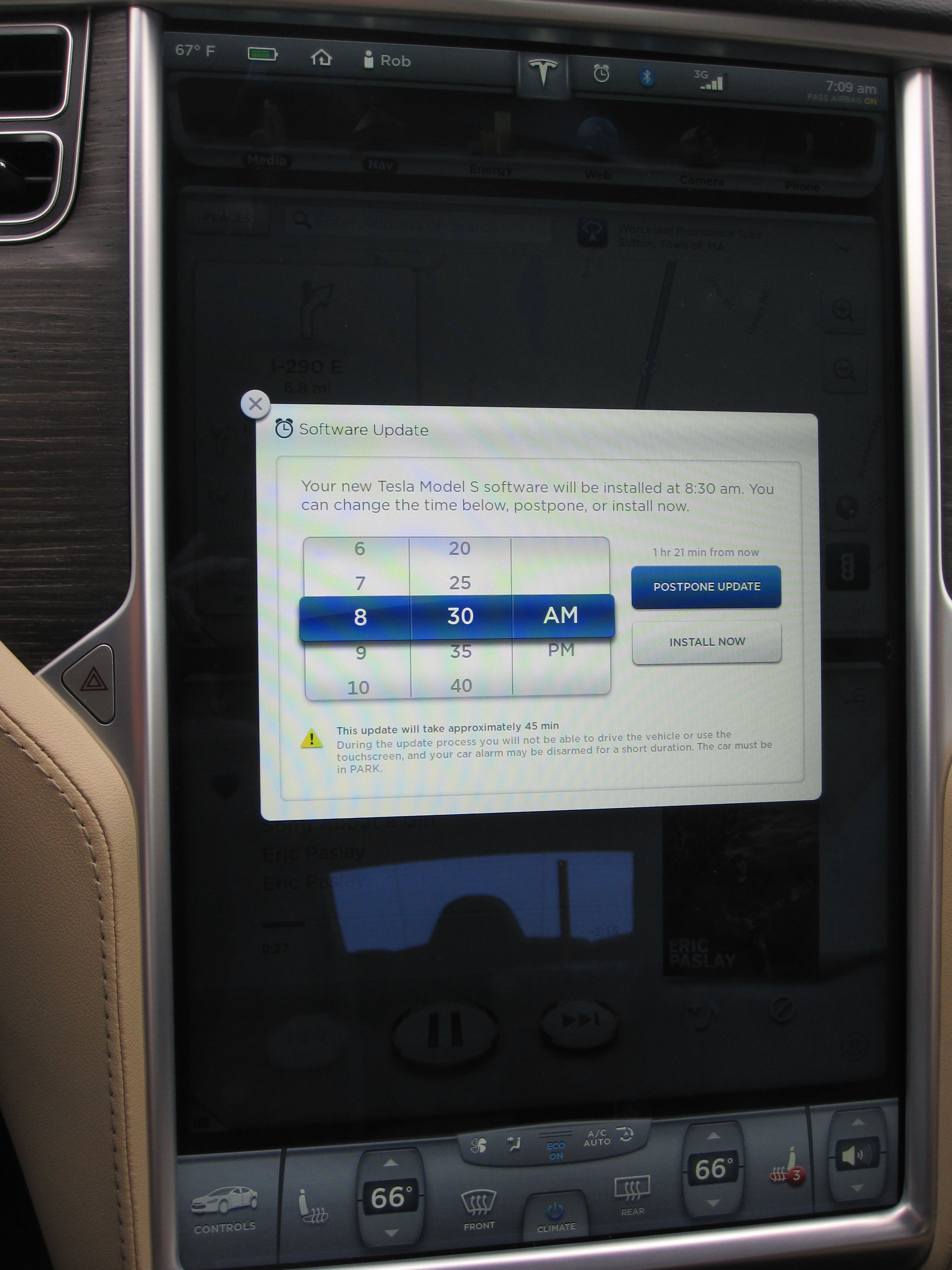 How Does a Tesla Over-the-Air Software Update Work? Perhaps only geeks appreciate this, but I was excited the other day to see a Tesla over-the-air software update notification pop up on my Model S. Software updates typically consist of minor fixes and tweaks but will sometimes include new and exciting functionality. Tesla is no different. In a past article, we took a look at Tesla’s frequency of software updates and their contents, but this post will focus on the actual update process.

An icon on the center touchscreen appears a new software update becomes available. Other than indicating availability of the software update, it doesn’t provide any details on what the update is about until after the installation.

Not everyone gets notified of an available update at the same time. However there are rumors that those with wifi connections tend to get updates faster than those relying only on a 3G connection.

If you dismiss the notification you can make it reappear by pressing the Tesla logo at the top center of the 17″ touchscreen. Otherwise you can start the install or schedule it to auto install at a later time.

The car must be in park mode for the update to get applied which can take upwards of 45 minutes to install.

This was my first time experiencing a Tesla over-the-air software update so I decided to schedule the install 5 minutes in the future so I can watch the entire process.

Once scheduled, a new clock icon appears at the top of the 17″ screen. Clicking on it brings you back to the scheduling options for the software update but otherwise it will just remind you that scheduling has already taken place. A countdown notifies you that the Model S is about to install a software update. The ability to cancel the update is present, but once you run out of the countdown, the update will begin. And that’s about it for up to 45 minutes.

Most people would walk away at this point, but the engineer in me couldn’t do that so I sat in the car for the entire update.

Your Model S will likely do things you didn’t know it could do. It’s going to make sounds, flash lights, spin fans, gurgle and do all sorts of other scary things. By the way, did you know your glove box button is lit?

There are a lot of components in a Model S. According to TeslaTap, there are 432 lights, 50 motors/solenoids, 52 processors and a host of other complex machinery in the Model S. Each component is controlled through software and thus paired with a test program.

The whole experience was kind of disturbing and I’m not sure I’d sit through another. At one point in the process the dash read this:

Although I was thinking “Uh oh, I bricked my $100K car!” Rather than hopping on the phone with Tesla, I waited it out. After 22 minutes of more frightening behavior including lost temperature readings, mismatched clocks on dash vs 17″ display, the sound of brakes tightening, and other exciting things, the touchscreen told me the update was successful.

I lived through the Tesla over-the-air software update. I had previously been on version 5.9 (1.51.94) and was expecting to see version 5.11 but was disappointed to see the same 5.9 release notes when the update completed. Same minor release as before but just a few builds later.

I have no idea what Tesla did to my car since the release notes were identical between what I had and what I just got. I can’t say that I’ve noticed anything different since the update but I assume something was fixed or improved. I make sure my Model S is on wifi at all times (whenever possible) just to ensure I don’t miss my chance at getting an early Tesla over-the-air software update!

How Does a Tesla Over-the-Air Software Update Work?