Tesla fan clones perfect Cybertruck but with one flaw

Tesla Cybertruck clone trailed by a Model X and Model 3. (Credit: Instagram | @268_others)

A Tesla Cybertruck fan has made one of the best clones to the all-electric pickup yet. However, there is one problem with his Cybertruck lookalike: it isn’t electric, it’s gas-powered.

The Cybertruck has not been released yet. Still, a Tesla enthusiast could have some people wondering if the unique pickup is randomly rolling around the streets ahead of its first deliveries, as he went the extra mile to create arguably the best Cybertruck clone yet.

Someone known simply as “Jim” on Instagram has created what is perhaps the most realistic and accurate portrayal of the Tesla Cybertruck yet. The clone, both with its interior and exterior, seems to share all of the same qualities as the real Cybertruck that Tesla unveiled in late November.

Based on pictures and videos, it appears to be extremely close to what Tesla rolled out on stage in Hawthorne at the company’s unveiling event.

However, “Jim” admitted that his Cybertruck clone is not powered by batteries or all-electric motors. Instead, the clone is powered by gas, which makes it as far away from a Tesla clone as one could get. Even though “Jim’s” Cybertruck may look like the real thing, it is powered by the opposite of what Tesla would use for any of its vehicles.

Many people have tried to build the Cybertruck themselves all over the world. The unique design of Tesla’s first all-electric pickup truck caught the world by storm because of its compelling shape and stainless steel exoskeleton, so much so that many have tried to replicate the car in their own garages.

While those who have strived to clone the electric pickup have done an excellent job in their own right, Jim’s seems to be the most accurate depiction thus far when it comes to aesthetics.

Not only does the car have an external look and what appears to be the correct dimensions of the real Cybertruck, but the interior detail is what is perhaps the most striking. It seems that Jim has done an incredible job with bringing the interior look to life, even including the “marble” dashboard, which is actually made of recycled paper composite materials.

Tesla used paper composite materials for the dashboard, which are cost-effective and provide a luxury look. The electric car company has focused on using environmentally friendly materials for the interior of their cars, starting with vegan interiors back in 2017.

The clone Cybertruck also has the same steering wheel, seat layout, large glass roof, and a similar dash screen to the real vehicle. 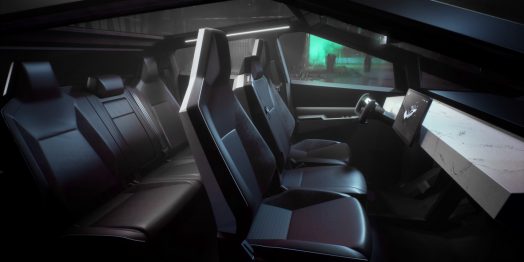 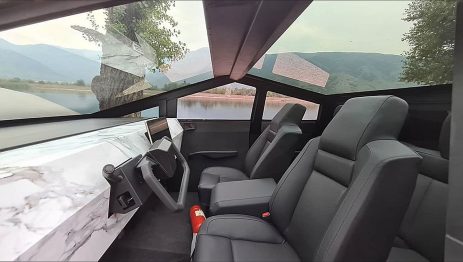 Elon Musk has stated on several occasions that Tesla is working on modifying the Cybertruck to make it as high-quality as possible. Not only did the electric car company consider making the vehicle smaller and more compact, but Tesla is also changing the alloy that the exoskeleton will be made of in order to maintain a durable and sturdy exterior that is capable of handling dings and dents.

Although the truck “will be pretty much” the same size as its prototype, according to Musk, it is unknown what the Cybertruck will look like in its final design right now. Tesla works to improve its vehicles in all facets when they are still in development, and the Cybertruck is no different.

But regardless, the design that “Jim” came up with and managed to manufacture has a striking resemblance to the Cybertruck prototype that Tesla revealed last year. Had it not been for his use of a combustion engine to bring his DIY Cybertruck to live, it could have been considered one of the best attempts at remaking the vehicle. As far as looks are concerned, it is strikingly similar to what may be released at the tail end of 2021.

Let us know in the comments below what you think about the Cybertruck clone!

Tesla fan clones perfect Cybertruck but with one flaw