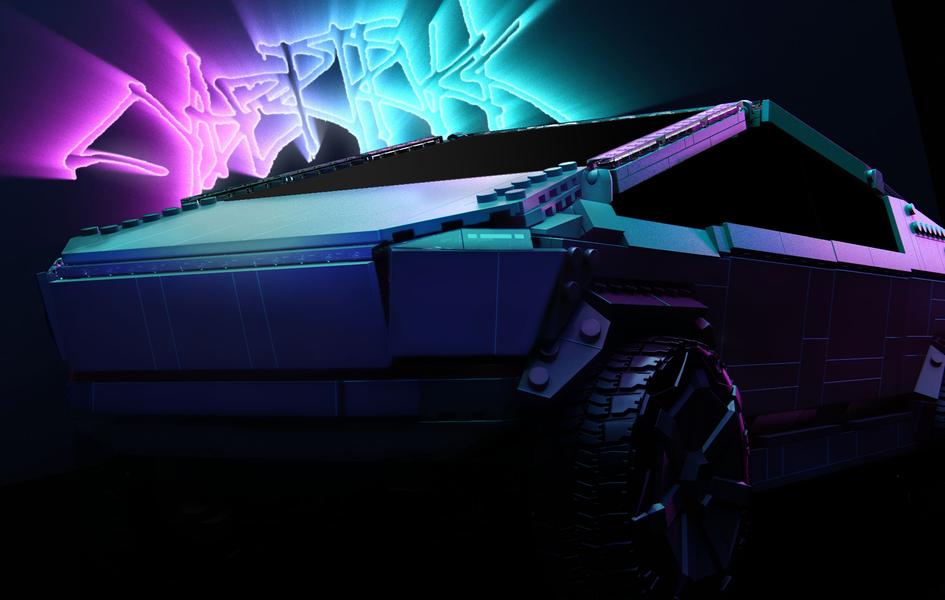 Mattel Creations announced MEGA would be dropping a Tesla Cybertruck build on October 15, 2021, at 9 a.m. Pacific Time. Similar to the Hot Wheels Cybertruck Mattel dropped previously, the MEGA version will feature some specific, unique details that can only be found on Tesla’s electric pickup truck.

Mattel’s MEGA brand produced building block toys for children. MEGA has teamed up with many well-known brands on some of its build sets, including Pokemon, Masters of the Universe, Borderlands, and Halo. According to Mattel’s announcement, MEGA loves the Cybertruck which may be why it decided to drop a MEGA x Cybertruck build.

“Inspired by the original designs from Tesla’s upcoming release, we created a MEGA X Cybertruck you can build brick by brick and customize to reveal different hidden features that can only be discovered while you build it,” wrote Mattel.

“The MEGA designers are committed—even obsessed—with making this model as true to form as possible. With over 3,000 pieces in this building set, you will be able to discover all the details like the sharp-angled exoskeleton, adjustable air suspension, armor glass windows, and even more Easter eggs while you put this brick model together. This buildable MEGA X Cybertruck is the pinnacle of our devotion and literally puts the future in your hands,” read the announcement.

Based on pictures of MEGA’s Cybertruck build, designers appear to be focusing on the Cybertruck displayed during the unveiling event. It will also feature the Armor Glass windows of Tesla’s futuristic pickup truck. The MEGA X Cybertruck build is priced at $250.00. Anyone interested in purchasing the set can explore the Cybertruck build with MEGA’s interactive and immersive AR experience through the QR code in the picture above.

Tesla Cybertruck fans would likely appreciate Mattel’s LEGO-esque version of the all-electric pickup truck. Tesla fans have previously petitioned LEGO to release a Cybertruck build as part of its “Ideas” program. Even after garnering enough votes to be reviewed by LEGO, however, the toy-maker decided to deny the proposed Cybertruck kit. Mattel’s more detailed Cybertruck kit could then be seen as validation of sorts, as it shows just how cool the all-electric pickup truck could be.

At the 2021 Shareholders Meeting, Elon Musk estimated that Tesla Cybertruck production could start by 2023. He mentioned that Tesla is facing supply chain challenges that make production difficult. The pandemic has affected the global supply chain, affecting many different industries, including automakers and tech companies.

The Teslarati team would appreciate hearing from you. If you have any tips, reach out to me at [email protected] or via Twitter @Writer_01001101