Tesla triples European sales in first half of 2019 as regional car market drops 7.9%

As the overall European car market fell nearly 8% in June over last year, Tesla managed to both buck the trend and triple its sales in the region in the first half of 2019. The Model 3 was also Europe’s best-selling premium midsize sedan in June, totaling 11,256 new vehicle registrations.

Tesla sold 14,106 vehicles in Europe which represented a 250% increase in June 2019 over June 2018, according to a press release published by JATO Dynamics Limited providing their market study results. This growth was largely driven by Model 3 sales. While Tesla’s popularity has grown rapidly in Europe thanks to both industry awards and a massive sales push over the last year, the decline in the market overall and interest in battery electric vehicles seems to partially be the result of the region’s fallout with diesel cars. 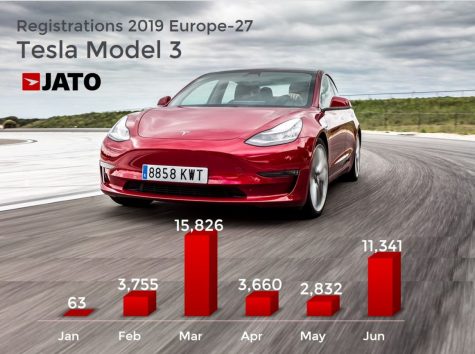 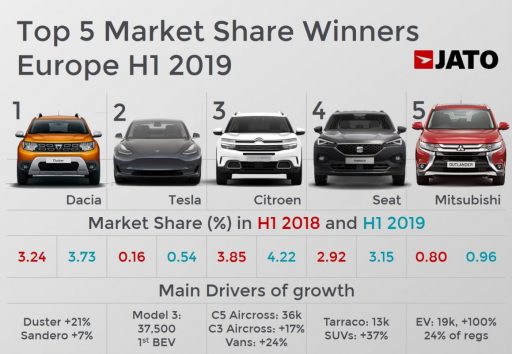 “June’s results confirm that conditions in Europe are getting worse. We continue to see a repeat of the same pattern: lower consumer confidence is mostly affecting diesel car registrations, which used to dominate the European landscape,” Felipe Munoz, JATO’s global analyst, commented in the press release.

Notably, diesel car registrations fell 21% in June over the prior month while demand for electric vehicles (EVs) increased 20%. Although the new car market share for EVs in Europe is only 7.5% right now, the results coming each month are promising, especially year-over-year. Alternative fuel vehicles increased their sales over 2018 nearly 2% while gasoline vehicles only increased 3%. Diesel declined 5%. Battery electric vehicles overall increased 104% over last year.

Tesla’s ability to stand against market trends and increase sales despite the industry odds seems to be a regular accomplishment in recent months. The company increased its market share in Germany this past April despite a declining auto market in the country and even captured sales numbers that gave Tesla more monthly sales than luxury brands Alfa Romeo and Lexus. This year was also a big month for the all-electric auto manufacturer in Norway. At the end of March, nearly 60% of all vehicles sold in Norway last month were battery electric; a large majority of those EVs were Tesla brand vehicles.

The total number of registrations in Europe in June for Tesla vehicles came to 45,400 units, according to JATO. Norway is quickly approaching that number as well with nearly 44,000 total Tesla vehicles registered in the country. In sum, all increasing sales numbers look to bode very well for Tesla in both the immediate and long-term markets.

Tesla triples European sales in first half of 2019 as regional car market drops 7.9%